Daniel Roebuck has some big slippers to fill. 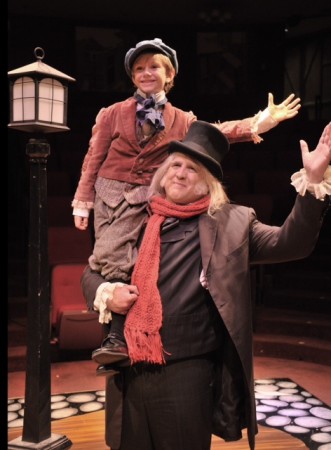 The TV and film veteran is taking on the role of Ebenezer Scrooge in Glendale Centre Theatre’s annual production of “A Christmas Carol” following the death of Mario Di Gregorio, who played the role on and off for 24 years. Di Gregorio passed away July 4.

Di Gregorio, dressed in a night shirt, was recognizable in the theater’s holiday promotional materials. He also had acted in or directed more than 150 other productions at the theater, so they are dedicating the show to Di Gregorio, said Brenda Dietlein, executive producer, who has written a new opening for it.

“We are letting Charles Dickens tell the story,” she said. “Danny applies his makeup on stage and takes us on a journey. We are not doing Mario’s show.”

A lot of technical changes also have been made this year and at a huge expense, but with the change in the lead actor, co-executive producers Tim and Brenda Dietlein thought the time was right.

“Mario would have loved to see what we are doing this year,” Brenda Dietlein said. “He was so much a part of the theater and our lives. We want to implement all the things he shared in developing.”

Roebuck, a Burbank resident, is “fabulous” in the role, she added.

“I think Daniel has a lot of guts to take on this challenge –to fill Mario’s shoes,” she said. “We couldn’t think of another actor who would handle the role better and we didn’t want go with an unknown. Daniel is familiar with the theater — he knows how to play to all sides [of a theater-in-the-round] — and he has worked with the best of the best.”

Roebuck appeared on the TV series “Matlock” and film “The Fugitive”. He brings expertise to the production on stage — and behind the scenes. He makes suggestions to try new things, which makes him really fun to work with, Dietlein said. He has also shown the younger actors how to be committed to a show, even though they aren’t making a lot of money.

“He tells them to give a million-dollar performance every time they come on stage,” she said.

Longtime friends — almost like family — Di Gregorio and Roebuck had discussed privately his giving up the part, Roebuck said. With Di Gregorio’s passing, changing up the production was the sensitive way to make the transition, he added.

The story is about redemption and salvation, which Roebuck believes is glossed over most of the time. There has got to be a moment of change for Scrooge, Roebuck said, although he is transforming throughout the story.

“I will be able to express through my interpretation the transformation in a unique way,” he said, adding that Tim and Brenda are allowing him to explore that.

Over the years, Roebuck has popped in on many productions at Centre Theatre. A few weeks ago, he was called in on an hour’s notice to do “Hairspray” and played three parts. It’s that insanity of the theater that an actor comes to love.

Lots of surprises are in store for “A Christmas Carol”, but Roebuck would only share one.

“The Ghost of Christmas Future is not going to be a man who looks like death,” he said. “It’s going to be a more fluid and beautiful and potentially more dangerous future.”

Roebuck will be playing Scrooge more sarcastically and there will be more comic elements than the production with Di Gregorio.

“It’s different and I’m dedicating the job to him and hopefully he will like it, otherwise I will be haunted by him as the Ghost of Christmas Carol Past,” Roebuck quipped.

Roebuck played Scrooge some 35 years ago when he adapted “A Christmas Carol” for a theater group of developmentally disabled adults back in Pennsylvania.

He also played Scrooge for a production that still can be heard on macabremansion.com, an online site that recreates horror, suspense and sci-fi radio programming from the 1940s through today.

“We did a radio drama a year and a half ago that’s pretty gosh darn good,” he said.

Producers asked Roebuck to recommend actors for the cast, and when the actor playing Scrooge dropped out, Roebuck suggested himself.

“And it turned out really fun!” he said. “So I’ve been whetting my appetite for the role for, let’s say, 3 1/2 decades and I am finally able to sink my teeth into it.”

WHAT: “A Christmas Carol”