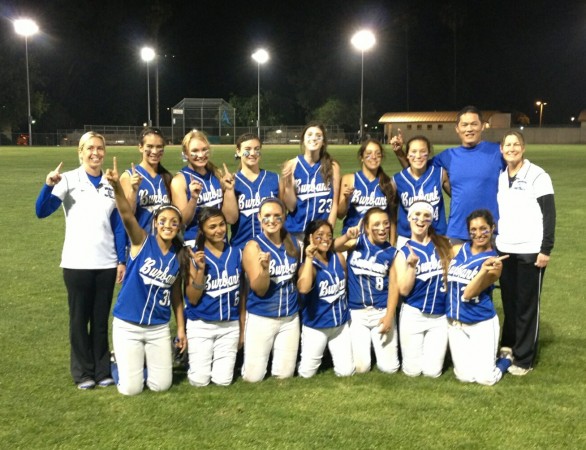 Bring on the playoffs. The Burbank softball team capped off a perfect run through league by defeating Burroughs, 9-0, Thursday night at Olive Park. Behind a one-hitter thrown by Caitlyn Brooks, the Bulldogs again demonstrated why they will be a force to reckon with when the CIF Division II playoffs begin next Thursday.

Burbank had clinched the outright league title last week for the first time since 1987. 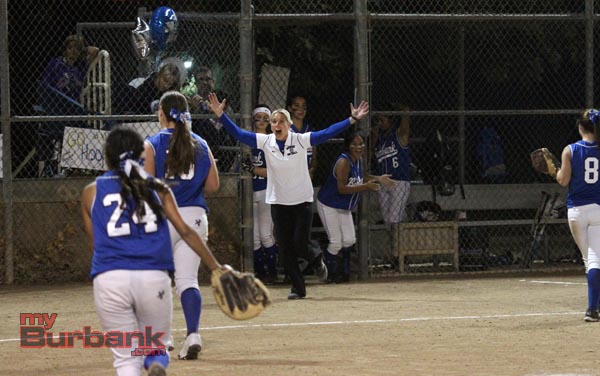 Burbank coach Nicole Drabecki runs out of the dugout with arms wide open after the final out was made (Photo by Ross A. Benson)

“We worked so hard this year. They literally gave me everything. I demanded a lot from them and they rose to the occasion,” Burbank coach Nicole Drabecki said. “I believe this is our only time ever being 14-0 in league. It’s very hard to do. It was a phenomenal run. These girls are awesome. They believe and have hearts of gold. I don’t think one thing will stop us going into playoffs.”

Burbank (24-2, 14-0) swept Burroughs (18-8, 10-4) for the first time since 2008. With the loss, the Indians finished in a three-way tie for second place with Crescenta Valley and Arcadia after winning the league title the past three years. A coin toss dropped the Indians to fourth place for playoff seeding purposes.

“Burroughs is a very good team, very talented. I thought we showed everything of why we are the league champs. We did it with pitching, defense and hitting,” said Drabecki, who is in her sixth season at BHS. “We were very aggressive on the bases. And we were very clutch today and we have not been that way for many years. We were clutch as a team. It’s awesome. I’m so proud of my girls.” 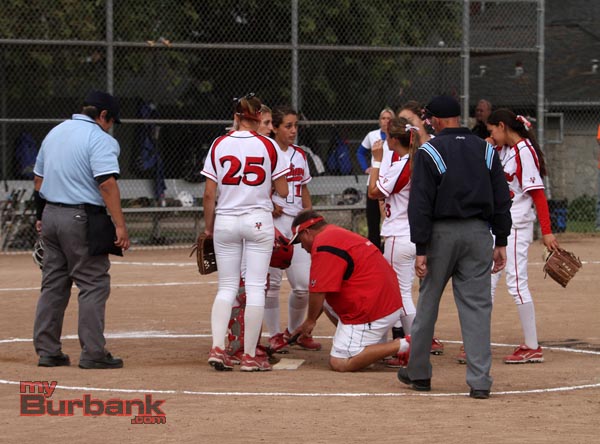 Burroughs coach Doug Nicol had his hands full with the game and the rubber (Photo by Ross A. Benson)

Burroughs coach Doug Nicol did an admirable job dealing with adversity throughout the season. Academic ineligibility and several key injuries derailed the Indians quest to “4-peat.” A season of patchwork and coaching adjustments by Nicol combined with the superb play by Burbank proved to be too much for the Indians to overcome.

All-league catcher Michelle Santiago injured herself on a swing early in the game and never returned. It was a microcosm of their season.

“I’ve coached for many years and this has been one of the most frustrating ones. We had to plug holes throughout the season,” Nicol said. “But I’m very proud of my team. These girls never gave up.”

The Bulldogs broke the game open in the fourth inning scoring four runs to take a 5-0 lead. Three singles, two walks and two errors committed by the Indians led to the big inning. Burbank tacked on two more runs in both the fifth and sixth innings. 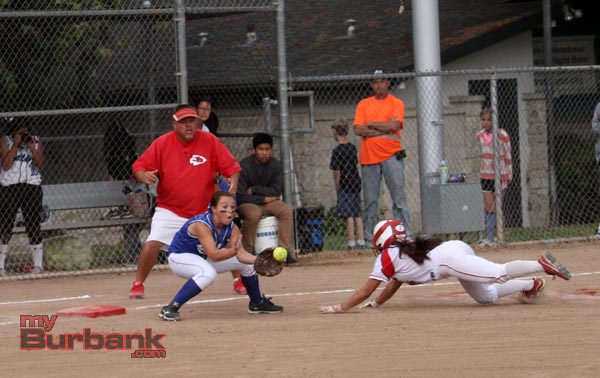 A Burroughs runner is thrown out at third base in the Bulldogs win (Photo by Ross A. Benson)

Meanwhile Burroughs struggled to get anything going offensively until Delaney Nicol singled to right field to lead-off the seventh inning. Brooks lost the no-hitter but finished the game strong inducing a pop fly and striking out the final two batters. She struck out 10 and walked only two. At the plate, Brooks was 3-for-3 with three runs scored and an RBI.

“Our team has been great. I think we are getting better every single time. It’s really fun to win,” Brooks said. “I loved playing for the seniors today. It was a special day for them. Our defense was amazing and our hitting speaks for itself.”

The CIF Division II playoffs begin next week and Burbank is expected to receive the No. 2 seed overall behind Highland. The teams split two games in tournaments earlier this season. Burroughs will either have a wild card game on Tuesday or begin the first round on April 16. 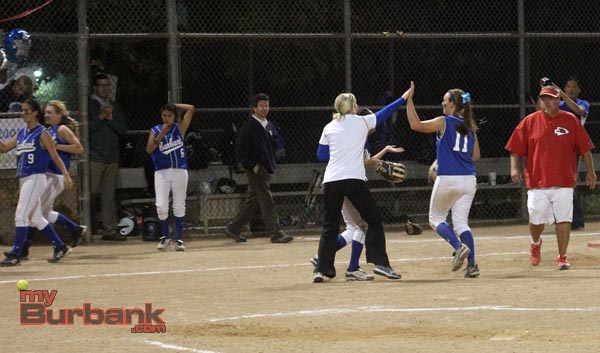 “This team is looking to be a CIF champ. We will take one game at a time. One opponent at a time. We will continue to play fundamental softball and be sound and be confident,” Drabecki said. “I believe in my girls so much and they believe in our coaching staff. I think we are going to get to that CIF title game. I really do. I really feel it.”

With Brooks in the circle and a strong defense behind her, Burbank will have every chance to advance deep into the playoffs.

“We are really excited. Our team is ready to go in there and do our thing and show what we really got,” Brooks said. “We can do great in CIF. It will be fun.”

“It honestly has meant so much. We have worked so hard to get to this point,” said catcher Bridgette Pisa, Brooks’ battery mate, who drove in the game’s first run with a beautiful push bunt to the left-side of the Indians infield.  “We are looking forward to moving on. Everybody is excited knowing their hard work has paid off.”

CIF pairings will be announced Monday afternoon here on MyBurbank.com