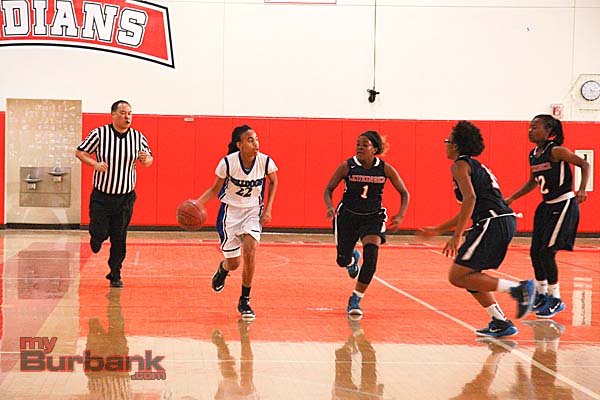 Beware of the Burbank Bulldogs.

Behind a spectacular performance by senior guard Yazzy Sa’dullah, Burbank cruised to its third victory in a row crushing Leuzinger, 75-45, to advance to the West Coast Holiday Classic Silver Division semifinals. The Bulldogs will play Brentwood at 4:30 p.m. today at Burroughs.

“We are 3-0 in this tournament and doing what we need to do against who we are playing,” Burbank coach Bruce Breeden said. “We are hitting our stride and doing the things we need to do.”

Sa’dullah put on a show as she scored 36 points, grabbed 15 rebounds, dished out six assists and collected six steals. The West Virginia-commit also knocked down five three-pointers and made 13 of 14 free throws.

“I don’t feel pressure to carry the team,” Sa’dullah said. “I know if I play my best, nine out of 10 times we are going to win. Now that I know where I am going, there is no pressure and I’m relaxed and just playing.”

Burbank (7-5) faltered in its previous tournament losing the final two games. The Bulldogs have come together playing unselfish and tough-nosed basketball. The results have been positive as Burbank has strung together three consecutive double digit victories (Marshall, 44-33), (Douglass, 63-47) and (Leuzinger, 75-45).

Sa’dullah set the tone early against the Olympians scoring 13 points in the first quarter including three three-point bombs that propelled Burbank to a 22-11 lead at the end of the period.

In the second quarter, Sa’dullah became aggressive attacking the basket at will. She didn’t settle for the long ball but rather attacked relentlessly and got to the foul line where she made seven of eight free throws.

Leading 23-11, Sa’dullah went strong to the hoop and missed the layup only for 6-foot-6 center Anastasia Tsybaeva to follow up the miss with a put back. Tsybaeva had another put back moments later as the lead increased to 31-11.

Bulldog guard Ani Temurian made a large impact in the second quarter scoring eight points including a medium range jumper and layup for a 37-14 advantage.

On the final possession of the first half, Temurian received a skip pass from Christina Mrtchyan and drilled a long two-pointer at the buzzer in front of the Leuzinger bench to give Burbank a commanding 46-17 lead into the break.

Sa’dullah scored 20 of her 36 points in the first half while Tsybaeva added 11 and Temurian with 10.

Leuzinger came out in the third quarter on a 6-0 run to force a Burbank timeout. The Bulldogs responded when Tsybaeva made a beautiful drop step to her right and banked in a left-handed hook shot. Sa’dullah followed with a running baseline jumper and the lead ballooned back up to 50-23.

Burbank took a 59-28 lead into the final period and in full control.

Sa’dullah made her fifth three-pointer early in the fourth quarter and the lead swelled to 63-30.

Temurian’s 12 points were big for the Bulldogs as she scored in double digits for the second straight contest.

“That’s two games in a row. I am very pleased with her right now,” Breeden said.

Burbank has two games remaining in the holiday tournament and then opens Pacific League action on January 6 at Arcadia.

“We are really playing well together. It’s been a work in progress,” Breeden said. “We weren’t all playing together during the summer. I think we got it together now and are heading in the right direction. We share the ball a lot and playing a lot harder.”

The Indians broke open a close game to lead 41-30 only for Arbor View to roar back and cut the deficit to 46-44. But Abbey Ibarra’s clutch three-pointer with three seconds left gave Burroughs an insurmountable 49-44 lead en route to the big victory. Burroughs is 3-0 in the tournament as well.