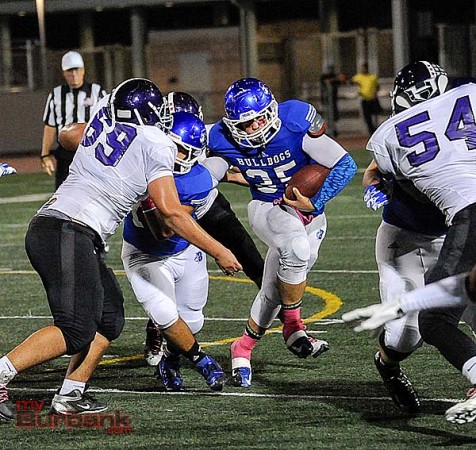 The Burbank High football team has suffered its share of injuries this season. But the Bulldogs have overcome some of the difficult obstacles they have faced.

They showed that Friday night when they defeated visiting Hoover High, 48-7, in a Pacific League contest at Memorial Field.

The second half was played with a running clock after Burbank held a 41-0 halftime lead. 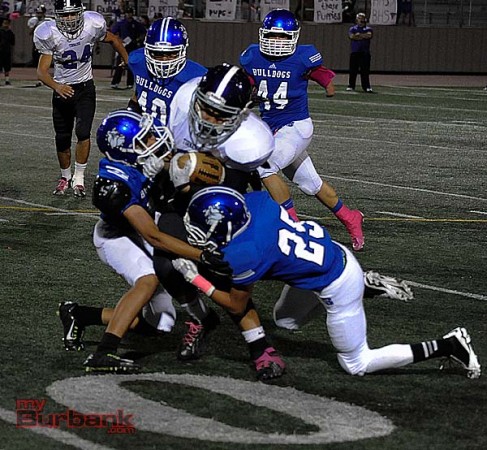 “The start of our season was treacherous,” Burbank coach Richard Broussard said. “We played some very good teams and we got hurt. That made things a little harder for us. But the good thing is we brought up three kids from the junior varsity this week. Two of them started and one played a ton.”

Moving up to the varsity were sophomores Miguel Vasquez, Joey Miller and CJ Mayes.

“Those three guys we brought up for depth reasons and they got their first bit of varsity love,” Broussard said. 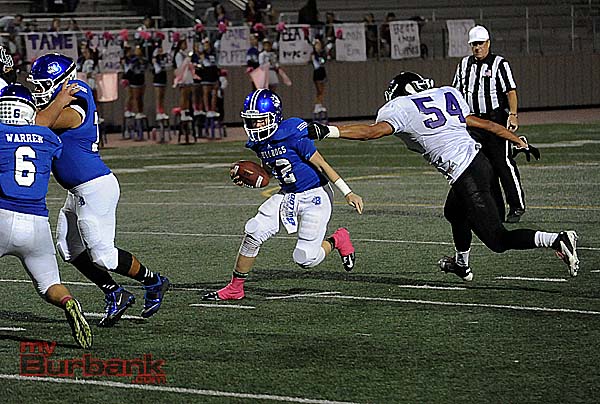 Sophomore Guy Gibbs played quarterback in place on injured senior Ryan Meredith. He finished 6 of 11 for 126 yards and two touchdowns.

“We had a job to do and we did that,” Broussard said.  “I’m glad we won and that everyone got to play.”

Burbank (5-3, 3-2 in league) opened the scoring as sophomore Nick Warren scored on a two-yard run with 7:56 left in the first quarter.

The Bulldogs added to their lead as Miller recovered a Hoover fumble on a punt and dove into the end zone from two yards out.

Junior Brandon Alba scored on a 60-yard run with 1:47 left in the first quarter to put the Bulldogs up 20-0.

Alba added a second touchdown early in the second quarter as he scored on a 46-yard run with 10:38 left in the first half. Harry Avetisyan added the extra point.

Burbank went up 48-0 at the 8:09 mark of the third quarter as fullback Kyle Alvarez scored on a nine-yard run.

“Hoover came out and fought hard. You have to tip your cap to them,” Broussard said. 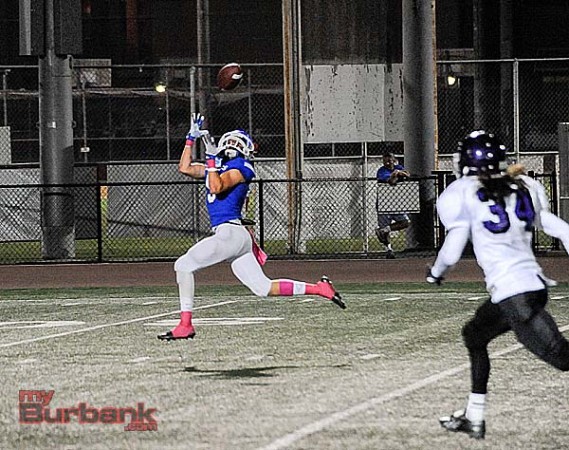 Dorian Housholder hauls in a touchdown (Photo by Craig Sherwood)

Broussard said it has been tough to see some of his top players out of action.

“We had an all-star team on the bench watching our walk-through yesterday,” he said.

With two weeks left before its game with arch-rival Burroughs, Broussard is optimistic his team will be healthier for the big game.

“Other than James (Williams), I expect everyone to be back at full strength,” Broussard said.

Williams, a running back and a Washington State commit, is out for the season after tearing his medial collateral ligament and his anterior cruciate ligament in his left knee.

The Bulldogs need to win their remaining two games (against Arcadia on Thursday and vs. Burroughs on Nov. 7) to make the playoffs as the third place team from the Pacific League.