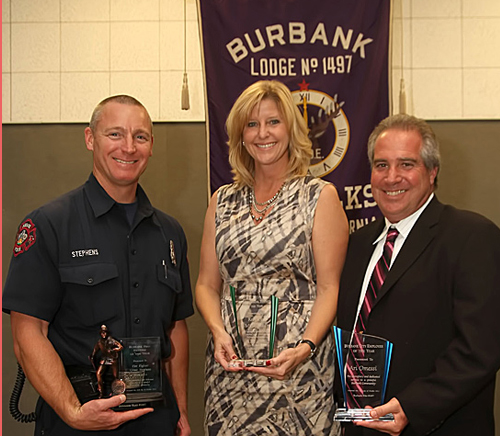 Story By John Savageau
Photos By Ross A. Benson
BurbankNBeyond

Burbank’s leadership and residents gathered at Burbank Elk’s Lodge  1497, on Wednesday evening to recognize and honor four of the city’s finest at the 3rd Annual Community Service Awards.  The awards are presented to those representing the highest standards of community service through both exceptional job performance, as well as continued contributions to the welfare of Burbank.
Receiving Community Service Awards were Burbank Police Officer of the Year, Officer Harry Terrill; Burbank Fire Fighter of the Year, Fire Fighter Grant Stephens; Burbank City Employee of the Year, Ari Omessi; and Burbank Teacher of the Year, Rebecca Mieliwocki.
Council Member Gary Bric opened the ceremony noting that when you think of Burbank, the image is one of high quality city services, an excellent education system, as well as confidence residents and visitors have in security provided by public safety and emergency services.

Burbank Police Chief Scott LaChasse highlighted Terrill’s extensive experience in law enforcement, participation in the community, and character as traits distinguishing him as a leader and role model within the police department.  Born in Salt Lake City, a graduate of Brigham Young University and Woodbury College, Terrill was drawn to Burbank where he has served as a patrol officer, bike officer, and now a training officer where his expertise is highly regarded among peers and young officers.  A two-time winner of the Mothers Against Drunk Driving (MADD) Award, Terrill is noted for his high number of DUI arrests, and his efforts to keep the community safe.

“Being a fire fighter means becoming part of the community” explained Fire Chief Ray Krakowski.  Having joined the Burbank Fire Department in 1999, Fire Fighter Grant Stephens is “somebody willing to give back to the community.”  Selected by his peers in the fire department, Stephens distinguished himself through not only personal credibility and commitment to the safety of Burbank as a fire fighter, but also donating his time as project manager of the Burbank Firefighter’s “Fill the Boot” campaign, a fund raiser for the Muscular Dystrophy Association – raising an incredible $40,000.

Burbank Director of Public Works, Bonnie Teaford, described the professional journey through the ranks by Ari Omessi.  Omessi came to work with the city in 1982 as a temporary employee.  Quickly grabbing attention at public works as “a keeper,” Omessi was offered a permanent position, and by 1995 was promoted to senior mechanic, serving in a variety of city departments, including the police department.  Since then he has continued his career at public works, and now serves as project manager in numerous capital projects, including renovation of the Burbank Police and Fire Department headquarters.

Mieliwocki, a teacher since 1995, is known for her compassion, caring, outreach, and ability to touch students on a personal level – even troubled students.    As a 7th grade English teacher at Luther Middle School, Mieliwocki believes teachers should treat students with the same level of commitment and respect as a parent would provide.  Mieliwocki will represent Burbank in the California Teachers of the Year Program, a further tribute to her stature and respect given her contributions to Burbank education.

The Community Service Awards included recognition and certificates from the LA County Mayor’s Office (Mike Antonovich), the City of Burbank, the State of California, and the Burbank Elk’s Lodge.  Burbank Boy Scout Troop 210 provided a Color Guard and support to participants.

BurbankNBeyond’s video crew was also on scene and will have a video report on the night’s activities a little later.