BURBANK HIGH — Winners of four straight behind stellar pitching the Burbank baseball team went into Friday night’s contest against Crescenta Valley hoping to get back into the Pacific League’s title picture. 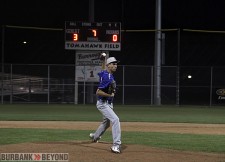 The Bulldogs had the right guy on the mound in lengthy lefty Daniel Starkand who had been the winner of so many close games this season. Unfortunately, at some point a championship team needs at least a little offense to win against other teams with championship aspirations.

Starkand did his thing, throwing seven innings of one-run ball, however, he left with a no-decision and the Bulldogs eventually stranded 13 runners in a 10-inning loss to the Falcons, 2-1.

CV’s Ted Boeke drove in Bryan Wang with one out in the top of the 10th inning to lift the visiting Falcons to hard-fought victory against Burbank.

The loss drops Burbank to 6-3 in the Pacific League standings which means they are now two game behind CV (8-1 in league) and three behind league leading Arcadia (9-0 in league). With six games remaining on the schedule it all but assures the Apaches and Falcons will battle it out for the league championship again with the Bulldogs hoping to keep a lock on third place — which would be their best finish since coming to the league in 2006.

Burbank dropped an 8-5 game at CV last month after leading 5-3 after five innings of play. It lost a 2-1 contest to Arcadia earlier this month so no matter things end-up Burbank will be left wondering what might have been.

Missed opportunities may have haunted the Bulldogs this season, that wasn’t the theme on Friday night so much as it was “bad luck.” Burbank nearly won in the bottom of the seventh when pinch-hitter Angel Villagran delivered deep blast  to right-center field. The ball just hit off the top of the fence and he was held to a very long single.

“That missed going out by about two feet,” Burbank Coach Bob Hart would say later. Following two walks, the Bulldogs had the bases loaded and two outs. Paul Frias lined out hard shot to third base.

In the ninth inning, Dylan Mersola walked and Harrison Hernandez follwoed with a single before a punchout thwarted the threat.

Even the winning single by Boeke was a break for the Falcons as he chopped the ball towards Burbank second baseman CC Okimoto and took a high hop just as the infielder was about to make the play. The ball rolled out into left-center field and Wang was able to reach home without a play.

On the flip side the Burbank offense was MIA again as its only run came on consecutive errors by the Falcons’ infield in the third inning. It never solved CV starter Kyle Murray or reliever Troy Mulcahey who held Burbank to five hits and no player had multiple hits.