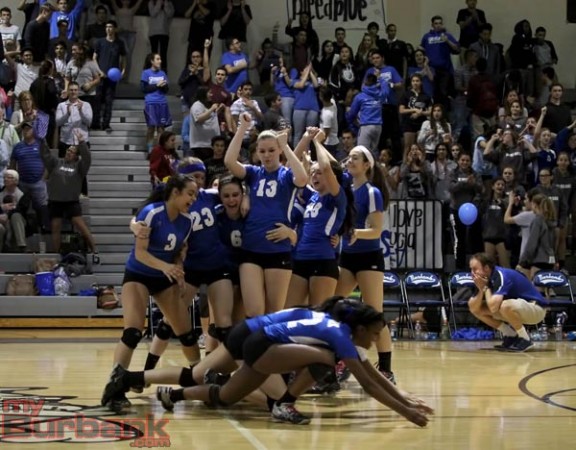 Burbank begins its celebration while Coach Kyle Roach gathers himself (Photo by Ross A. Benson)

City bragging rights were the only things that mattered coming into Tuesday’s rivalry match. With the league standings solidified prior to the match, Burbank and Burroughs ended the regular season celebrating senior night and berths into the CIF Playoffs.

The second place Bulldogs overcame early deficits in all three sets to defeat Burroughs 26-24, 25-20, 25-17 to improve their record to 21-5 overall and 12-2 in league. The Indians fell to 10-17, 9-5 but have clinched third in league. CIF playoff matchups will be released at the end of the week. 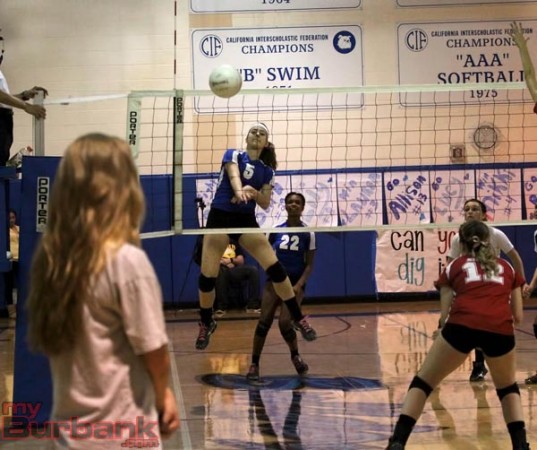 Senior Denise Daniel, #5, played an outstanding match for the Bulldogs (Photo by Ross A. Benson)

“I think we’ve been playing pretty well. We still have to keep working and get better,” Burbank first-year coach Kyle Roach said. “For the last few weeks I really like where we’ve been. The girls have been working hard and they want it. Hopefully we can keep doing what we are doing.”

Seniors Denise Daniel and Rose Cowart led an experienced Burbank squad to a sweep of Burroughs in the season series. Daniel recorded nine kills while Cowart had seven kills and 15 digs.

Burroughs came out the aggressor taking an early 6-1 lead in the first set only for Burbank to forge back and go ahead 11-9. Riding the hot hitting of 6-foot-3 freshman Marin Grote, the Indians regained the lead and were on the verge of taking the first set leading 23-20. 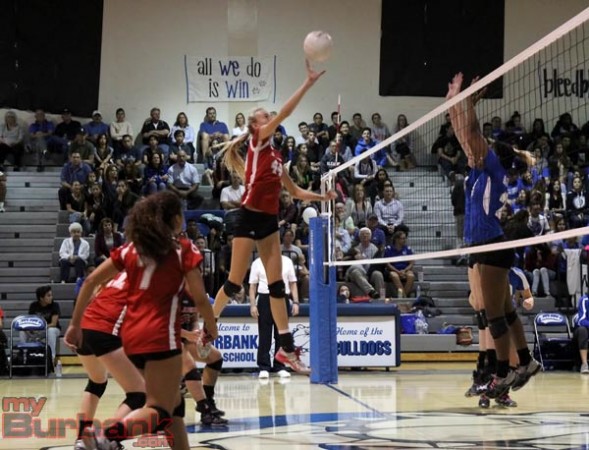 Freshman Marin Grote, #44, carried the Indians in the first set (Photo by Ross A. Benson)

However, Burbank ended the first set on a 6-1 run with Daniel slamming three straight kills to overcome a 24-23 deficit and giving the Bulldogs the 26-24 win. Grote had six of her nine kills in the set.

“We knew coming in that the matches are always tight,” Daniel said. “The first game really woke us up. We just can’t show up. We need to be on our game. We rallied and it was momentum. We were good when we needed to be.”

“The first half of their run and our run was a product of senior night and being emotional,” Roach said. “Then it became normal volleyball back and forth, back and forth. Those runs were everybody just on edge a little bit. Theirs and our side.”

Burroughs came out strong again taking a 15-11 lead in the second set. Trailing 17-14, the Bulldogs made their push and scored five consecutive points behind two kills from Daniel and one from Cowart to lead 19-17. Burbank closed out the set on an 11-3 run to win 25-20. 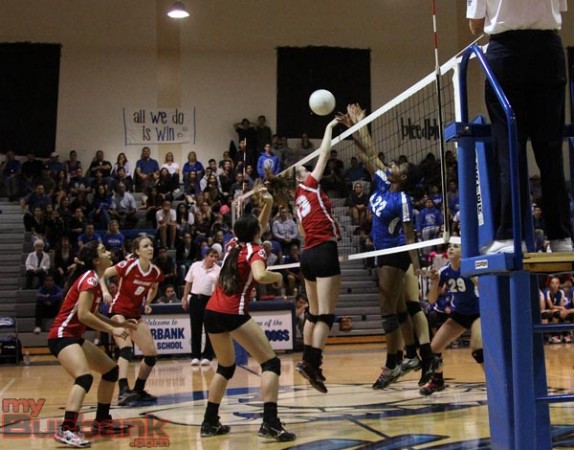 Burbank’s Rose Cowart and Burroughs’ Caleigh Paster battle for the ball (Photo by Ross A. Benson)

Burbank rode the momentum and took the third set rather easily, 25-17. Burroughs committed multiple unforced errors and fell too far behind before mounting a brief rally towards the end. The Bulldogs final three points came courtesy of three straight hitting errors by the Indians.

Burroughs had multiple chances to gain control of the match only to let Burbank slowly come back and eventually seize the sets. The Indians are young with only three seniors but the future is bright for Coach Edwin Real.

“We are doing everything to win for our seniors,” he said. “But the future does look nice.”

The Indians will open on the road as the third place team from the Pacific League. 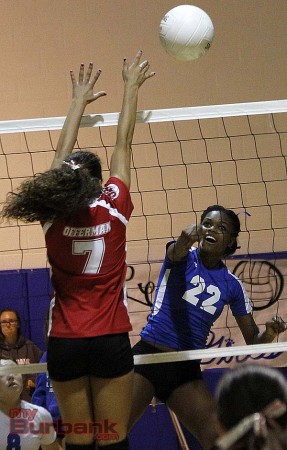 “There has been a different type of motivation. Over the last two or three matches, we were kind of set in our place,” Real said. “Obviously this game had some pride in it but we are ready for the playoffs. We played some really good teams and our record shows that we are not really that good. But we are better than what our record shows.”

Danielle Ryan also put in a good effort for JBHS with nine kills.

Meanwhile, Burbank has gathered steam towards the playoffs playing consistent in all phases of its game. The Bulldogs have won five consecutive matches by the score of 3-0.

The Bulldogs will open either at home or on the road in the postseason. Nine seniors will be looking to extend their season another day. Sara Treadway (26 assists, 10 digs), Ashlyn Edwards (six kills), Allison Tiegs, Lily Winn and Nicole Mailhot each contributed to an outstanding season for BHS.

“We are all excited for the playoffs,” Daniel said. “We’ve progressed so much from the first half of the season till where we are now. Our offense has gotten better and our defense has been the rock of our team.”