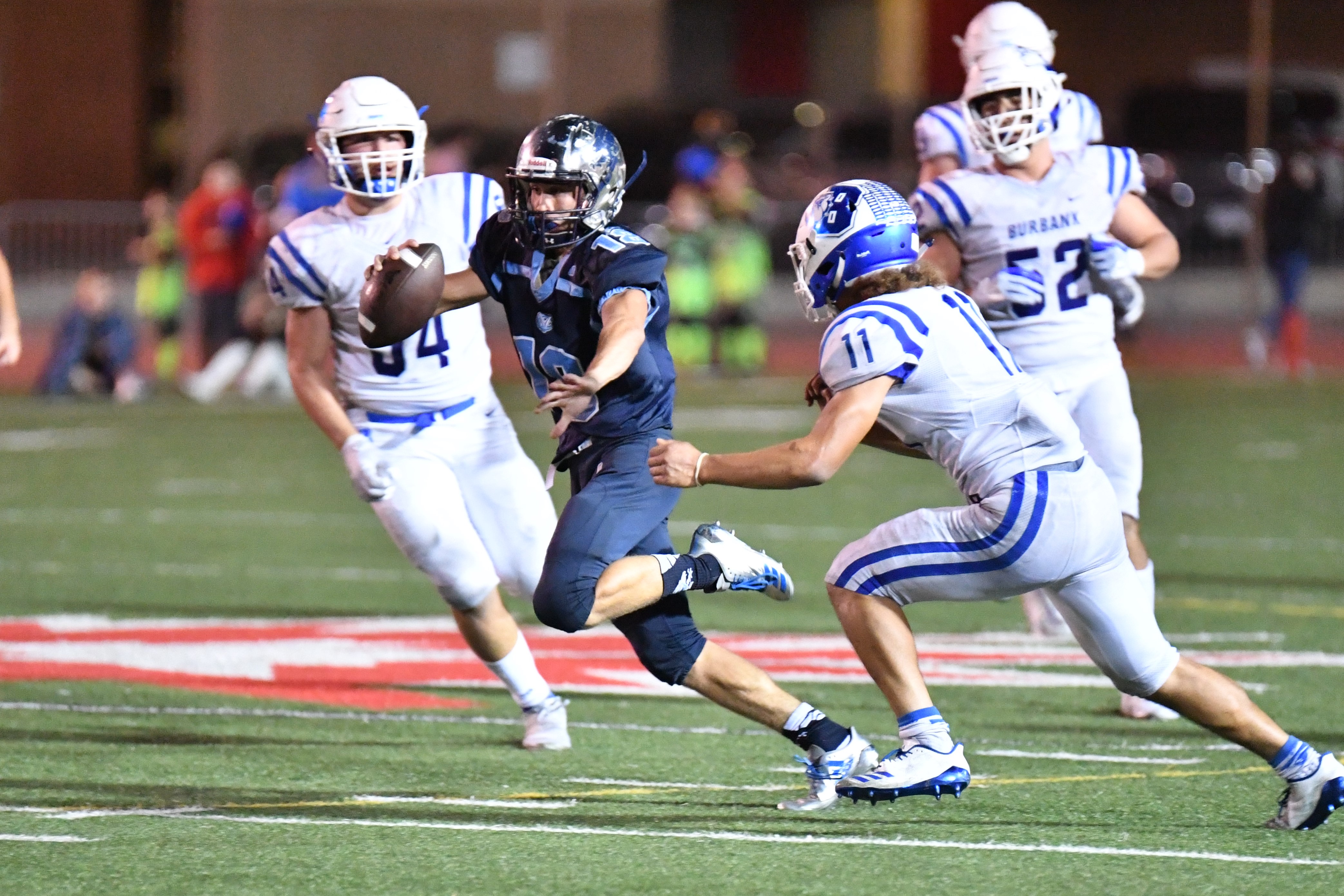 There is now only one undefeated football team in the Pacific League and that’s Burbank High.

The Bulldogs played their best overall game this season against Crescenta Valley after posting a 37-20 victory on Friday night at Moyse Field.

Crescenta Valley (7-1 and 4-1 in league), which came into the contest having collected 12 straight league triumphs and is ranked No. 2 in the CIF Southern Section Division VI, drew within 27-14 with seven seconds left in the third quarter and 30-20 late in the fourth quarter.

“So proud of the kids. The adversity they’ve been through and we talked about it before the game,” Burbank coach Adam Colman said. “Last year’s team was the furthest we’ve gone in CIF history [losing in the championship game] and we were senior heavy. A lot of these kids were forgotten. And so it’s a kind of chip on your shoulder.”

Burbank’s defensive line was one difference as it kept junior quarterback Cole Doyle on the run all evening.

Right out of the gate, the Bulldogs took advantage of excellent field position after the Falcons were forced to punt from their one-yard line.

Burbank took over at the Crescenta Valley 21-yard line and after an 18-yard pass from junior quarterback Matthew Porras to junior tight end Duncan Smith, senior tailback Darnell Williams punched it in from three yards as 9:13 remained in the first quarter.

The key plays on the 76-yard, five-play march were a 31-yard strike from Porras to senior wide receiver Drew Pendleton that placed the ball at the Falcon 40-yard line and a 40-yard catch by Pendleton (144 yards on seven receptions) that put the ball at the one-yard line.

Burbank’s lead swelled to 20-0 when Porras orchestrated a 68-yard, 11-play excursion that was capped off when Williams (52 yards on 20 carries) found the end zone on a four-yard scamper with 5:42 on the clock.

“That’s a great team,” Colman said of the Falcons, who gained 297 yards. “There’s a reason they’re 7-0. They haven’t faced adversity like we have. We knew if we stuck around and be competitive, that we had that on our side. We’re used to adversity.”

The tally was made possible on an interception from senior defensive back Louie Torres, who had two picks.

Colman also praised the defense and specifically the defensive line.

“They did a great job,” he said of senior Anthony Lira, junior Karo Koshkaryan and Smith. “They’re all over the place. In the backfield and creating havoc. When you’ve got guys and they’re big guys, it’s tough to see over them.”

The Falcons played much better in the second half, but the deficit was simply too much.

Doyle’s one-yard keeper with 6:32 left in the third quarter trimmed the lead to 27-7 and came after Porras was intercepted by sophomore outside linebacker Chase Center, who also recovered a Porras fumble.

It took one play for the Falcons to get within 27-14 when Doyle (102 yards on 14 rushes) raced 60 yards as seven seconds remained in the third period.

Doyle (10 of 32 for 160 yards and two picks) then drove the Falcons from their eight-yard line and ended the drive with a 39-yard toss to senior tight end Austin Novak (49 yards on two receptions) that made it 30-20 after Doyle’s two-point conversion pass failed with 5:21 on the clock in the fourth period.

The Bulldogs added a touchdown that made it 37-20 when Porras found senior running back Blake Quinteros with a three-yard strike as 2:35 remained.

Burbank will play host to Muir next Friday at Memorial Field and commences at 7 p.m.