For the Burbank High football team, it was about time for its offense and angles for its defense when it faced Crescenta Valley.

Seemingly from the start, the Falcons were all over junior quarterback Aram Araradian, who had roughly three seconds to get rid of the football.

This is how it went on Burbank’s first series, which began at the Bulldog 29-yard line: senior running back Isaac Glover had a two-yard run. On second down, Araradian’s pass to junior wide receiver Brandon Pena went for no yards and on third down, Araradian was sacked for a six-yard loss.

The two defensive linemen chasing and harassing and causing nightmares for Araradian (13 of 26 for 250 yards with two interceptions) were 6-foot-7 senior Chuck Meyer and 6-6 Logan Tourville. 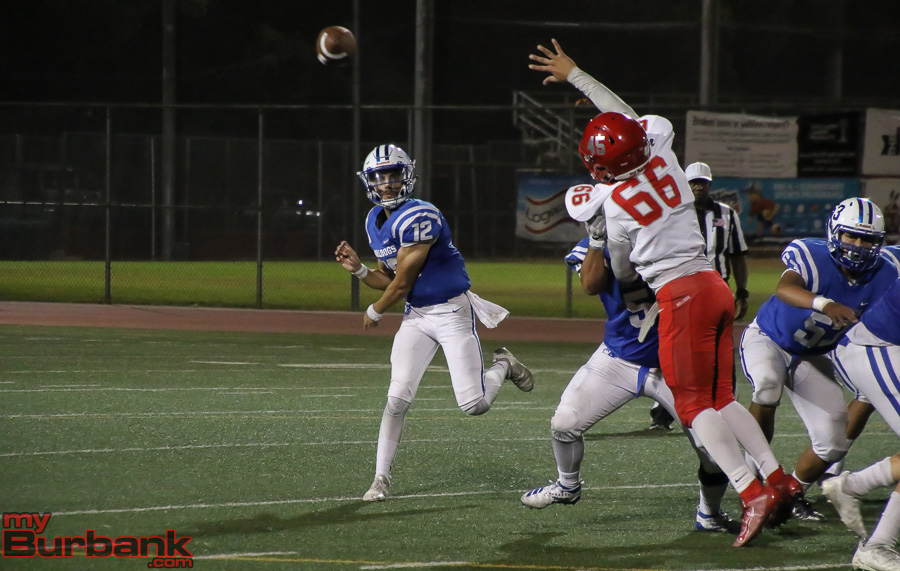 Quarterback Aram Araradian, shown in a win over Pasadena, had an off night against Crescenta Valley. (Photo by Ross A. Benson)

Neither occurred and as a result, Crescenta Valley remained unbeaten and coasted to a 45-14 Pacific League win over the Bulldogs at Glendale High’s Moyse Field on Friday night.

“Every phase of the game, mentally, physically, emotionally, they took it to us,” Burbank coach Adam Colman said. “They were hungrier than we were and that was evident.”

Colman added: “A lot of those seniors were sophomores and we’ve gotten them the last couple of years and they came out mad about that. They wanted to get back and be a championship team and set themselves up for a playoff run.”

There were two bright spots for the Bulldogs (242 total net yards) and the first was Araradian’s 56-yard scoring pass to Pena (122 yards on eight catches) with 1:52 left in the opening quarter that evened the game at 7-7 and closed a 75-yard, five-play trek.

For much of the evening, Araradian was running away from the Crescenta Valley defense which sacked him five times for minus-forty yards.

Crescenta Valley (6-0 and 3-0 in league) proved too good from the start as it moved ahead 7-0 when junior running back Sebastian DeLeon capped a 60-yard, five-play excursion with a one-yard run and 8:03 left in the first quarter. 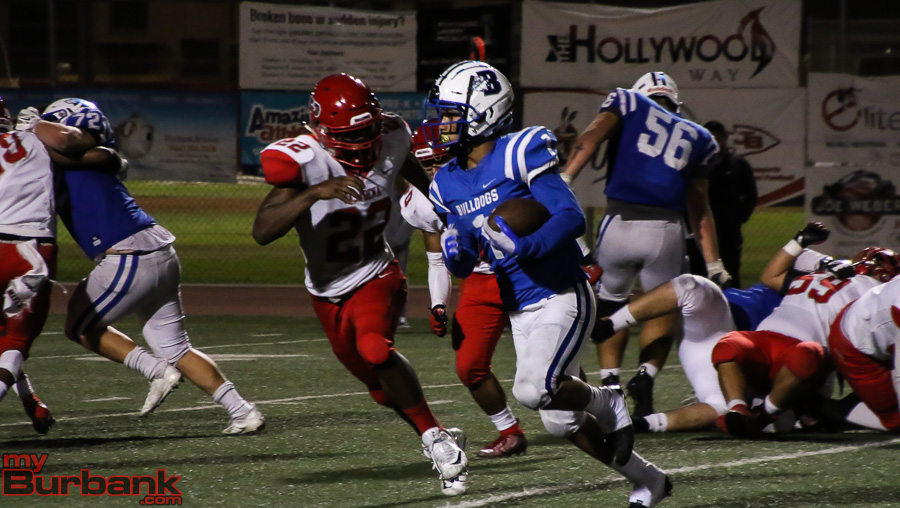 Senior runnning back Isaac Glover, pictured in a recent Pacific League game, had a rushing score for the Bulldogs against the Falcons. (Photo by Ross A. Benson)

The Falcons were knocking on the door two possessions later, but senior running back Maximus Grant (109 yards on 22 carries and 65 yards on two receptions) fumbled at the Burbank two-yard line as the ball squirted into the end zone.

On its next series, Crescenta Valley, the CIF Southern Section Division X No. 1 ranked team, did score to make it 14-7 as senior quarterback Chase Center (13 of 18 for 252 yards) located senior wide receiver Angel Ochoa with a short pass which resulted in a 47-yard touchdown as 8:17 remained before halftime.

Ochoa, a defensive back, would add an interception and a 65-yard return with 4:21 left in the contest that made it 45-7.

“We’re talking about a team, in terms of Burbank, that was scary offensively, that highly-touted quarterback [Araradian], and he is good, I’m not saying he’s not, but once again you saw what our defense can do,” Crescenta Valley coach Hudson Gossard said of his stifling defense. “Late score at the end. We held them to seven points basically the entire game.”

With 2:51 showing before the intermission, Center (59 rushing yards on 12 carries) had the ball at the Crescenta Valley 47-yard line and six plays later hooked up with senior wide receiver Colby Rees (87 yards on four receptions) on a 20-yard strike as the Falcons’ extended their lead to 21-7.

The next time Crescenta Valley, which only punted once, had the football, it marched 61 yards on six plays and ended when Center drilled Rees with a 24-yard laser for a 28-7 edge as 45 seconds remained.

The Falcons (418 total yards) took the second half kickoff and made it 35-7 when Center hit Rees with a 22-yard scoring pass as 6:49 was left in the third quarter and finalized an 11-play, 67-yard drive.

When sophomore kicker Anthony Sharlakian converted a 30-yard field goal with 2:01 on the clock in the third period, the Falcons zoomed ahead 38-7.

Burbank’s next league match will be play on Friday at 7 p.m. when it hosts Muir at Memorial Field.