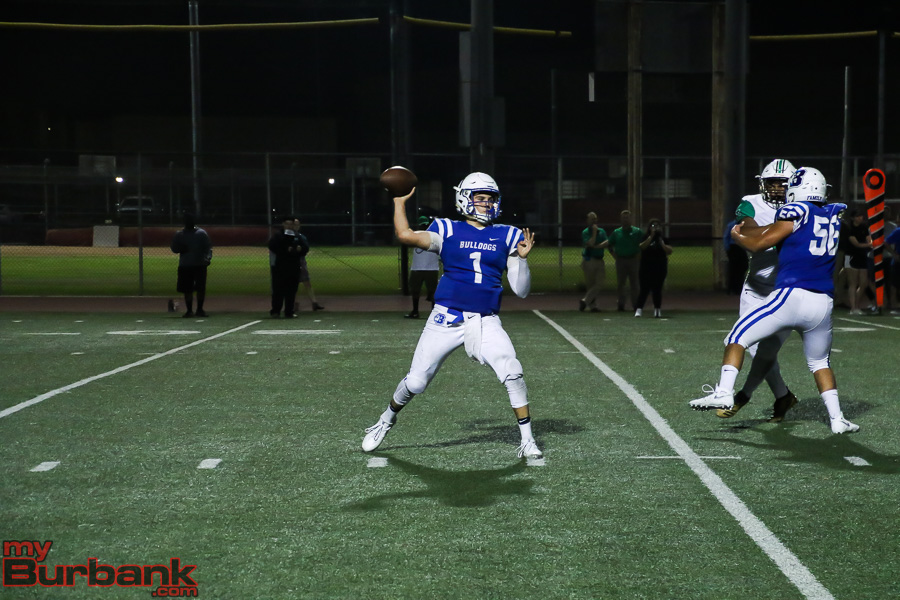 If Xavier Ford didn’t suit up for Glendora High Friday night, Burbank might still be in the CIF Southern Section Division 5 playoffs.

The Glendora junior tailback had 20 carries for 295 yards and five touchdowns, as the Tartans defeated Burbank High 56-35 in a first-round contest at Citrus College.

“It was all due to the offensive line. It was a team effort,” Ford said. “I’m just happy we got the win. They (Burbank) were a very respectful team. All props to them.”

The loss ends the season for Burbank at 7-4. Second-year coach Adam Colman was very emotional when speaking about his players, many of which he coached at the junior varsity level two years ago.

“It’s a special group. A lot of them were along for the ride in 2016. They showed the heart of champions last year and this year. I’m proud of them,” Colman said.

“For four years everyone put everything on the line. We didn’t go down without a fight,” Porras said. “Everyone cares so much about each other. It’s been an unbelievable ride having your brothers behind you.”

In the final game of his career, Porras completed 27 of 39 passes for 337 yards with five touchdown passes and just one interception.

Ford scored the first touchdown of the game at the 7:01 mark of the first quarter, by taking his first carry 70 yards into the end zone.

Burbank came right back as Porras hooked up with Chadz Vang on a 11-yard touchdown at the 5:23 mark of the first quarter.

Glendora (10-1) regained the lead with 1:54 left in the first quarter when quarterback Jacob Gonzalez hooked up with receiver Cade Marshman on a 36-yard touchdown.

Gonzalez and Marshman hooked up again at the 8:15 mark of the second quarter, this time from 35 yards, pushing the Tartans to a 21-7 lead.

Ford’s 53-yard run 3:00 left in the first half pushed Glendora out to a three-touchdown lead.

Things didn’t get any easier for Burbank in the second quarter when offensive lineman Kris Azizkhani went down with a leg injury and defensive lineman Karo Koshkaryan was ejected for throwing a water bottle in frustration following a Glendora touchdown.

Porras and Eric Harutyunyan hooked up for two late touchdowns, both from 12 yards out.