But the reality is that the Bulldogs didn’t play close to their best in the Pacific League victory.

“I’m not happy. It is disappointing. I’m making no excuses. We expect to come out and play football. It happens every Friday night at 7,” Burbank coach Richard Broussard said. “The kids know that. They prepare all week for it. I’m not happy with the performance. We could have been a lot more sharp going into a league championship game.  The ramifications of that game are key. That’s why we prepare in January for games like this.”

Pasadena returned the game’s opening kickoff for a touchdown, but never seriously threatened to score again.

Burbank got a pair of 35-yard field goals from Andrew Rovira in the first quarter. 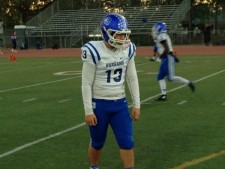 The breakthrough came early in the second quarter when Anthony Lira blocked a Pasadena punt deep in its own and Drew Pendelton picked up the loose ball and easily returned it for a touchdown.

Pasadena fumbled the ball away of its next drive and Darnell Williams scored on first down with a 5-yard run to make it 19-7.

Burbank added to its lead in the third quarter when quarterback Guy Gibbs and Jake Kelley connected on a 59-yard touchdown pass.

Gibbs and Forest Fajardo hooked up on a 25-yard touchdown later in the third quarter to push the lead to 40-7.

Next week Burbank will host Crescenta Valley at Memorial Field in a battle of the only two remaining unbeaten teams in league.

“I’m excited to see how we look,” Broussard said. “ I think we’ve got great kids, but this game I’m over it.”

Gibbs finished 13 of 31 for 229 yards passing with a pair of touchdowns and one interception.

“On offensive we didn’t execute things well in the beginning,” Gibbs said. “We have a big week ahead of us. We have to study in the film room and execute during the week. We have to work on what we do and watch and see how they play and we need to play harder next week.”

Andy Reyes, the reigning Pacific League Defensive Player of the Year, tweaked his left knee attempting to make a spectacular interception. He did not return, but appeared confident he will be able to return next week.