Hoping to locate the win column after suffering a stunning 20-13 nonleague loss to Ayala, the Burbank High football team will host Canyon tonight at Memorial Field with a 7 p.m. kickoff.

That loss took away some of the steam after the Bulldogs defeated powerful Monrovia, 38-20, in the season opener, so second-year Coach Richard Broussard and his staff shouldn’t take anything for granted against the Cowboys.

Canyon lost to talented Calabasas and Thousand Oaks by scores of 48-14 and 53-26, respectively, but bounced back and routed Eastside, 33-14.

This will be an excellent test for the Bulldogs, who are expected to compete for the Pacific League title, which begins next week.

Burbank junior quarterback Guy Gibbs has started two games, and is getting used to the speed at which varsity football is played. 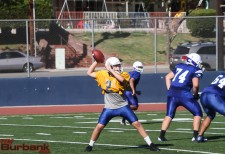 Quarterback Guy Gibbs will need to play well versus the Cowboys. (Photo by © Ross A. Benson)

Gibbs has been efficient after throwing four touchdown passes with two interceptions.

Gibbs averages 114 passing yards per game, and though these numbers are decent, they should improve with experience.

Burbank’s strength is its potent running attack which is led by sophomore tailback Darnell Williams, who averages nearly 77 yards per game, and has accounted for 254 all-purpose yards, including 80 yards on kickoff returns.

Junior Nick Warren has 100 yards with a score, while junior Jake Kelley has run for 59 yards and two touchdowns.

Junior Forest Fajardo is the top receiver with 111 yards and six receptions with a touchdown, and senior Max Weisman has four catches for 63 yards and two touchdowns. 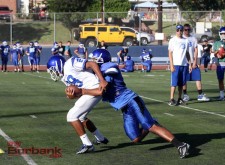 Burbank’s hard-hitting defense will be critical against Canyon. (Photo by Ross A. Benson)

Canyon junior quarterback Miles Fallin has found the target on 30 of 70 attempts for 315 yards, while tossing two touchdowns with two picks.

When the Cowboys run the football, junior Henry Arellano should lead the charge after gaining 76 yards with a touchdown, while senior Ricky Aguilera has 44 yards and one score.

The Bulldogs should zero in on junior wide receiver Camden Apsay, who has 78 yards on seven receptions. Junior Riely Ward has snared five passes for 37 yards and senior Dylan Ramirez has 44 yards on four catches with a score.

It’s certainly not going to be easy, but the Bulldogs can prevail if the offense, defense and special team plays at a high level and they keep the turnovers to a minimum.