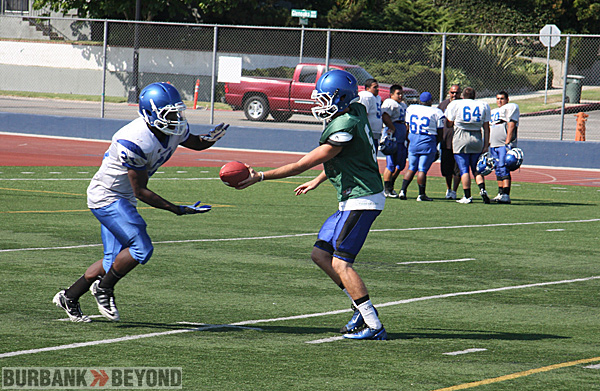 The high school football season is less than three weeks away and the Burbank Bulldogs are chomping at the bit for an exciting year. After successful seasons in 2009 and 2010, the Burbank High football program stumbled last year with a disappointing sixth place finish in the Pacific League. With the regular season opener against Chatsworth looming ahead, the Bulldogs are approaching the year with a new attitude and a focused “team” demeanor.

“I think we underachieved. We definitely had more potential,” Burbank Coach Hector Valencia said. “But we like what we see with this team.”

In Valencia’s first two years at the helm, the Bulldogs went 16-7 with back to back CIF playoff appearances including a league title in 2009. But last season went astray for BHS as they struggled to a 4-6 overall record and 3-4 in league.

Wipe the slate clean. Focusing on team chemistry and camaraderie, Burbank is determined to re-assert themselves as a program to be reckoned with. Fourteen lettermen return including seven starters. The junior varsity (9-1) and freshman (10-0) teams both won league titles last season.

“We have a good group. They mesh together real well,” said Valencia, who hails from the Burbank class of 1993. “This team seems to be more of a family. That’s one thing that is very important and something we really wanted to focus on this year. They really work hard together and they care for each other.”

Relying on their motto “Do it right; anyone, anytime, anywhere,” to help create team unity while representing the program with pride, Burbank is looking to restore some of the luster that was lost during the 2011 campaign. Valencia brought back the program’s proud tradition in his first season in 2009 and there is no reason to think that he can’t do the same this year.

“We are holding the kids accountable for our expectations of them,” Valencia explained. “If we live up to those expectations, we will be successful and have a solid team.

“They pride themselves on not doing the wrong thing. There is no light switch. We just don’t stop acting properly because no one is looking. On-campus, off-campus, practice or games. Do what is appropriate. Do the right thing. We are teaching life lessons through football.”

The strength for the Bulldogs will be their running attack featuring three talented backs who each will contribute significantly in Burbank’s fast-paced offense.

Senior Teddy Arlington returns after rushing for 223 yards last season. Arlington is a three-year letterman with great hands and a strong running game.

“He’s experienced and knows the system,” Valencia said of his five-foot-eight, 175-pound dynamo. “He should have a great season.”

Junior Joseph Pendleton will supply the power and strength at fullback. He rushed for nearly 1,500 yards on the JV team. Sophomore James Williams brings speed and elusiveness. Williams ran for almost 2,000 yards for the freshman team including an astonishing 36 touchdowns.

Senior Zak Tomlinson takes over at quarterback. He isn’t your prototypical six-foot-three QB but rather a leader in the huddle who is hungry and knows the Bulldog offense with great knowledge and understanding. Center Jacob Jimenez brings much needed experience to the offensive line while Francis Nicks will lead the receiving core.

The defense will be anchored by senior nose tackle, Steven Kim. He was an all-league selection last year. Joining him on the defensive line will be stalwarts Kyle Hunter and Jesse Acebal. Safety Joe Argenziano and linebackers Damien Lopez and Aaron Jimenez add toughness and physicality to a Bulldog defense that looks to be aggressive and relentless.

Burbank is in the midst of “hell week” practicing twice a day as they prepare for non-league games against Chatsworth, West Ranch and Inglewood. Pacific League action begins on September 20 against Hoover.

The Bulldogs have the honor of playing the first game at the renovated Memorial Field. But for now it’s all about gearing up for Chatsworth to kick off the season.

“Chatsworth has good size,” said Valencia of the contest versus the Chancellors on August 23 at JBHS at 7 p.m. “They’ve always been consistently a pretty good program. It’s going to be a good matchup. It will be an exciting year.”