It took eight plays from scrimmage for the Burbank High football team to score three touchdowns.

The lead was 28 points heading into the second quarter as the Bulldogs capped the night with a record-scoring performance en route to a 77-16 Pacific League victory over Hoover on Thursday at Memorial Field.

Senior quarterback Guy Gibbs connected on 19 of 22 passes and finished with 386 yards.

“I want to thank my linemen,” said Gibbs, who had four first-half touchdown passes. “They give me the time to throw. We executed really well in the first half.”

Gibbs said despite the lopsided score, Hoover is much better than in year’s past. “They did improve a lot. They came out and played.” 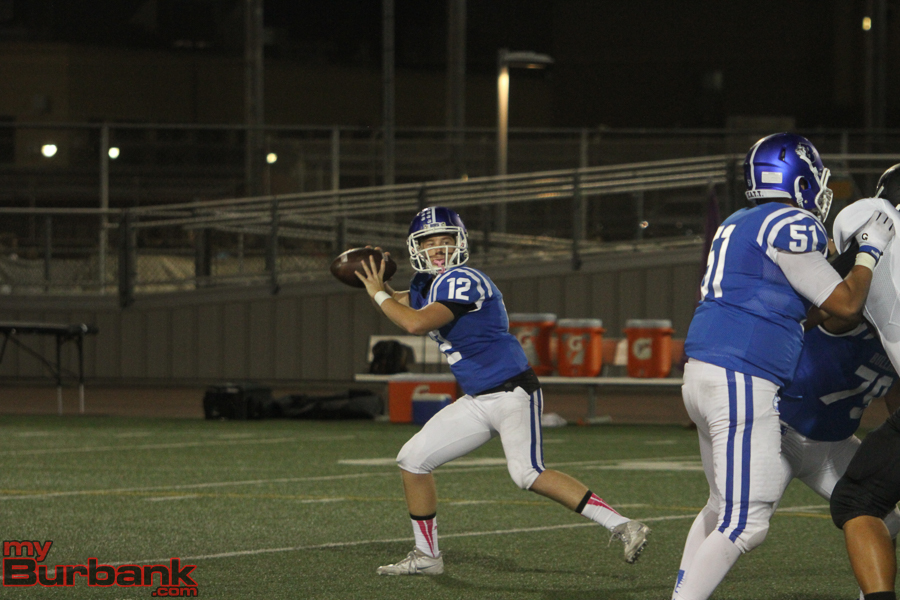 A running clock was initiated early in the third quarter.

“We wanted to get after it,” Burbank coach Richard Broussard said. “We wanted to play with effort. We executed what we do in practice. I think we should always score when we do that [execute].”

The running clock should have begun at the start of the third as the Bulldogs were ahead 56-13.

It took three plays and 52 yards for Burbank to lead 7-0 when junior running back Darnell Williams (40 yards on four carries) found the end zone on a four-yard run and 11:47 left. 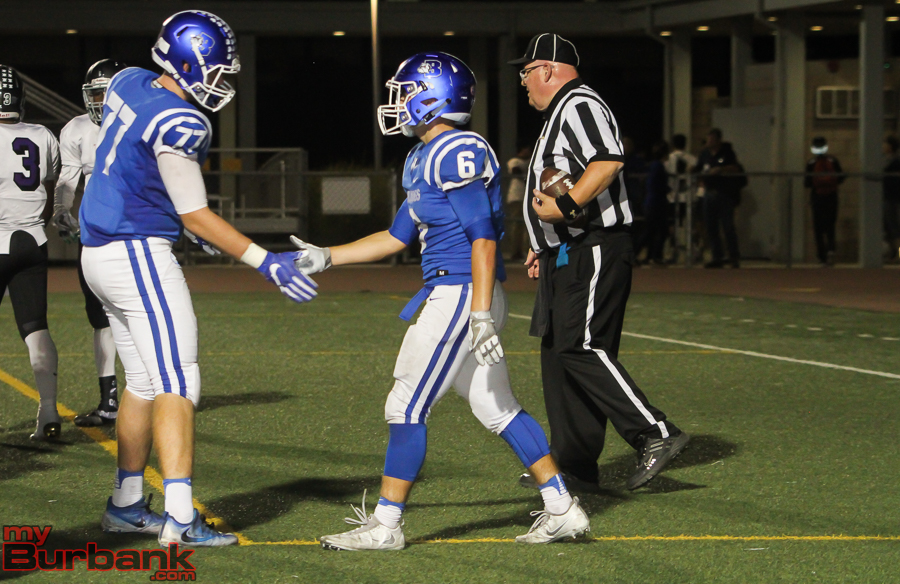 With 1:40 remaining in the first quarter, the Bulldogs were ahead 28-7 when Gibbs located Fajardo with a 29-yard missile. 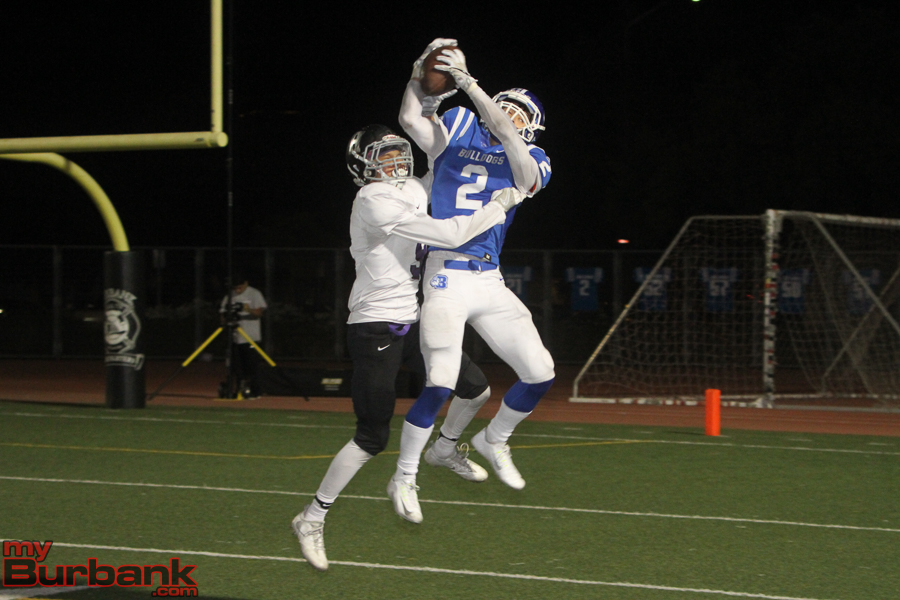 Burbank’s lead was extended to 35-7 with 19.8 seconds left in the opening period when senior defensive lineman Mathew Villagran blocked a punt which senior linebacker Jake Kelley recovered in the end zone.

It ballooned to 42-7 when senior running back Quinton Smith fumbled at the Hoover 31-yard line which Villagran pounced on.

Four plays later, senior running back Nick Warren (29 yards on eight rushes) ran it in from three yards out as 9:29 remained in the second quarter.

Burbank’s lead swelled to 42 points when Gibbs drilled senior running back Andy Reyes with a 27-yard bullet and 3:53 on the clock.

The Bulldogs took a 56-13 advantage into the locker room after Warren scored on a four-yard burst and 20.6 seconds left. 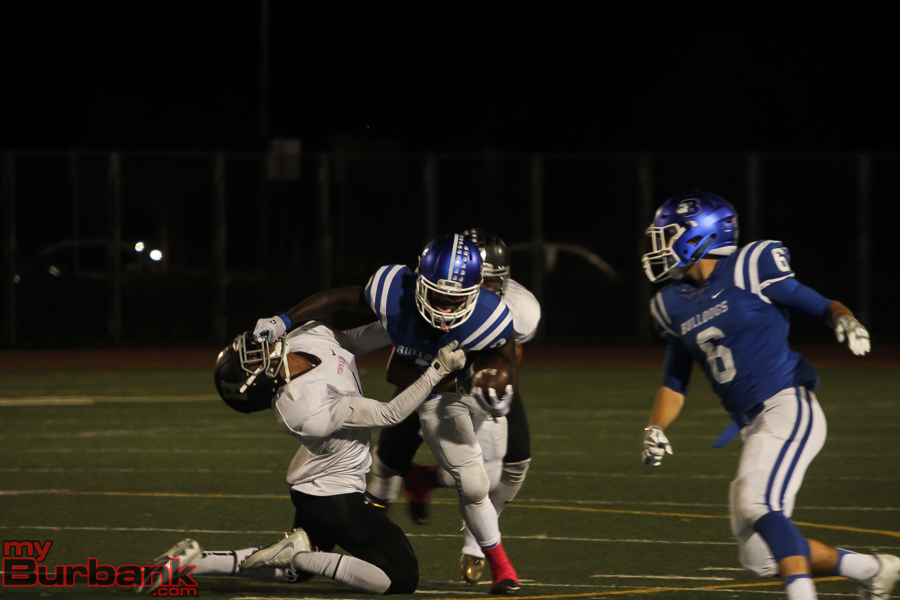 Consecutive interceptions led to touchdowns to begin the second half as Hoover sophomore quarterback Andrew Rangel (six of 18 for 101 yards) was picked off by junior defensive lineman Anthony Lira, who returned the ball 64 yards to make it 63-13 with 11:36 on the clock. 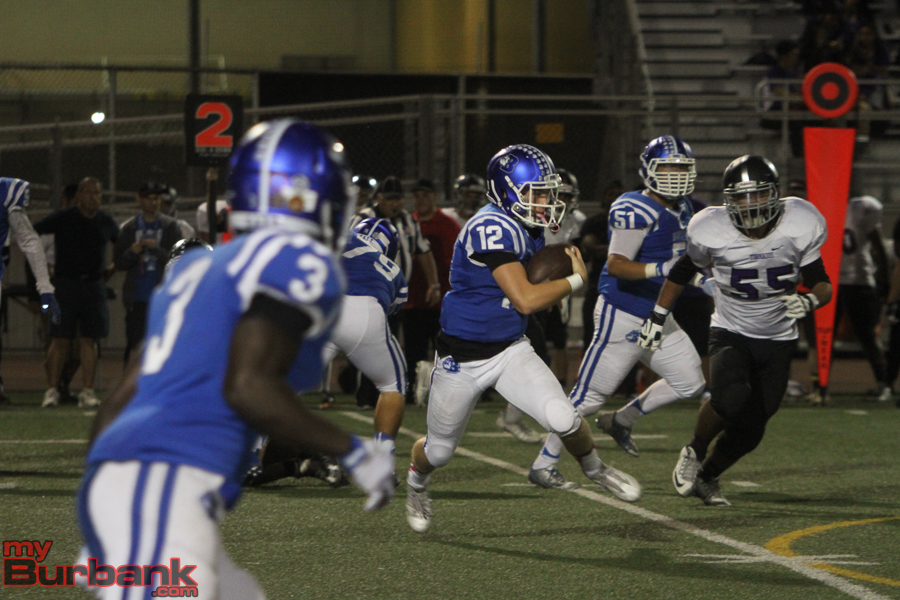 Gibbs can also run with the football. (Photo by © Ross A. Benson)

Senior Johnny Hernandez booted a 32-yard field goal with 7:10 left in the final quarter to make it 77-16.

The Bulldogs will host Arcadia next Thursday in a league match with a 7 p.m. kickoff.