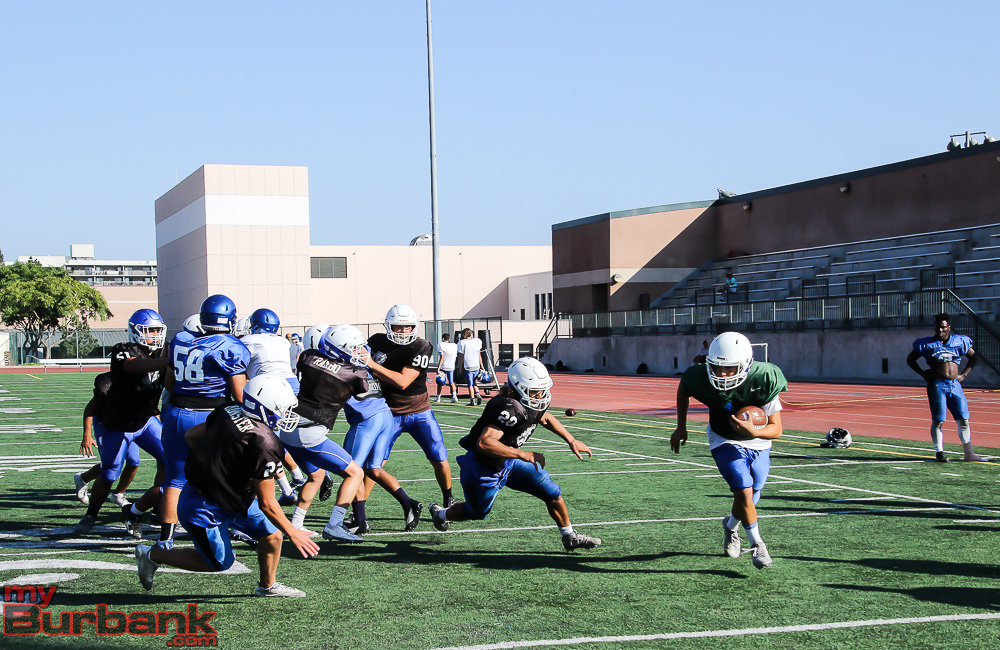 Many faces and names have changed, but the Burbank High football team is looking to put together a season that could be comparable to the one the Bulldogs had a year ago.

The Bulldogs lost many key players to graduation, but still, return a handful that played a key role on last season’s team.

Former Bulldog quarterback and second-year teacher Adam Colman has taken over as head coach from Richard Broussard after winning a league title on the junior varsity level a year ago.

“For me my goals start with winning league.  I know we’ve graduated a lot, but that’s always been a goal for me. It’s a challenge. We’re not the favorites, but anything can happen,” Colman said. “Over the past 10 years I think four or five teams have won league. Last year we were the favorites and it didn’t happen. It doesn’t matter until you put the pads on and you play.

“We’re young, so for me the ultimate goal is to get better every week, as well as better every day. I’m a big believer in John Wooden’s approach. Success is the best of what you are capable of,” Colman said. “ My goal is to not have any regrets and to walk away saying we were the best team we could be and be happy with that.”

Senior Darnell Williams (5-9, 185), the younger brother of Washington State running back James Williams, will get a chance to be Burbank’s go-to back. The last two seasons he shared the bulk of the carries with Nick Warren, who graduated.  Williams had 101 carries for 528 yards and 11 touchdowns last year.

Senior Anthony Lira (6-3, 240) is clearly the leader of the offensive and defensive lines and will play left tackle.

Senior Kaydon Spens (6-2, 190) who had 16 tackles last season will see time as a receiver and as a defensive back.

Junior Matt Porras (5-10, 185) takes over at quarterback. He is the younger brother of Danny Porras, who was a baseball and football star for the Bulldogs.

Porras will have another quality passing target in junior tight end Duncan Smith (6-4, 215). Smith, like Harutyunyan, played on two CIF Southern Section finalist teams as he is also a Burbank basketball player.

Burbank is also expecting big things from senior Blake Quinteros (5-10, 190) who showed promise last season at running back when he was healthy. He will also hope to fill the void of Jake Kelley at linebacker. Kelley led the team with 115 tackles.

Defensively Burbank will have many of the same players on offense. Senior Louie Torres (6-1, 165) is one player that figures to play a key role in the secondary. Christian Fajardo (5-8, 180), younger brother of last season two-way star Forrest Fajardo,  is another who could see significant time in the secondary.

Colman said sophomore Ali Maaz (5-7, 150) has a nose for the ball and will be looked upon to take a role amongst the linebackers.

Senior Andrew Rovira (5-10) returns as the kicker and will add punting duties.