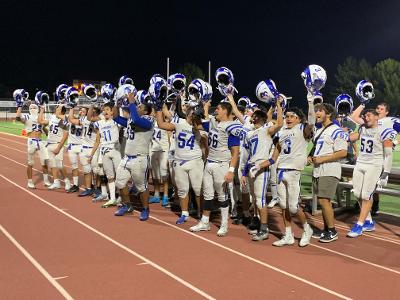 No school wants to lose for homecoming, especially when it is the first time it is hosting a homecoming game in school history.
Castaic High must have thought Burbank High was the perfect opponent, as the Bulldogs have struggled over the years against other Santa Clarita Valley foes.
But Friday night the Bulldogs overcame a slow start and rallied to defeat the host Coyotes 36-20 at Valencia High.
“I remember the Foothill League days. I tried to get it across to the kids you guys need to understand how the Foothill League perceives you and that it is not a coincidence that we are their homecoming,” Burbank coach Adam Colman said.  “They were like it does seem early for homecoming.”
Colman said he told his players, “Do you think that is an accident?”

Burbank (2-1) overcame a 14-0 first-quarter deficit to bounce back.
Zakk Estrada scored on a 1-yard run with 1:07 left in quarter to make it 14-7 after a successful extra point by Chris Aguirre.
But less than a minute later, Burbank gave up another touchdown as Castaic’s Gage Gibson scored on a 55-yard reception from quarterback Domonic Espinoza.
But that was the last time Castaic (0-3) would see the end zone, as Burbank made adjustments that worked.

“I don’t want to become a good second-half team. It is good to see that with all the stuff we worked on this summer, that they are able to bounce back,” Colman said.  “It is all the stuff during the offseason to keep that mentality to not get frustrated and make adjustments and finish.”
Estrada scored on a 3-yard run with 7:13 left in the third quarter to make it 20-14.
Jacob Mendieta scored on a 38-yard touchdown run with 11:47 to play. Estrada, who was the holder on the extra point didn’t get the snap down in time and was forced to run with it himself. But he pushed his way into the end zone to give the Bulldogs a 22-20 advantage.
Later in the quarter Estrada intercepted a pass by Castaic backup quarterback Lucas Milan.
On the ensuing drive, he took a screen pass Burbank quarterback Dylan Robinson and went 54 yards for the touchdown to make it 29-20 with 2:55 to play.
Burbank then recovered the onside kick and added some insurance as Robinson and 6-foot-5 receiver Ben Forster hooked up on a 34-yard touchdown with 1:25 to play.
“I’m very proud of what we did when we came out in the second half,” Robinson said.
Robinson completed four of eight passes for 161 yards and two touchdowns.
Burbank will host Brentwood School next Friday at Memorial Field.