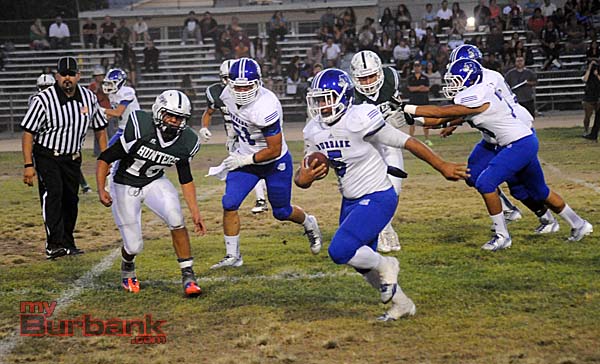 How dominant were the Burbank Bulldogs on Friday night at Canoga Park? Just plain DOMINANT!

Burbank thrashed Canoga Park, 65-7, scoring on nine of 10 offensive possessions with a lone punt to begin the second half the only time the Bulldogs didn’t manufacture points. It was a slight hiccup amidst an avalanche of offensive production and domination.

The 65 points were the second most in school history. A missed PAT in the third quarter prevented Burbank from tying the school-record of 66 points accomplished on October 2, 2005 vs. Golden Valley.

“We were steady. We focused on ourselves and playing our style of football. We wanted to make sure we could run the ball again,” Burbank coach Hector Valencia said.  “I was happy with our defense. They did an awesome job of stopping them throughout the game and giving us opportunities to play our game.” 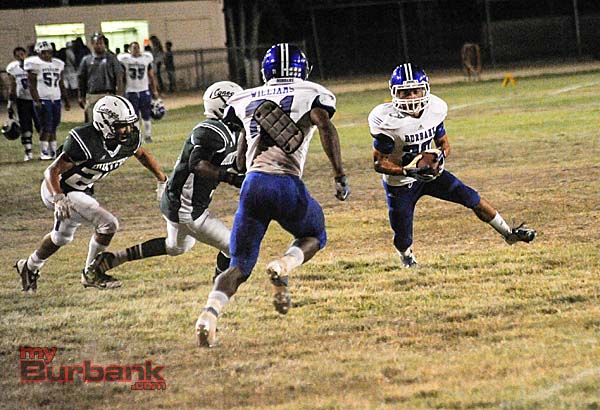 “We did good overall as a team,” Toledo said. “I wouldn’t be able to do any of that without my blockers. So I am very fortunate for that.” 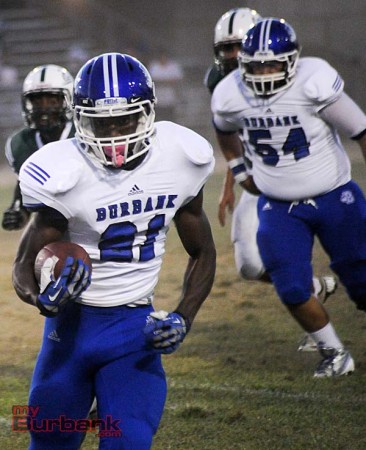 Junior thoroughbred James Williams was corralled for the majority of the game until he broke free on a 67-yard punt return for a touchdown that gave BHS a 58-7 lead. Williams garnered 43 yards on eight carries and two touchdowns (six and nine yards).

Senior Jonathan Afzali put the icing on the cake with an 18-yard touchdown gallop late in the fourth quarter to make it 65-7.

Ryan Meredith, Burbank’s junior quarterback, ran an efficient offense that scored at will throughout the game. Meredith completed 12 of 18 passes for 134 yards. Burroughs-transfer Oharjee Brown was Meredith’s favorite target as he caught four passes for 75 yards.

Burbank scored its first touchdown two plays into the game and never let up. Toledo found the end zone just two minutes into the contest and the rout was on. The Bulldogs led 14-0 after one quarter, 31-7 at the half and 51-7 after three quarters.

While the offense tore up the dusty remnants of Canoga Park’s field, the Bulldogs defense played a much more intense second half after going through the motions in the first half. Fortunately, the Hunters couldn’t find the end zone until mid-way through the second quarter when they cut the Bulldogs’ lead to 21-7. 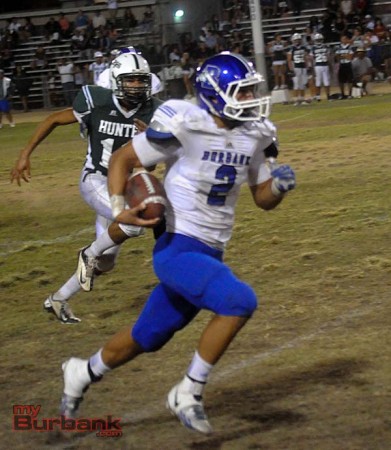 A stern halftime talk by Burbank’s defensive coordinator fired up the troops to not play down to the competition but rather impose their will. The Bulldogs responded to the challenge with a vice-grip type of defense forcing Canoga Park into multiple turnovers and negative yardage.

“We got chewed out at halftime but we came out with a better second half. We played a lot stronger,” senior Sebby Santoro said.

Burbank (2-0) faces a much tougher opponent next Friday night at 7 p.m. when Inglewood comes to town. The Sentinels claimed a 21-14 overtime victory last season against the Bulldogs.

“We need to condition and keep to our assignments and we will be good,” Santoro said.

“We are still not perfect. We need to clean it up,” Valencia added. “Next week we have a very good opponent with Inglewood. They look much better than last year.”

To purchase any of the following photos, please click on this link to SmugMug-

Burbank Baseball Player to Appear on "Minute to Win It"
Burbank Succumbs to Canyon in 35-21 Loss
Burbank Football Cruises to 63-7 Win Over Glendale
Burbank Girls Soccer Prevails Over Burroughs, 2-1