A longtime starter and a key reserve were at the heart of Burbank High’s 59-43 victory over visiting Muir in a Pacific League girls’ basketball game on Friday night.

Senior center Sofia Aslanyan has been a three-year standout for the Bulldogs and was the offensive catalyst with a game-best 21 points, while sophomore small forward Jayla Flowers added five points, but more importantly grabbed key rebounds, handed out numerous assists and was a defensive sparkplug.

Burbank, which made 23 of 75 shot attempts for 30.6 percent and pulled down 64 rebounds, took control early and was ahead 11-8 after eight minutes and bulled in front 26-16 at the intermission.

“With Jayla we’re trying to find what’s her best role,” Burbank co-coach Jett Del Mundo said. “She adds so much more when she comes off the bench. She’s able to disrupt the opponent. She can really flourish in that role.” 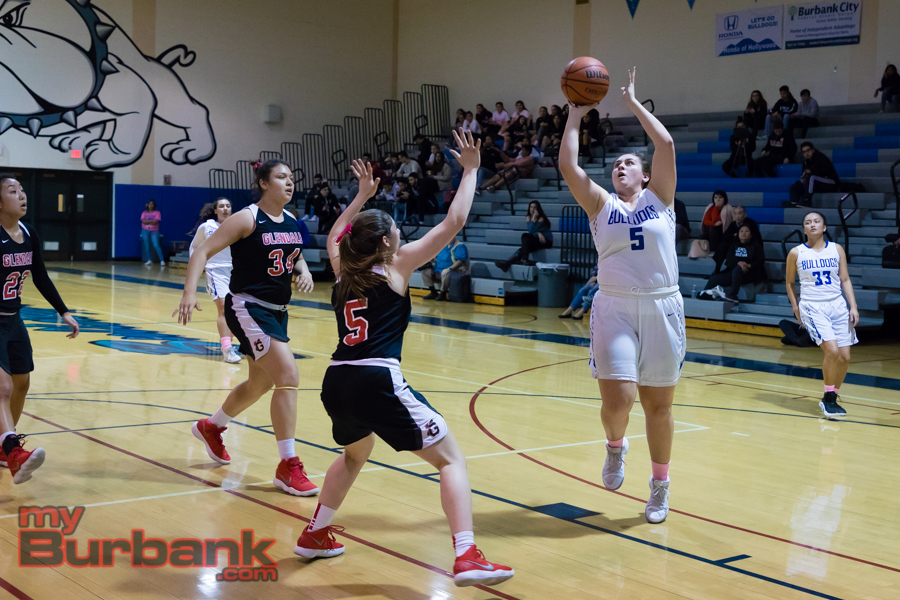 Senior center Sofia Aslanyan, shown in a recent game, dropped in a game-best 21 points against Muir. Photo By: Edward Tovmassian

A bucket by Aslanyan with 1:35 remaining in the second quarter gave the Bulldogs, who canned nine of 18 free throws, a 23-16 edge.

“I hate to say it, but during the season the third quarter has been the worst quarter,” said Del Mundo, who was Pasadena’s coach before coming to Burbank.

A three-pointer by junior shooting guard Brianna Castro (11 points) with 4:26 showing in the third period pushed Burbank’s advantage to 36-22.

Aslanyan failed to score in the first quarter, but then tacked on nine points in the second period.

Senior swingman Osanna Tirityan, who dropped in 14 points, tallied three points in the initial frame as the Bulldogs converted five of 22 shots (22.7 percent) from the field.

“We want to control the rhythm of the game,” Del Mundo said of the contest’s pace. “They have a very nice freshman post player (Olivia Hodges).” 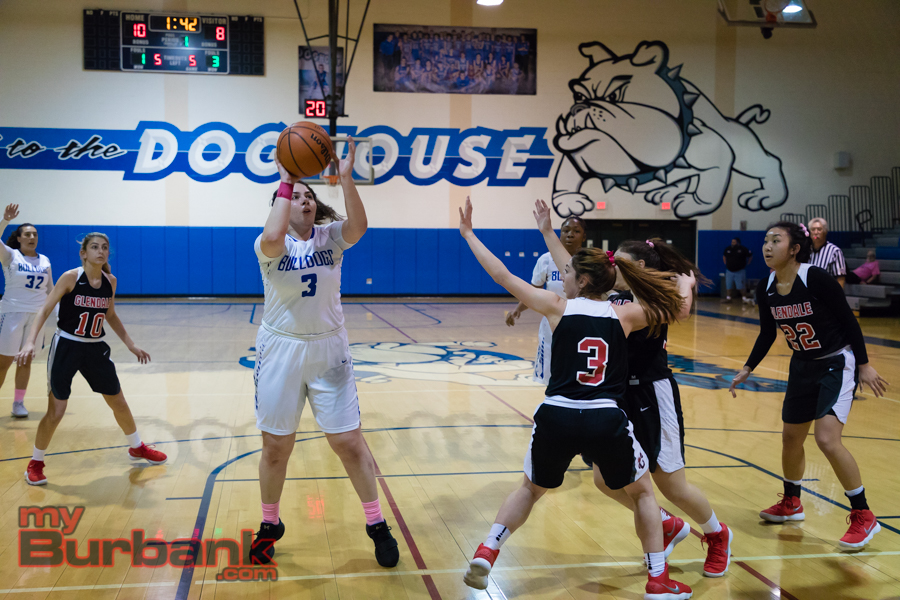 Senior swingman Osanna Tirityan, pictured in a recent match, scored 14 points in a 16-point win over the Mustangs. Photo By: Edward Tovmassian

Muir (4-8 and 0-6 in league) was paced by first-year power forward/center Hodges, who dropped in 18 points, including 12 points in the second half.

The Mustangs, who shot 24 percent (13 of 54) from the field and yanked down 37 caroms, came within seven points at the end of the third quarter and drew within six points, but then saw the Bulldogs pull ahead by 16 points.

Muir, which drilled 16 of 26 from the charity line, rallied in the third quarter, outscoring the Bulldogs 16-13 with Hodges tallying seven points and sophomore guard Jori Haleakala-Denson dropping in six of her 12 points.

Muir converted five of 28 shots (17.8 percent) in the opening half and improved slightly in the second half after hitting eight of 26 (30.7 percent).