Converting free throws should be a relatively easy task given that there isn’t a defender trying to block the shot.

On Friday night, the Burbank High girls’ basketball team marched to the charity stripe 25 times and converted 20 for 80 percent which helped pushed aside host Burroughs, 48-43, in a Pacific League encounter.

The leader of the pack was sophomore shooting guard Osanna Tirityan, who canned 16 of 19 free throws (84.2 percent) and tossed in a game-best 28 points.

“I had a really good night,” Tirityan said. “I’m not always looking to shoot, but if I do and the ball doesn’t go in, I’m ready for the rebound.” 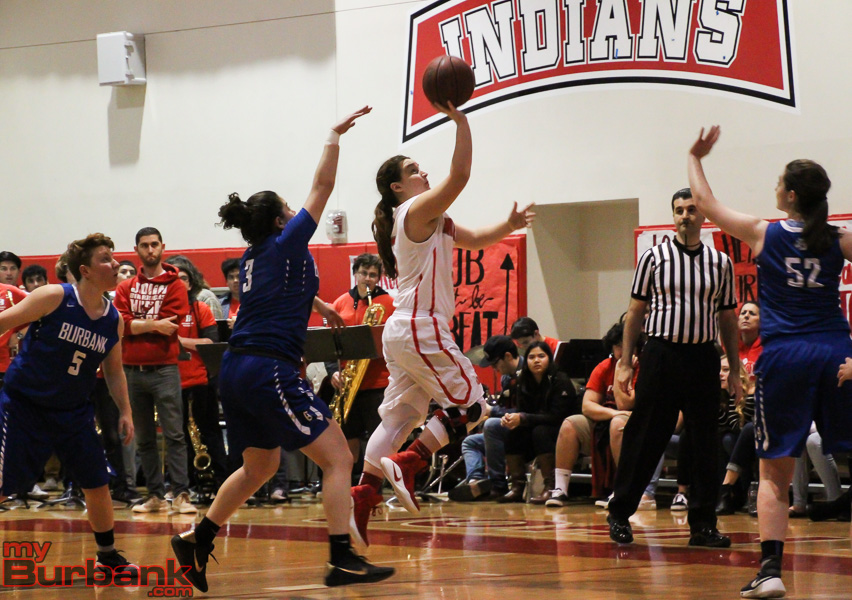 Burbank’s Osanna Tirityan (#3) led all scorers with 28 points. (Photo by © Ross A. Benson)

Burbank found itself ahead 36-31 with 4:45 left in the fourth quarter on a hoop from senior point guard Ani Sarkisyan (six points).

Senior center Emma Kerr was another source of offense adding eight of her 10 points in the second half as Burbank (12-11 and 3-3 in league) trailed 18-14 at the half.

But it was Kerr’s bucket with 3:05 on the clock in the third quarter that shaved the Indians’ lead to 26-24. 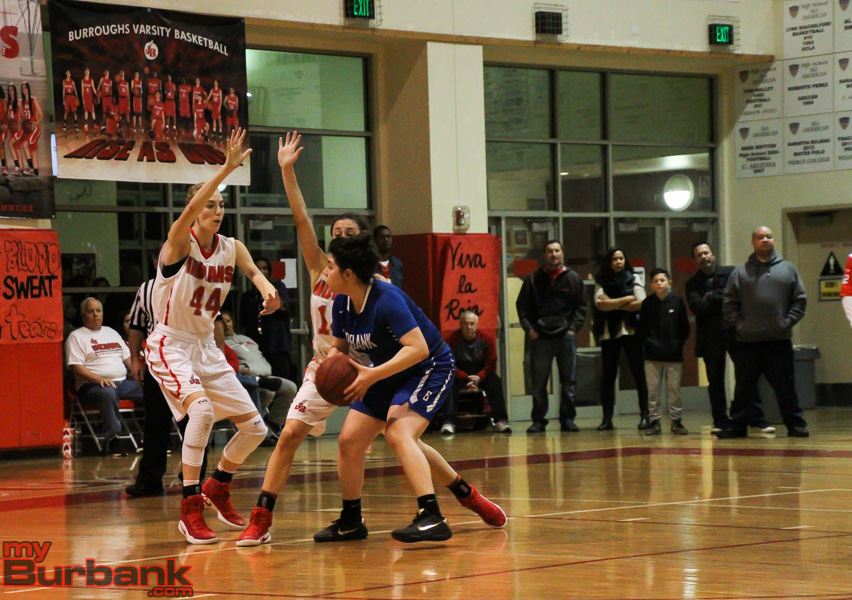 First-year Burbank Coach John Wells said the thinking was that this was a game his club could and should win.

“I didn’t look at us as the underdog,” he said. “We beat Glendale by 20 points. When we’re playing like we’re capable of playing, we’re unstoppable.”

Matters looked to be in Burroughs’ favor with 5:40 left in the third period on a hoop from senior shooting guard Kamryn Cardenaz (team-best 18 points) that gave the hosts a 24-17 edge.

Still the stubborn Bulldogs moved in front 30-29 heading into the fourth quarter. 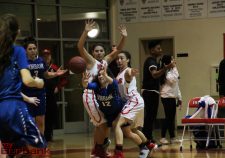 Burbank point guard Ani Sarkisyan, who tallied six points, tries to pass the ball in a game against Burroughs. (Photo by Ross A. Benson)

“I know that it’s a rivalry game, but we try to look at this as just another game,” Wells said.

Senior forward Jocelyn Rieken and junior center Marin Grote each contributed nine points for the Indians (12-9 and 4-2 in league).

Longtime Burroughs Coach Vicky Oganyan wasn’t pleased. “We didn’t make any stops when we had to,” she said. “I don’t want to put the blame on the girls. This was on me. I didn’t put them in a position to succeed.”

Neither team was effective in the opening frame, but Burroughs moved ahead 10-8 behind six points from Cardenaz and three from Grote, who added seven rebounds with four blocks.

Tirityan scored all eight points in the initial quarter for Burbank which made two of 11 from the floor. 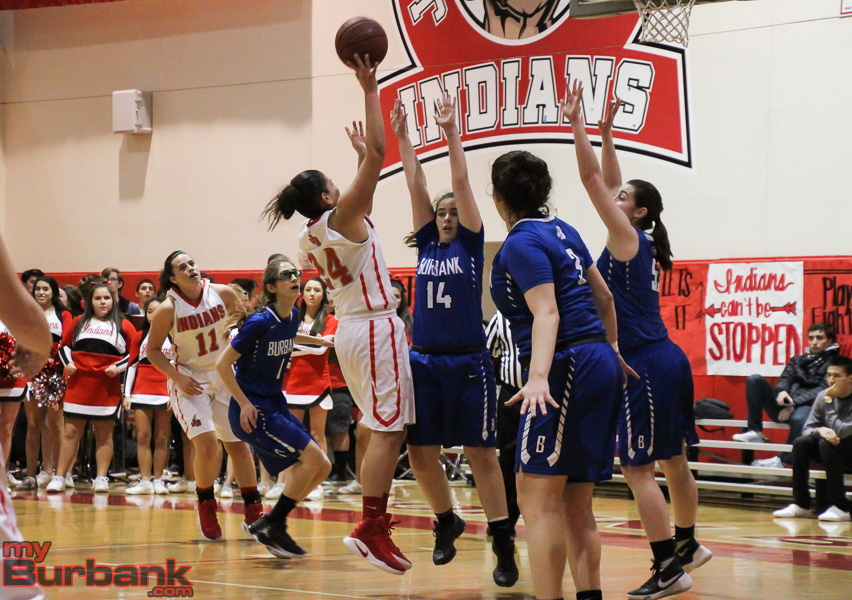 Jocelyn Rieken (#24) goes up for a shot. Rieken scored nine points. (Photo by © Ross A. Benson)

The momentum changed in the third quarter when the Bulldogs drilled eight of nine free throws and four of 11 from the floor, outscoring the Indians 16-11, who saw Grote tally six points.

Kerr dropped in six points in the third quarter and set the tone with her defense. “Emma’s points were huge for us,” Wells said. “That was the key.”

The trend continued in the fourth quarter with Tirityan adding eight points, six via the free-throw line as the Bulldogs made 10 of 14 from the charity stripe.

Cardenaz dropped in eight points in the quarter with six coming at the free-throw line.