A scoreless second quarter was Burbank High’s undoing on Wednesday in a Pacific League girls’ basketball game as host Glendale earned a 38-32 victory.

And still the Bulldogs had a chance to win as they came within 32-29 with 2:05 left in the fourth quarter after senor power forward Christina Mkrtchyan (11 points and eight rebounds) canned a pair of free throws.

Freshman shooting/point guard Osanna Tirityan’s three-pointer with 37.9 on the clock trimmed the lead to 36-32 as the Nitros signaled for a time out.

Tirityan poured in seven points in the final quarter and finished with 12 rebounds.

“You can’t fall that far behind when you’re not playing with a full squad,” said Burbank coach Bruce Breeden, who was missing junior point guard Ani Sarkisyan, whose grandfather recently passed away. 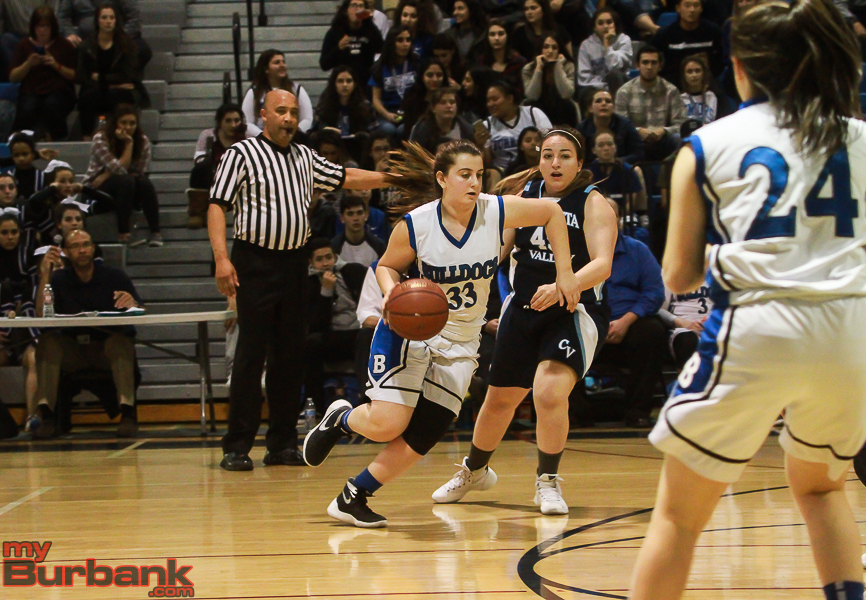 Senior power forward Christina Mkrtchyan, shown here against Crescenta Valley, dropped in 11 points with eight rebounds in a 38-32 loss to Glendale on the road. (Photo by © Ross A. Benson)

The Bulldogs came out with purpose and took a 12-9 advantage in the first quarter.

In the frame, Mkrtchyan knocked in three from three-point range and Tirityan, who drilled two three-pointers, added a bucket and a free throw.

Burbank marched to the charity stripe 13 times and made seven while Glendale sank seven of 11.

The second quarter was a nightmare for the Bulldogs (22.2 percent on 10 of 45), who couldn’t find the range as they failed to make a shot in 11 attempts and missed two free throws.

“They [Glendale] came out ready to play and we didn’t,” Breeden said. “You can’t feel sorry for yourself. Now we have to find a way to make the playoffs. ”

The Bulldogs are in fourth place in the league and have three more games left on their schedule. 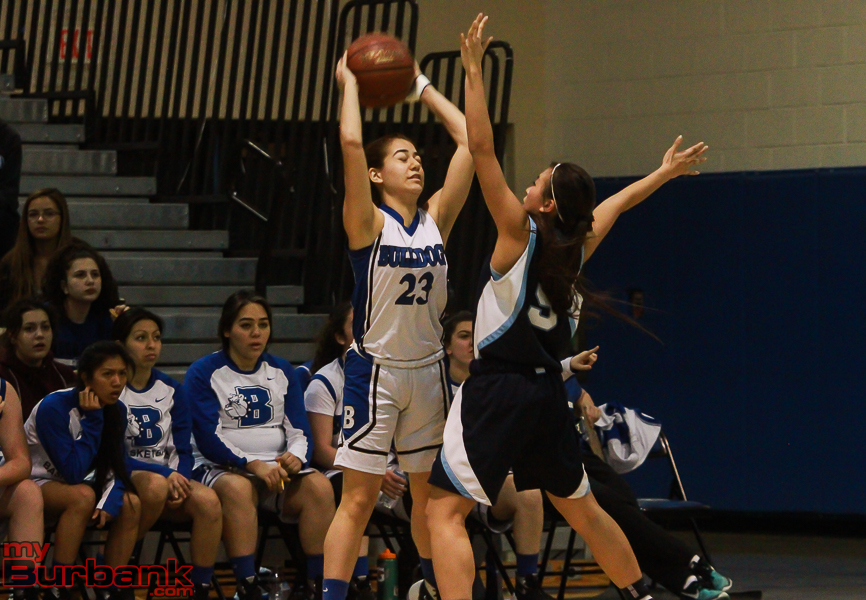 The Nitros (14-11 and 8-3 in league) made three of eight from the field and three of four from the charity line in the second quarter and took a 20-12 lead into half.

Burbank, which hit five from beyond the three-point arc as did Glendale, was outscored 10-9 in the third quarter after drilling three of 10 and two of four free throws.

Burbank junior center Emma Kerr scored all of her five points in the third quarter while Tirityan dropped in a three-pointer and senior point guard Celine Shamalian (three points) added a charity toss.

Glendale hammered four of 13 from the floor in the third quarter with sophomore point/shooting guard Jillian Yanai (seven points) hitting a three-pointer and a hoop.

The Bulldogs will host Pasadena on Friday with a 5:30 p.m. tipoff.