Thursday the Bulldogs faced the Titans again. This team it was in the first round of the CIF Southern Section Division IV playoffs.

Once again the two teams found themselves in a deadlock after 80 minutes. But since one team’s season had to end, extra time was required to break the deadlock. The host Titans finally broke through with a ‘Golden Goal’ in the fourth minute of extra time to pull out a 2-1 win. 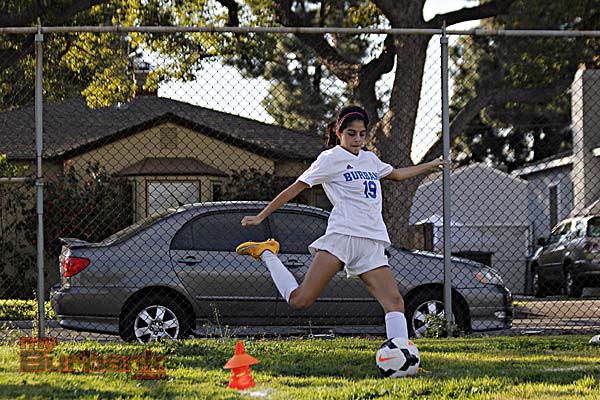 “The girls fought for their lives out here,” Burbank coach Eric Montoya said. “We just wanted to prove we were the Burbank Bulldogs and not the Burbank Underdogs and I think we did that today. We were just unlucky.”

San Marino, the fourth seeded team in the tournament, won the game in overtime as Christina Chang was able to slip the ball past Burbank goalie Nicole Winters into the post.

Much of the match was played in the middle of the field as both defenses were generally strong.

San Marino (15-1-3) surprisingly got on the board in just the fourth minute as Chang took a right-footed shot that got past Winters, who attempted to punch the ball out with her fists.

“The first goal they scored was just a defensive breakdown,” Montoya said. “Nicole did a great job in goal for us today. She saved us big time. That one shot, it just took a bad bounce.”

While San Marino looked stronger early on, Burbank (12-7-1) began to take more control in the middle of the first half thanks to the play of freshmen Ryan Verhoeven and Adrianne Sarukhanyan.

The Bulldogs got one back in the 33rd minute. Katherine Pimentel started the play with a pass to the edge of the box to Kira Bochard, who held off a defender and waited to put a short through ball to Verhoeven, who promptly placed the ball into the left corner of the San Marino goal.

Both teams had opportunities in the second half, but were unable to finish.

Bochard nearly got around San Marino goalie Marlena Martinez on a 63rd minute opportunity. She nearly scored in the final moments of regular time only to be denied by a splendid foot save from Martinez.

Burbank finished tied for second in the Pacific League with an 11-3 mark. With Pimentel being the only senior, Montoya likes the future of his team.

“We’re going to build on this definitely,” he said. “We’re very young. Ryan and Adrianne in the midfield are both freshmen. All I can ask for is that the girls leave everything out there on the field and they did that today.”