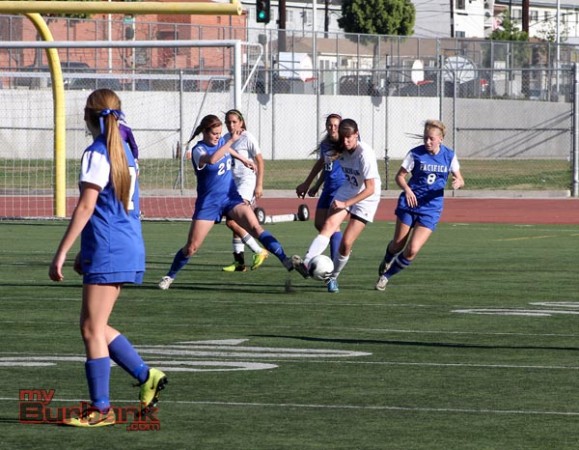 Burbank’s season ended despite a great finish in league (Photo by Ross A. Benson)

Senior midfielder Maddie Shine had the initial goal from 15 feet after a corner kick and six minutes having elapsed, while the second came two minutes later when senior forward Yvonne Valencia’s looping kick over junior goalie Allison Tiegs’ head, who came out of the net, which handed the Mariners a 2-0 triumph. 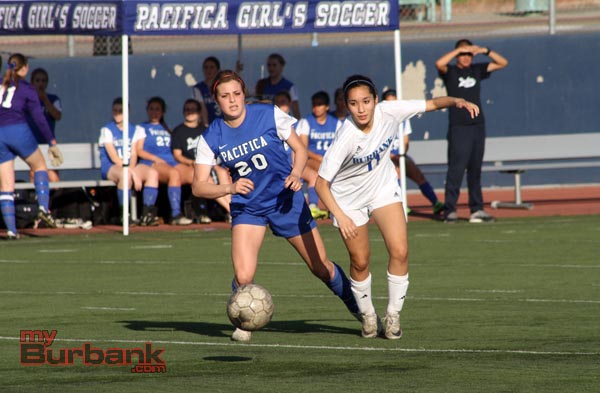 The Bulldogs battled but two early goals ultimately cost them (Photo by Ross A. Benson)

The Bulldogs entered the match brimming with confidence after finishing the Pacific League campaign with five straight wins, but struggled offensively during much of the afternoon getting high-percentage shots against senior goalie Meg Glisson.

“That’s what happens if we give up sloppy goals in the beginning,” Burbank coach Eric Montoya said. “They fell asleep.”

Despite the setback, Montoya said the team will bounce back.

“We’ll learn from this,” he said. “We have nine freshmen on the team, so moving forward we’re going to be better because of what happened.”

The Mariners came out in the first minute of the second half and saw Valencia and sophomore forward Vanessa Ruvalcava get off shots against Tiegs.

Burbank senior defender Michelle Morales had a penalty kick from 25 yards seven minutes later, but her effort sailed too high over the crossbar. 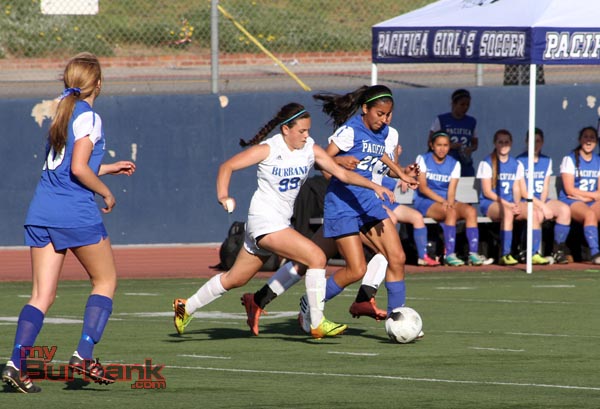 Burbank senior forward Clarissa Guerrero’s 20-yard attempt with 19 minutes left in the second half was picked up by Glisson, before Valencia’s nifty pass to Bistline, whose kick failed to find the back of the net and 10 minutes showing.

“We were peaking and we had a good week of practice,” Montoya said. “We didn’t connect passes today and we just couldn’t win the midfield. We were out of sync all day.”

Four minutes into the affair Pacifica senior defender Darby Scott got off a shot that Tiegs easily handled, but then she allowed two goals.

It took 10 minutes before Burbank (12-5-2 and second in league with a 10-3-1 record) finally had a shot, but freshman forward Kira Bochard’s kick was scooped up by Glisson.

“The first 10 minutes we both had chances,” Pacifica coach Alex Camargo said. “We shut down their top player [Guerrero]. Defensively we were able to contain, and once we had the 2-0 lead we kept four [defenders] back there.” 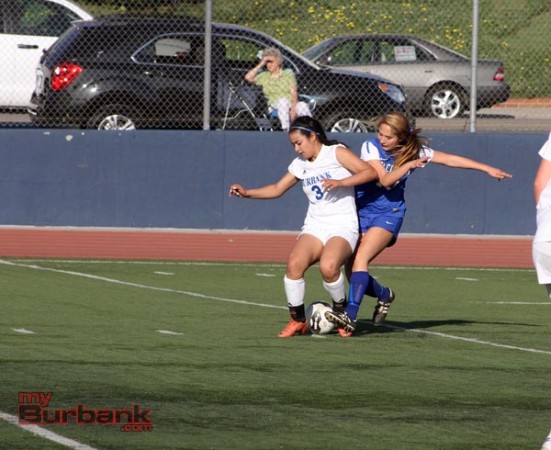 The Bulldogs’ Lauren Brenn competes with a Pacifica player (Photo by Ross A. Benson)

Three minutes later Burbank freshman forward Hailey Heath kicked one from 15 yards, before Chen’s attempt a minute later from the same distance was also off the mark.

“We weren’t there for the ball when we needed to be,” she said. “We wanted to play but we didn’t. We didn’t play to our potential.”