On an unusually warm November afternoon, the Burbank High girls’ tennis season came to an end against visiting Riverside Poly 10-8 in the CIF Southern Section Division II second round on Friday.

But it didn’t come without a fight as the Bulldogs never quit and showed a great deal of determination.

Six of the eight points were collected in singles play with No. 1 Nicole Merrit and No. 2 Kristina Kirakosyan each sweeping their opponents.

“I’m so proud of every single player on this team,” said Merrit, a senior who plans on continuing her tennis career in college. “They gave everything they had in practice and in the matches. I’m going to miss this and all the girls.” 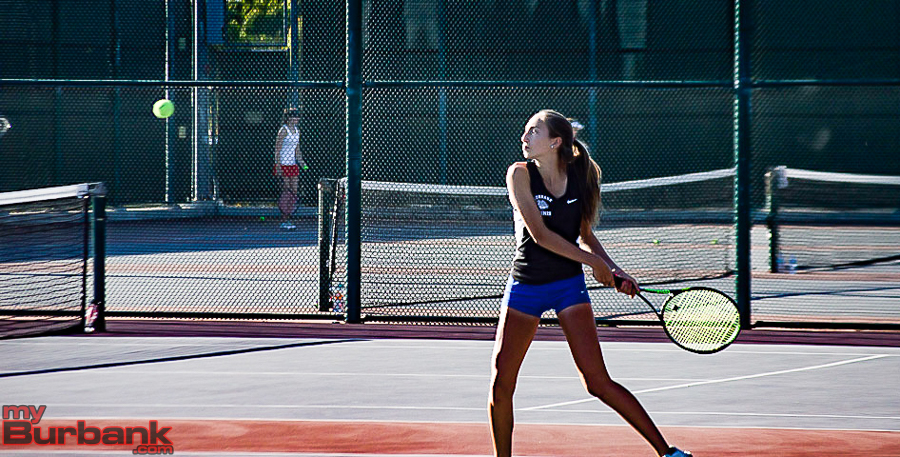 Merrit went on: “I’m just thankful for this year and the four years I was here. It’s something I’ll never forget.”

Merrit was asked if the weather and bright sun were problems. “No, we’re used to this,” she said. “I’m fine. This doesn’t bother us.”

Kirakosyan, a freshman, prevailed in impressive fashion 6-1, 6-2 and 6-3 over those same opponents.

Riverside Poly (21-1) is used to winning having advanced to the CIF championship round the last three campaigns before eventually losing.

The Bulldogs (14-3), who placed second in the Pacific League and took out Ayala in the opening round, garnered two points in doubles play.

The No. 1 Burbank tandem of sophomore Johana Faraj and freshman Elza Vardanyan won 6-1 over No. 2 junior Jasmine Dhalla and senior Laney Baum and 6-3 versus No. 3 freshman Tanner Rowland and senior Maddy Loeb.

The Burbank No. 1 duo lost 5-7 to No. 1 junior Maxelle Bernie and junior Torrey Mateljan.

Burbank’s No. 2 tandem of junior Krystal Hirahira and junior Emilie Siraki were defeated by Bernie/Mateljan 6-2, Dhalla/Baum 6-1 and Rowland and junior Kyley Demshki 6-3.

The Bulldogs’ No. 3 doubles tandem of senior Britni Friedman and freshman Bella Stevens lost 6-0 to Bernie/Mateljan and 6-0 to Dhalla/Baum.