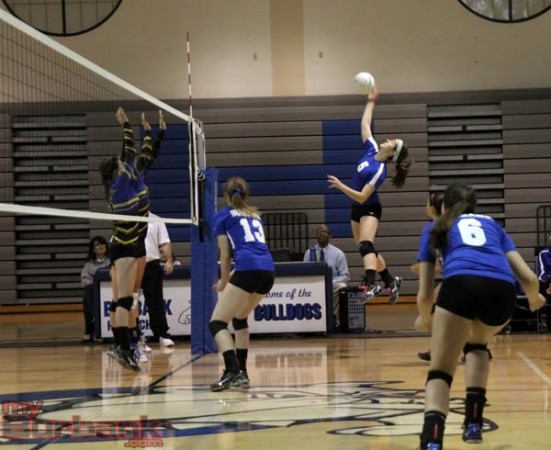 Burbank’s Denise Daniel goes high for a kill in the Bulldog’s win (Photo by Ross A. Benson)

For their effort, Burbank will travel to No. 2 seeded Windward for a quarterfinal showdown on Saturday. 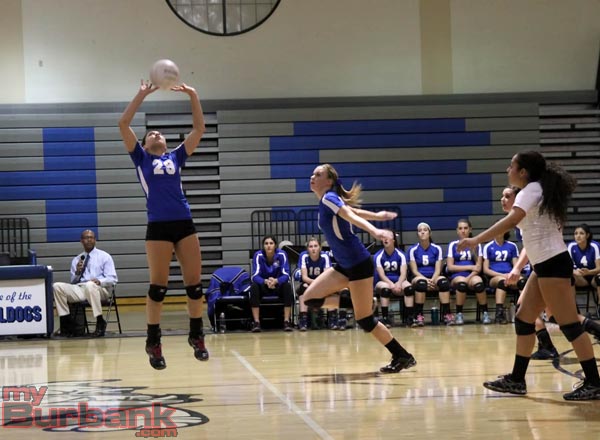 Sara Treadway of Burbank sets up a teammate (Photo by Ross A. Benson)

“I know they’re younger and that we have nine seniors,” Burbank coach Kyle Roach said. “We’re a little more experienced and we have players who have been in the playoffs.”

The clinching game was nothing short of riveting as it was tied a dozen times including 23-23, 24-24 25-25, 26-26 and 27-27 before Burbank scored the last two points when senior middle hitter Allison Tiegs, who led the Bulldogs with 11 kills, rifled a cross-court winner and delivered a service ace.

The final game was knotted at 4-4, but Burbank (24-5 and second in the Pacific League with a 12-2 record) pulled ahead 8-4 on an ace from senior setter Sara Treadway, who finished with 34 assists and nine digs.

The Diamondbacks (23-4 and first in the Mojave River League with a 10-0 mark) crawled within 13-11 on a kill from junior outside hitter Claire Robbins, who paced Serrano with 11 kills, while sophomore outside hitter April Jergensen added 10 kills. 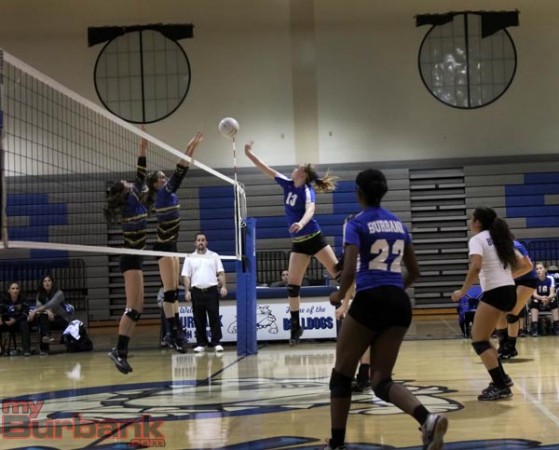 Allison Tiegs applies the kill for the Bulldogs (Photo by Ross A. Benson)

From there, Burbank, which needed four games to defeat Xavier Prep in an opening-round contest, outscored Serrano 4-2 and led 17-13 after senior outside hitter Ashley Edwards nailed a service winner.

The Diamondbacks were not about to wilt as they rallied and evened it at 18-18 when Robbins laid down a kill.

Serrano played without the services of junior outside hitter Sedona Hansen, who severely sprained her ankle in the Diamondbacks’ opening-round victory, and has a volleyball scholarship waiting from the University of Tennessee, and freshman setter Carly Aigner-Swesey.

“I think it would have been 100 percent different if we had them,” Serrano coach Tracy Talbott said. “They’re athletes and they’re competitive. I have a young team and they’re going to have another run.”

The Diamondbacks have only one senior [libero Ofa Moa-Samfong, who had 21 assists], four juniors, four sophomores and three freshman. 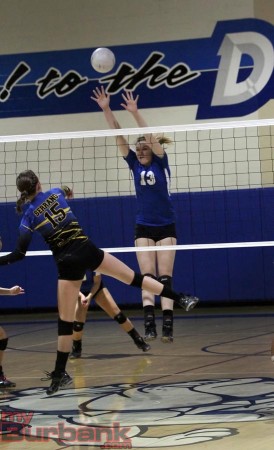 Allison Tiegs goes for the block (Photo by Ross A. Benson)

“They’re a really respectable and good team,” said Daniel, who chipped in with nine kills. “We knew after the first game that wasn’t all they had. That’s not their best. We wanted to keep on our game.”

The Bulldogs kept up the pace and pulled ahead 17-3 on senior outside hitter Rose Cowart’s cross-court winner, and led 19-5 on Cowart’s kill, but Serrano did get within 20-8 before the Bulldogs went on a 5-4 spurt.

“We had to remember that we had to fight back,” said Cowart, who chimed in with 13 digs. “After that first game we expected them to play hard. We wanted to keep earning our points. Mentally we’re very strong.”

The middle game saw Burbank bolt out to a 4-1 advantage on Cowart’s kill, and led 13-8 when Tiegs added a block.