Taking a few weeks off for Christmas vacation was both good and bad for the Burbank High girls’ water polo team.

It was a plus because several players were injured or sick which allowed them to heal and get well.

On the negative side, there could also be rust because of inactivity, but when the Bulldogs faced visiting Glendale on Tuesday afternoon, the team came out and scored five goals in the opening quarter en route to an 11-9 Pacific League win.

“I was nervous just because I knew last year we lost to them by a couple,” Burbank interim coach Zack Card said. “They came out really strong. A lot of our games we came out really beat. Not really focused. They were ball-watching.” 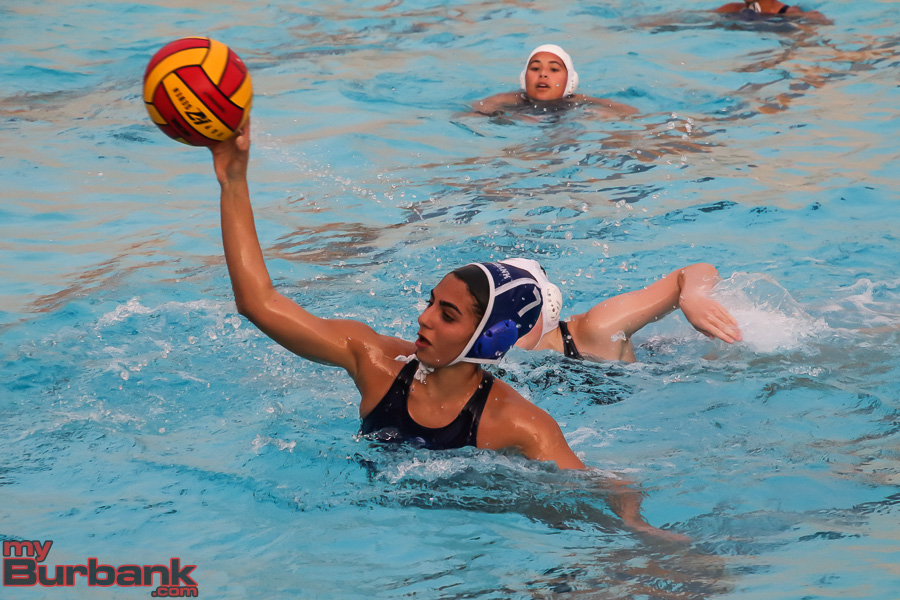 Sera Shahbazian scored three goals for Burbank in an 11-9 win over Glendale. (Photo by Ross A. Benson)

Burbank (4-6 and 1-1 in league) never trailed and led by senior Michelle Morlock’s five goals, including two in the initial frame.

“It’s important that you keep playing your hardest,” Morlock said. “Everyone knew what they were supposed to do and they did it. And that’s important. You need to be where you’re supposed to be and work as hard as everyone else.”

Morlock’s shot from point-blank range with 6:49 left in the first quarter made it 1-0 and Morlock’s close-range bullet with 3:55 left in the same frame extended the advantage to 3-0.

Morlock’s three-footer with 2:14 remaining on the ticker in the second period gave the Bulldogs a 7-3 lead.

“That’s something we’ve been practicing,” Morlock said of the team’s shot selection. “Knowing where to shoot and when to shoot. It’s about everyone driving and moving and getting to where they need to be.”

Morlock’s tally with 2:52 on the clock in the third period saw the Bulldogs, who finished tied for fifth place in league last season and didn’t make the CIF Southern Section playoffs, march ahead 8-5.

Another close-range shot attempt by Morlock with 6:42 left in the contest pushed Burbank’s lead to 10-5.

Sera Shahbazian notched three goals for the Bulldogs, including two in the opening frame that made it 2-0 on a five-footer with 5:22 left and another from five feet with less than second left for a 5-2 margin.

Shahbazian’s six-footer with 5:40 on the ticker in the fourth quarter then pushed Burbank’s lead to 11-5.

Sophia Brice’s goal from eight feet with 59 seconds left in the first frame made it 4-1 and Brice’s tally on a six-foot loft with 2:13 remaining handed the Bulldogs a 9-5 edge.

Patil Minassian’s eight-footer with 5:48 left in the second period catapulted the Bulldogs in front 6-3.

Senior Emma Mueller finished with five goals for the Nitros (3-6 and 1-2 in league) and had three consecutive scores in the fourth quarter.

“In terms of development, I feel like our six on fives are definitely getting better,” Glendale coach Jazzmyne Urquiza said. “What we tend to do as a team is that we’re a second-half team. We do not play well in the first half and then we come back in the second half and sometimes it’s just not enough.”

Junior Bernica Doronila tacked on two goals for the Nitros and they came with 6:16 left in the second quarter, a five-footer that cut it to 5-3, and a tally with 29 seconds left the fourth quarter that drew Glendale to within 11-9.

Junior Jamie Fritz also chipped in with two goals and were knocked home in the first quarter on a 10-footer with 3:24 left that shaved Burbank’s edge to 3-1 and in the third period on a point-blank shot with 5:27 left as the Nitros came within 7-4.

Burbank’s Suzy Misiryan was the goaltender for three quarters and replaced by Jenny Stepanian in the fourth period.