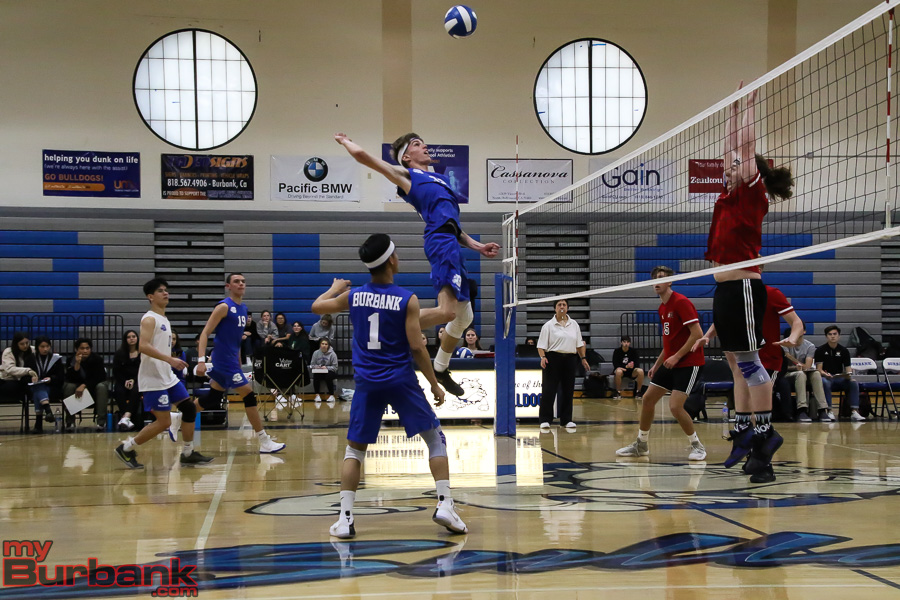 Only two matches have been played and the Burbank High boys’ volleyball team has balanced its books after defeating Hart on Thursday afternoon.

Burbank was swept in its season opener on Tuesday by host Harvard-Westlake, but two of the three sets were close, having been decided by two and four points.

“I think our energy was very good in the first two sets. We were passing well. The hitters were expressing themselves really well,” Burbank coach Karl Rojo said. “I think the setter was being dynamic with where he was going.”

There was a slight dip in the third frame.

“Maybe in the third we let up a little bit,” Rojo noted. “Getting my guys opportunities to figure it out. I’m glad these guys figured it out in the fourth. It was staying level-headed. They stayed tough-minded.”

The host Bulldogs came out in the fourth set and led 7-4 on a kill from senior outside hitter/opposite hitter Chase Marcy (match-best 12 kills) as the Indians called for a time out.

The lead became 9-4 on another spike from Marcy, but Hart evened it at 10-10 on an ace from Darin Dietz, as the Bulldogs requested time.

“In game three we just kinda clicked. I kind of let the game come to them,” Hart coach Loy Mueller said. “In game one and two, we were fighting against each other. I just let them play.”

Mueller is in his first season at Hart.

“I’m happy with what I saw at the end of game two to about halfway through game four,” he said.

When senior setter Brandon Villaflor (41 assists and four digs) hit a tapper, the Bulldogs scurried ahead 17-16.

A kill from Hart’s Ezra Moore evened it at 17-17, but Marcy’s spike forced a stoppage as the Bulldogs charged ahead 20-18.

Burbank vaulted in front 24-21 on consecutive kills from senior middle blocker Kalam Park (five kills) and the set and match was secured on a serving error by Meyers.

The first set saw the Bulldogs (1-1) race ahead 4-0 on a hitting error from Moore. A kill from senior opposite hitter Jack Raytis (eight kills and two blocks) gave the Bulldogs a 7-4 edge.

Burbank’s lead swelled to 8-4 on a block from Villaflor and an ace from Raytis made it a 9-4 as the Indians (0-2) requested time out.

A winner from Raytis pushed it to 18-14 and when Marcy added back-to-back winners, Burbank’s lead swelled to 21-16 as the Indians, who were swept by Alemany in their initial match, asked for a stoppage.

Marcy’s kill saw the Bulldogs surge ahead 23-19, a tapper from Park made it 24-19 and an ace from junior middle blocker Eric Galoustian capped the set.

Villaflor’s service ace made it 11-8 and a tap from Raytis pushed it to 12-8. A hitting error by Meyers made it 14-9 as the Indians asked for time.

Consecutive service aces from junior libero Joe Gomez (match-best 16 digs and two aces) pushed the lead to 18-10, as the visitors asked for a stoppage.

Villaflor’s kill made it 21-13, but when Marcy’s attempt sailed out of bounds, the Indians came within 21-17 as Burbank requested time out.

A combined stuff by senior outside hitter/opposite hitter Ryan Rickey (seven kills and 11 digs) and Villaflor extended the lead to 22-18, and Marcy’s kill saw the Bulldogs dash ahead two games to none.

When Villaflor and senior middle hitter Dawson Koerper combined on a block, the Bulldogs powered in front 15-11.

Hart rallied and outscored Burbank 7-2 and led 18-17 as Rickey hit a ball out of bounds. A kill from Raytis evened it at 18-18, but the Indians moved ahead 21-19 on Rickey’s service error.