DeVirgilis replaced former theater head Brooks Gardner, who retired in June, and “knew Ives’ All in the Timing — six silly, smart, illuminating one-act comedies about relativity, randomness and our place in the space-time continuum — would be the perfect first play to direct, and something he’s wanted to tackle for 20 years since first seeing a production of it while attending Syracuse University.”

The production includes, according to DeVirgilis: “Sure Thing,” which shows how tough it is for two people to make a love connection, as a bell rings whenever one makes a faux-pas; “Words, Words, Words” invokes the infinite monkey theorem – three monkeys left with enough time will eventually write Hamlet; “Universal Language” introduces to Burbank a new way to communicate, bringing all the languages of the world – and two lonely characters – into harmony; “The Philadelphia” follows a character stuck in a state of being that resembles a black hole… but also serves cheese steak; “Variations on the Death of Trotsky” reveals the Russian revolutionary leader on his final day, coping with the time-space continuum and an axe in his head; “Philip Glass Buys a Loaf of Bread” is a 10-minute slice of avant-garde madness, which is what happens whenever the minimalist composer simply visits a bakery.

“This is not your typical high school play, but I’m sure the audience will laugh. But it’s also challenging, and I want them to think,” commented DeVirgilis. “And there at least one time when things on stage are so strange, they might even be a little disturbed. Nothing for parents to be worried about.”

“Just taking a closer look at things we take for granted or looking at them in a different way. What’s better than being surprised at the theatre?”

“This has been a great show to work on because Ted DeVirgilis was open to taking the way the play is written with its rhythms, patterns and repetition, along with its quirks and comedy and relativity,” said Broderick who conceptualized the play’s very abstract sets. “He let us really put it into the scenery, lighting and costumes.”

“There are walls that move after every piece and reform to another completely different setting,” added Broderick. “It’s been a great collaboration between myself as set designer, Derrick Kolus, the lighting designer, and Marissa Maynes, the costume designer, to support Ted and give him a strong pallet to work with on his first show as the new Director of Theater at BHS.”

DeVirgilis, who spent the past 12 years as a teacher at John Muir Middle School, is very excited to share his training and expertise with his talented young actors.

“What I want to do with the students at Burbank High is give them some of those skills they’ll get in college, different acting methods and vocal training,” he explained. “I want to show them that acting is more than just getting up there and getting a quick laugh. That there’s an art to it all.”

“I’ve helped with the program and making sure things behind the scenes are running smoothly so Mr. DeVirgilis can be with the actors,” said Assistant Director and BHS student Naira Demirchian. “I think the play is coming along really well and Mr. D’s doing a great job with them.”

“They’re putting together a really amazing play with a lot of great stories. They’re funny but also very heartwarming. And our sets are incredible! I just hope I helped in any way I can because I know Mr. D wants this play to be fantastic, and I fully believe it will be.”

“I would like to just say this has been an amazing and challenging experience; it’s a difficult play but it has tons of potential,” commented Brandon Kilham, who appears in “Universal Language.” “I am very excited to see how things turn out and very thankful [for] Mr. DeVirgilis’ commitment and hard work.” 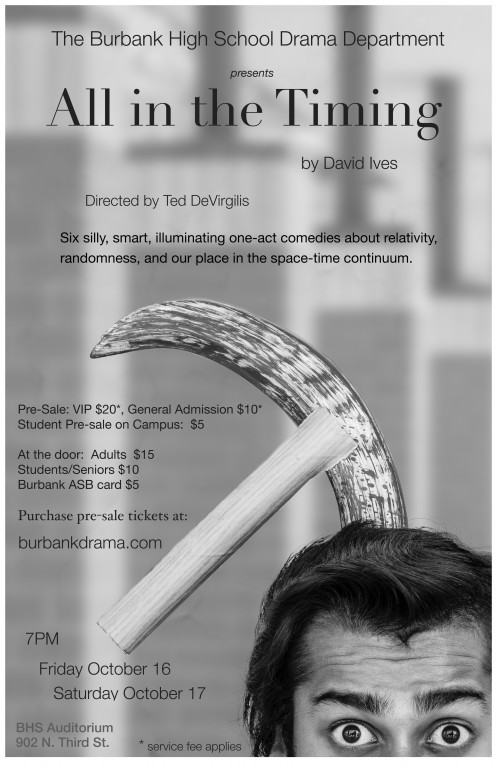