It’s fairly rare when both the Burbank High and Burroughs girls’ tennis teams are ranked in the CIF Southern Section.

On Tuesday, they both were and it showed in a Pacific League match as the visiting Bulldogs and Indians were tied at 9-9 and needed games in order to render a winner.

Burbank (5-1 and 4-1 in league), which is ranked No. 6 in Division II, prevailed 75-68 with enough drama to last a while as No. 3 Siya Joshi, a sophomore, was down 2-5 to senior Savannah Dorris, but then rallied for a 7-5 win that forced the match to be decided by games. 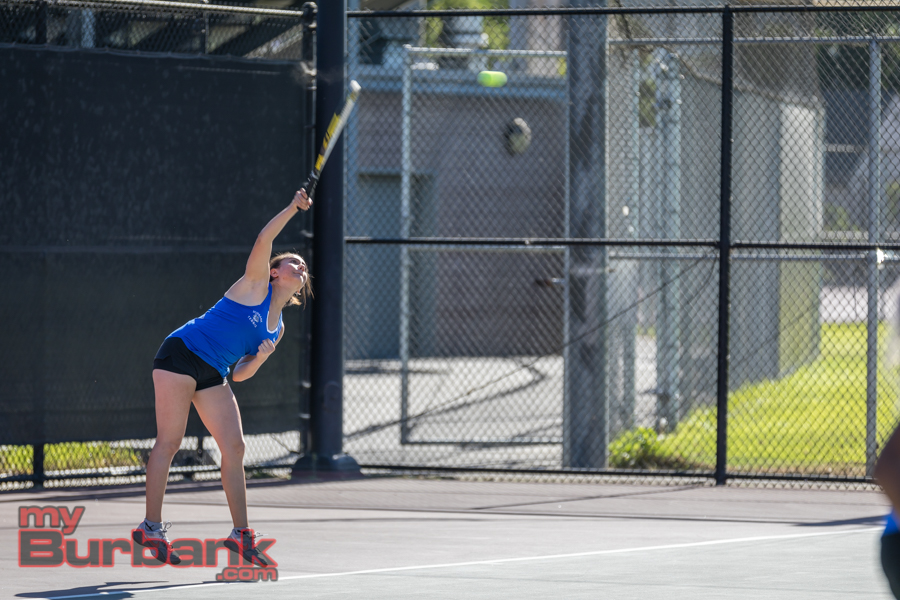 It was so close when Burbank met host Burroughs in Tuesday’s Pacific League tennis match. It was tied at 9-9 and decided by games. Photo By: Edward Tovmassian

Phan went on: “Our doubles are down a little. Our singles carried us. Their doubles carried them.”

The Indians (2-4 and 1-3 in league) are ranked No. 1 in Division III and took seven of nine in doubles play.

Burroughs’ No. 1 doubles tandem of Irish Demesa, a junior and Phuong Nguyen, a senior, went 6-4, 7-5, 6-2, defeating No. 1 Daisy Kim, a senior and Esther Chung, a senior, No. 2 Jinette Faraj, a sophomore and Ellie Sumera, a freshman and No. 3 Lilyan Hawrylo, a freshman and Anneke Pullen, a freshman.

The Indians’ No. 2 doubles squad, Mikalya Hayes, a junior and Suzy Kim, a junior, took two of three including a 6-2 triumph over Kim and Uma Patil, a senior, who substituted for Chung.

Hayes and Kim also prevailed 6-0 over Burbank’s No. 3, but lost 6-2 against Faraj and Sumera.

The Indians’ No. 3 duo of Vicky Shagriyan, a junior and Pranathi Darbhala, a senior, went 6-1 over Kim and Patil and 6-3 over Hawrylo and Pullen, but fell to Faraj and Sumera 6-3.