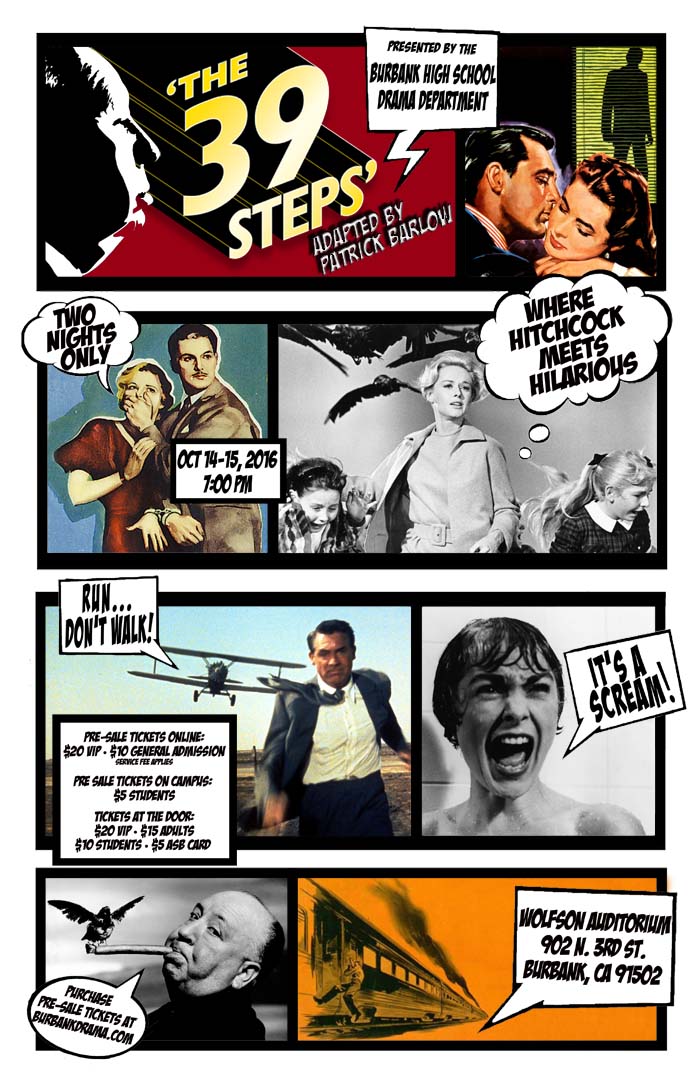 The Burbank High School Drama Department is excited to present its fall play The 39 Steps and very happy to welcome the department’s new Director of Theater, Annie Terry.

Graduating from Northwestern University with a bachelor’s degree in Theater, Terry comes to Burbank High School after spending17 years working in different capacities at Beverly Hills High School – as Theater Operations Specialist, an English teacher, and a drama teacher.

She is also a founding member of The Next Arena (www.thenextarena.com), a Los Angeles based theater company, known mostly for original pieces and works adapted from literature. She is married to her “best friend” and fellow artist, and the two have three children, her “dearest creations,” Zoe, Beau, and Tyo.

“I am thrilled to join a school with such a great reputation in the performing arts and am looking forward to continuing the tradition of excellence,” says Terry. “I hope to bring some new ideas and allow the students to experience an assortment of performance opportunities, including experimental theater and musical theater.”

First on Terry’s docket is this year’s fall play, The 39 Steps, a fast-paced whodunit, which mixes Alfred Hitchcock’s masterpiece with a juicy spy novel – and a dash of Monty Python, for good measure.

The play follows a man who is entirely bored with his life, until he meets an intriguing woman. She tells him she’s a spy, but when he takes her home, she is murdered. Soon, a mysterious organization called “The 39 Steps” is hot on the man’s trail in a nationwide manhunt that climaxes in a death-defying finale.

Set Designer and BHS’ Stagecraft Teacher Karen Broderick once again has designed amazing sets with the help of student technicians. Students are also involved in the show’s choreography, and there will be an additional presentation by a variety of performers from  BHS displaying their special skills, such as acrobatics, gymnastics, juggling and more!

Terry said, “It is my goal to include the students in as many aspects of the creative process as possible, so they might discover a wide variety of roles during the course of production to enhance their understanding of all the ways we make theater come to life.”

For anyone who loves the magic of theater, The 39 Steps is packed with nonstop laughs, zany characters, an onstage plane crash, handcuffs, missing fingers, and some good old-fashioned romance. A riotous blend of virtuoso performances and wildly inventive stagecraft, you will have an unforgettable evening of pure pleasure!

News Press Release - June 24, 2022 0
“Make no mistake, this court is not conservative — it is partisan, with a partisan and socially backward agenda."

Summer Family Fun Ashley Erikson - June 24, 2022 0
This summer, visiting the Petersen Automotive Museum, is a must-do for your bucket list. From the outside the giant red and metal structure looks like something out of a space film, but once inside hundreds of the most unique and rare cars glisten and sparkle covering three floors of space. Their featured exhibit, Bond in Motion, holds the official collection of James Bond vehicles that is now on display through October 23rd.