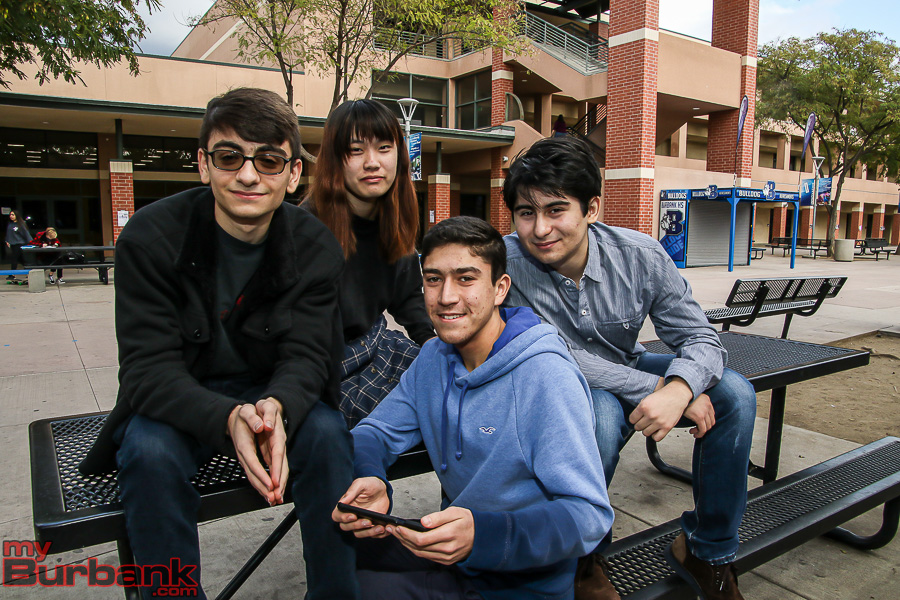 Four Burbank High School students have been celebrated in a nation-wide competition for a Congress-lead computer science app initiative.

The Congressional App Challenge launched in 2013, and stands as one of the most esteemed computer science awards in the country. The competition is run district-by-district throughout the U.S. and encourages both middle school and high school students to create an original app using any topic, platform, or programming language of their choice.

The initial focus that sparked the idea for the app revolved around creating awareness for universal problems, with the final decision being a global warming initiative.

“We wanted to not just create an app that’s interesting for us but something that can actually have an impact on the world, something about major problems,” said club member Armen Arkelyan.

The app starts with a visual of a forest that is dead with no visible vegetation. By entering one’s vehicle model, miles per gallon, and number of miles driven, a carbon footprint is calculated. Over time, reduction of carbon emission leads to a healthier looking forest. A graph will track users’ carbon footprint, and the objective is to get the forest looking as green as possible.

The students’ goal with the app was to shed light on the urgency of climate change and how each individual can change their habits to make a difference.

“It’s about raising awareness to show how much people are actually contributing even though you might not think it’s a lot. It is a lot when you look at the numbers. The main factor was raising awareness,” Arkelyan added. “Even though individually maybe it might not seem like there’s much of a difference, together as a group an impact can be made.”

The students learned of their win through a call from California 28th District Representative Adam Schiff, who expressed his approval of their impressive accomplishment.

“I am incredibly proud of the talented local students who submitted entries in the 2019 Congressional App Challenge. They designed creative solutions to challenges we face every day, while learning how to code and building technical skills for their futures,” Schiff said in a statement.

The Coding Club has gained popularity in recent years at BHS, and is focused on student initiative and self-starting participation. Computer science teacher Brenda Kosbab is in her sixteenth year teaching at Burbank High School and contributes to an advanced and rare program that has enabled students to reach success in their computer technology endeavors.

“The coursework that we have for computer science here is fairly unique. We have three different courses that students can take in computer programming, and a lot of high schools still don’t have any sort of programming courses that they offer,” Kosbab said.

For students thinking of joining the program, Kosbab emphasizes to them what a great opportunity it is for their future.

“What I always say to students is ‘You are setting yourself apart, this is a unique program.’ ”

Club member Haroutyun Joulfayan echoed a similar sentiment and feels that the recognition they’re receiving will motivate other students as well.

“It’s a worthwhile investment of your time. It’s a chance for new opportunities. I think that [the award] will really inspire people to join and better themselves,” Joulfayan explained.

In addition, he hopes the app will have an emotional appeal for people by helping them gain a clearer picture of how we contribute to global warming in our daily lives.

“I think it’ll play on the pathos of people. It helps you to visualize it in a more realistic sense,” Joulfayan said.

Burbank High School Principal Thomas Crowther says he is thankful to have BHS kids going the extra mile to show their passion in their areas of interest.

“It’s nice when you have students who are already taking really rigorous coursework, already spending a portion of their day in AP computer science, doing it as an extracurricular activity, entering an optional contest and winning. That’s pretty cool,” said Crowther.

Beyond computer science awareness, Crowther expressed the award’s representation of the variety of opportunities present within the Burbank public educational community.

“I just hope it signals to the community what a great experience the public high schools in Burbank are. There is a pathway for everybody, whether it’s athletics, activities, or placement courses. There really is something for everybody here.”