Burbank football has found its leading man. After serving as an assistant coach for the Bulldogs since 2008, Richard Broussard has been promoted to head coach the school announced yesterday. Broussard replaces Hector Valencia who resigned in late February to spend more time with his family.

“It brought a big smile on my face. I’m very excited and a little relieved,” Broussard said. “I’ve worked hard for this. We’ve been headed in the right direction and now I can continue what we’ve been working on during the off-season.” 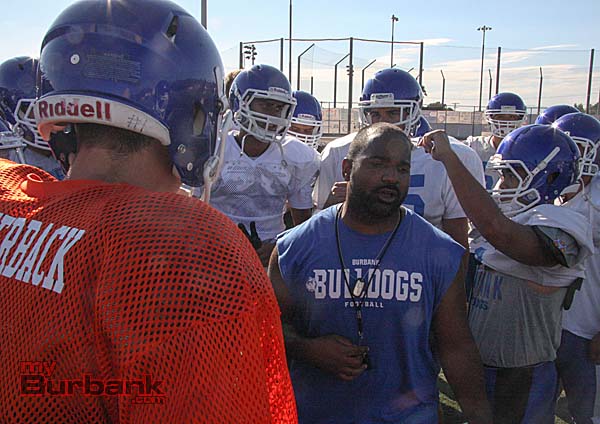 Broussard, 33, was the team’s offensive coordinator the last few years. The passionate, dynamic and vocal leader of the coaching staff inherits a program that won 30 games as a whole in 2013 including the varsity team which won a school-record 10 games this past season.

The Bulldogs advanced to the CIF Southeast Division semifinals where they lost to the eventual CIF champions, La Serna High School. It was the farthest that BHS had gone in the school’s 100-year plus history.

“The excitement level is about the process getting there. One step at a time,” Broussard said. “But our players want that ring. If they want it, then I want it. We got a taste of what it felt to almost be there.”

The Bulldogs return running back James Williams and quarterback Ryan Meredith. They were a part of the high-tempo Burbank offense that averaged 43.8 ppg in 2013.

Broussard has been overseeing the program during the winter months. Burbank has been focusing on weightlifting and agility in the off-season and Broussard has been very impressed with the team’s commitment and development so far. 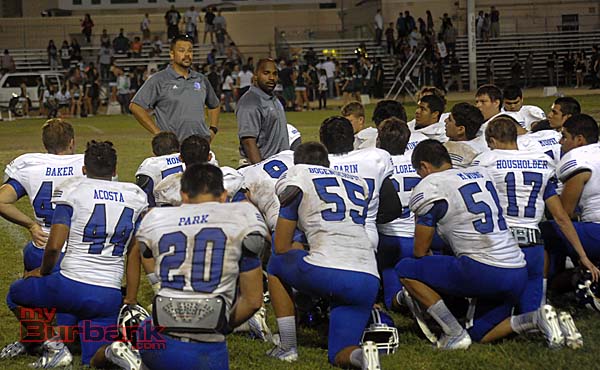 Richard Broussard will continue to have Hector Valencia (left) by his side for the upcoming 2014 season (Photo by Ross A. Benson)

Now that the baton has been passed from Valencia to Broussard, it should be a seamless transition for the players and coaches. Broussard said he doesn’t expect any major changes on the coaching staff emphasizing continuity and consistency for everyone involved.

Having been solely focused on the offense in year’s past, Broussard will continue to call plays but also be hands on with the defense and special teams. As the head coach now, everything falls under his umbrella.

“I love football. This game has given so much to me,” he said. “I want to give back. I want to mold these kids into good people and coach exciting football.”

Valencia will remain on staff as an assistant. The role reversal is fine with both men and Broussard is just as happy having Valencia stay by his side as if nothing ever happened.

“I owe him a lot,” Broussard said. “He will always be a part of Burbank football. He’s the reason where I am today.”