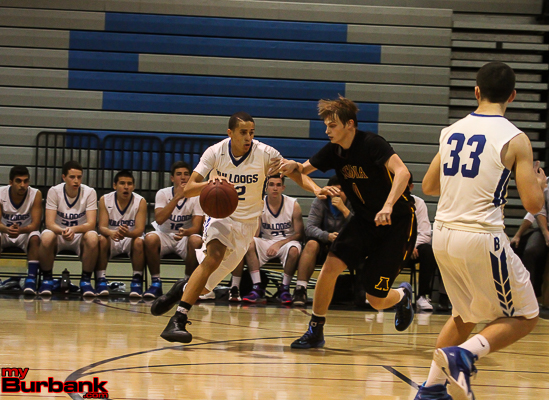 With a roster that features three seniors, three juniors and seven sophomores and very little experience returning from a year ago, this year’s edition of Burbank boys basketball is very young. But don’t tell that to Coach Jerry DeLaurie or his youthful Bulldogs. They are here to compete now and the results have been positive thus far. 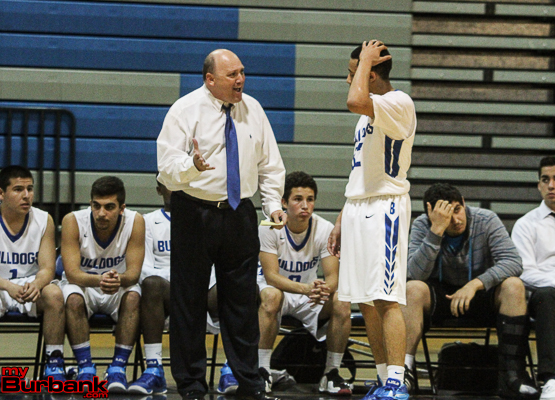 Coach Jerry DeLaurie gets the most out of his players (Photo by Ross A. Benson)

For most of the game, Burbank played very well with strong defensive play and a willingness to share the ball on offense and in transition. Then signs of youth appeared in the fourth quarter when Arcadia outscored Burbank, 21-7, to mount a furious comeback only to fall short by one point.

In the end, DeLaurie was very happy with his team and the direction they are headed.

“There were signs of brilliance from the kids out there. They play unselfish team basketball. Nobody has counted on us to do anything in league and that’s our motivation,” DeLaurie said. “We are going to compete, we will play hard and we will leave everything out on the floor. That’s what we did tonight.

“We are trying to develop some leadership. We had two or three different situations where we let them back in the game. But we have some really smart kids and we will learn from our mistakes. We were so motivated to play the first game of league. We grew up tonight. A win is a win. We are going to learn from this and move forward.”

Burbank set the tone early jumping out to a 9-0 lead ignited by sophomore guard Mike Woods (12 points) who knocked down a three-pointer and scored on a baseline layup. Woods scored seven points in the quarter to pace the Bulldogs. However, the Apaches bounced back and tied the game at 17 apiece entering the second quarter. 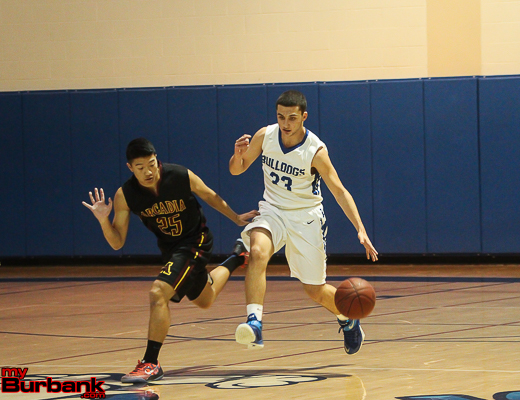 Tied at 23, Burbank ended the first half with a flourish outscoring Arcadia 8-0 to take a 31-23 lead into the break. Woods found junior Ellie Hanno on a fast break with a nice pass to give BHS a 25-23 advantage. Back-to-back three pointers by senior Adrian Gonzalez and sophomore Ben Chavez sent the Bulldogs into halftime with momentum.

“Basketball is a game of runs,” Woods said.

Burbank (9-4, 1-0) picked up where they left off starting the third quarter with another 8-0 run to push the lead to 39-23. Hanno scored six of his game-high 17 points in the quarter as the Bulldogs entered the fourth period leading 47-32.

Then things got interesting.

Burbank’s lead was cut to 52-48 when Hanno rebounded a missed shot and scored on the put back with 1:04 remaining to push the lead back to six. 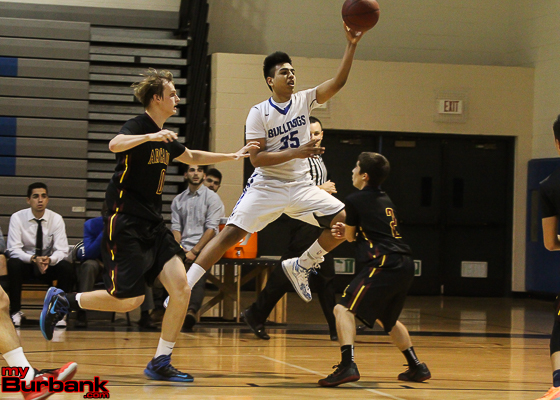 Ben Chavez passes to an open teammate (Photo by Ross A. Benson)

Hanno, Woods and Chavez (12 points) form a talented trio that played together a year ago on varsity and still have another year ahead of them. They combined for 41 of the team’s 54 points.

“We are all young,” said Hanno, who was named All-Tournament at the Katella Tournament. “We just need to mature and that will come by age.”

“Ellie is playing really hard especially on defense,” DeLaurie said. “Guys like Woods and Chavez feed off of him. He’s slowly becoming a leader.”

Woods has blossomed into one of the elite guards in the Pacific League. He displayed his improved all-around game with pull-up jumpers, knocking down threes, driving strong to the basket and facilitating the fast break with crisp passes that resulted in several assists.

Woods finished with seven assists and 10 rebounds for a near triple-double.

“His passes were phenomenal,” DeLaurie said. “Mike can be one of the best guards in the league. He does so much for us.” 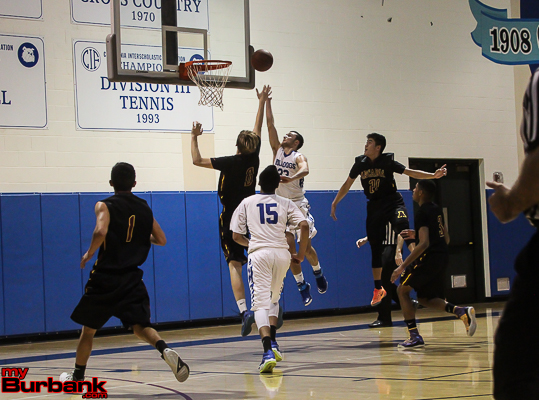 Burbank is now 9-4 on the season (Photo by Ross A. Benson)

“We have a lot of sophomores and a bunch of them were on JV’s last year so they are inexperienced. But we can do this. We just need to keep working hard in practice,” Woods said. “I talked to the team before the game. I told them to keep their heads up and not get caught in the spotlight. They listened and we got the win.”

Burbank presses forward with big upcoming games on the road at Muir, at Crescenta Valley and at Hoover.