Burbank put together a dominating effort on both sides of the ball as the Bulldogs pounded Pasadena, 34-8, Friday night at Pasadena High. It was the third consecutive win in league for BHS as they remain tied for the lead with Muir at 3-0. 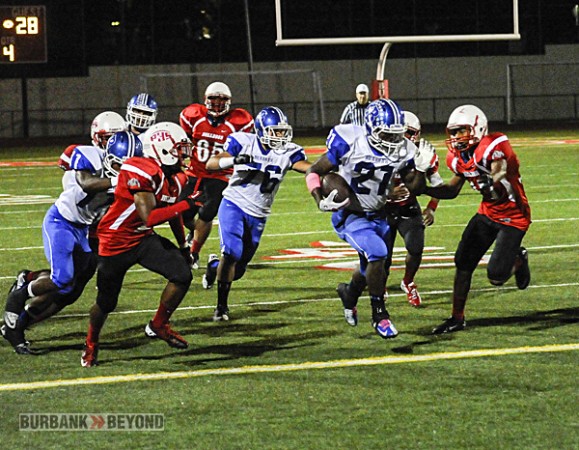 James Williams had his third straight game of at least 100 yards as he rushed for 142 on 12 carries including three touchdowns. Teddy Arlington narrowly missed his third 100 yard effort of the season as he complimented Williams with 98 yards of his own on 18 carries. The dynamic duo accounted for all five touchdowns scored by Burbank.

In the “Battle of the Bulldogs”, Burbank came out hungry early on staking itself to a 14-0 lead behind Arlington’s 14-yard touchdown run and Williams’ 54-yard bolt with 4:06 remaining in the first quarter. 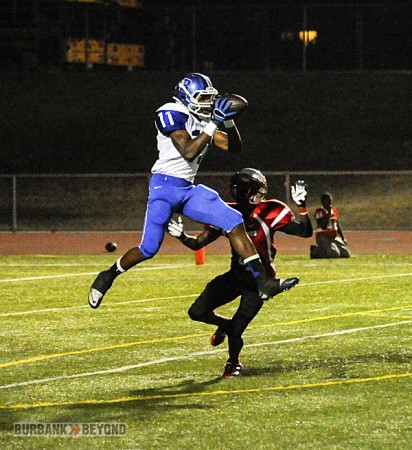 Williams tacked on another touchdown with a four-yard run to increase the Burbank lead to 21-0 with 8:04 left in the first half.

While Williams and Arlington ran efficiently and scored two more times in the fourth quarter, the BHS defense again displayed the physical prowess and tenacity that will be needed to win a league title. Burbank (4-2, 3-0) pressured Pasadena quarterback Caleb Devine throughout the game and the BHS front seven dominated the line of scrimmage.

Burbank took a 4-3 advantage in the series against Pasadena with the two teams alternating wins each year since 2006.

On this night in the city of roses where red is the dominant color, the Bulldogs in blue were mightier and tougher when it was all said and done.