As the sun set and the temperature dropped, the excitement and anticipation rose when the Burbank High football team raced onto Memorial Field for the season opener Friday night against Bell Gardens.

The Bulldogs led from the outset and were never challenged in the nonleague clash as a mixture of runs and passes were enough offense and a rugged defense stepped up which accounted for a 33-14 triumph.

“This was a weird game,” Burbank coach Hector Valencia said. “There were so many penalties that killed the tempo. I don’t want to say the referees controlled the game, but they sure called a lot of penalties. Maybe because it was the first game.”

Valencia added: “We controlled our destiny. Our timing was a bit off, but we’re happy about having play-makers. Last season it was mostly run the ball. This year we’re more balanced. We can run and pass.” 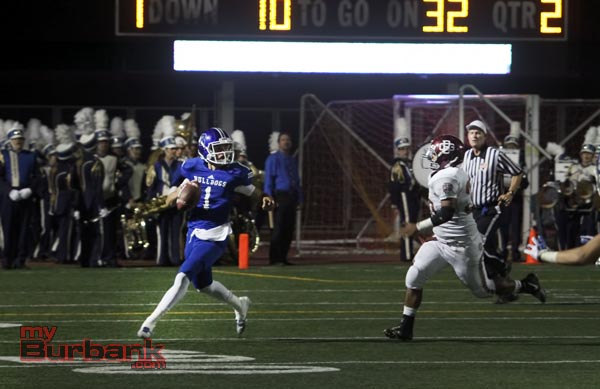 Ryan Meredith completed 11 of 14 passes for 164 yards, three touchdowns and no interceptions (Photo by Ross A. Benson)

The initial score came after a blocked punt was recovered by senior strong safety Kalani Williams at the Bell Gardens eight-yard line.

“We’re better than that,” said Meredith, who completed 11 of 14 pass attempts for 164 yards and no interceptions. “There were a lot of penalty flags and they took a lot of momentum away from us.”

Meredith was asked if he feels more confident this season.

“I have more experience,” he said. “I know that we’re not just a running team. Now we can pass the football.”

Meredith carried the ball eight times, was sacked twice and finished with minus two yards.

“I’ll run with the ball when I have to, but I’m more of a pocket passer,” he explained. 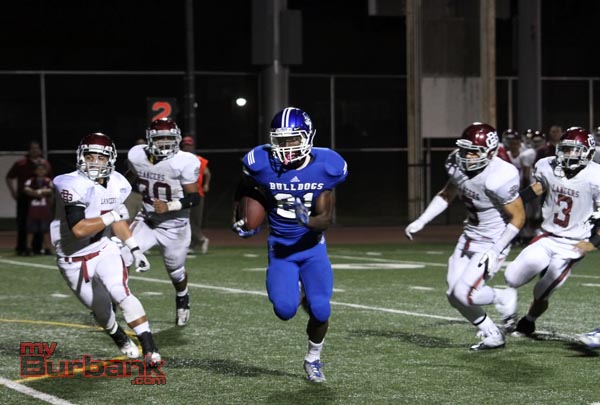 James Williams ran for a touchdown and caught one as well (Photo by Ross A. Benson)

The Bulldogs’ lead expanded to 13-0 with 4:15 showing before halftime when junior running back James Williams scored on a two-yard burst.

With 13.6 seconds remaining before the intermission, Burbank, which had 111 yards on the ground and 275 total net yards, seized a 19-0 advantage when Meredith located Brown (36 yards and three catches) with a 23-yard strike.

Burbank’s margin became 27-0 when junior running back Tony Toledo capped a 53-yard, six-play march after trotting in from two yards out and 9:19 showing in the third quarter.

Meredith’s two-point conversion pass to Brown found the mark as the Lancers (332 total yards) were in deep trouble.

“The good part is that we got off the ball and we made big plays when he wanted to,” said Williams, who rushed for 71 yards on 10 carries, along with making two catches for 61 yards. “We still need to work harder. The penalties made me mad.” 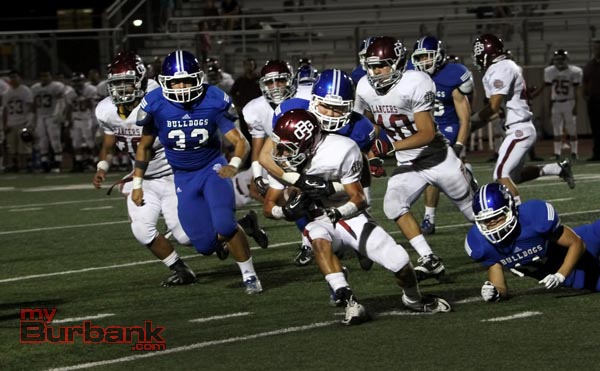 Burbank’s defense wrapped up Bell Gardens for most of the evening (Photo by Ross A. Benson)

On Bell Gardens’ next possession, the Lancers drove from their 19-yard line under quarterback Charles Ontiveros (23 of 33 for 196 yards with two interceptions), but the drive stalled at the Burbank 46-yard line after Kalani Williams’ interception.

But the Bulldogs could not turn the mistake into points as James Williams was dropped for a five-yard loss on fourth down and three at the Burbank 48.

The next time the Lancers had the ball they finally scored to make it a 20-point deficit when Ontiveros closed out a five-play, 43-yard march with a four-yard scamper and 2:03 left in the third quarter.

Bell Gardens chopped the lead to 27-14 with 6:20 showing in the final quarter after Ontiveros unloaded a 13-yard pass to wide receiver Anthony Chavez (40 yards on four receptions). 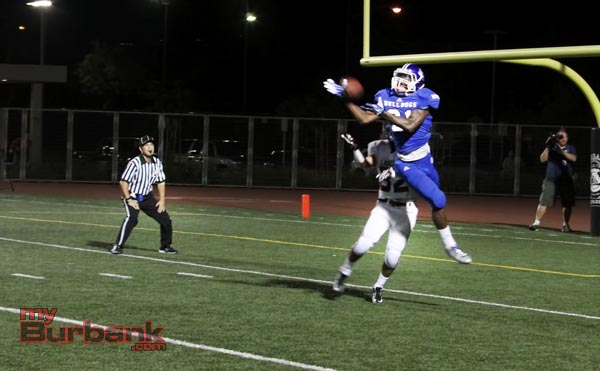 James Williams makes an acrobatic catch for a TD (Photo by Ross A. Benson)

Burbank (1-0) finished off its scoring when Meredith drilled James Williams with an 18-yard throw and 3:10 left in the final quarter.

The drive came after the Bulldogs’ defense held Bell Gardens on fourth down and one at the Lancers’ 11.

The game was put to rest when BHS senior linebacker Gary Clements intercepted Ontiveros with seconds left after Bell Gardens drove from its 21-yard line to the Burbank eight.

Burbank next plays at Canoga Park on Friday night at 7 p.m.

In other games, Burroughs (0-1) jumped out to an early 7-0 lead on the road at Paraclete only to see the Spirits score 25 unanswered points in a 45-14 defeat. The Indians scored right before halftime to make it 25-14 but they couldn’t muster any points in the second half as Paraclete rolled to the easy win.