A pair of robbery suspect police believe may be responsible for over a dozen late night robberies of gas stations and convenience stores, were captured after they held up a 7-Eleven store in Burbank last night. 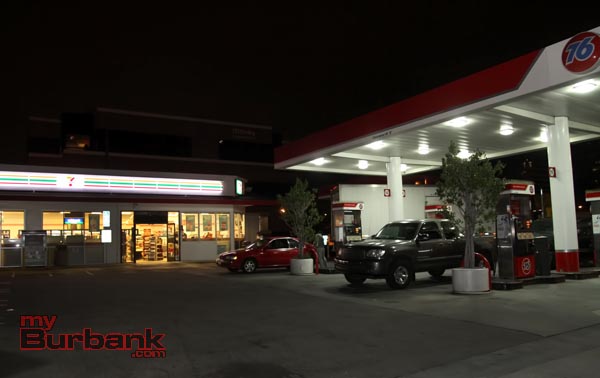 7-11 store that got robbed at Hollywood Way and Alameda Ave that is part of 76 station. (Photo by Ross A. Benson)

Burbank Police responded to the 7-Eleven store located inside the 76 gas station at Hollywood Way and Alameda Ave. around 10:45 p.m. When they arrived at the location, Los Angeles Police Department officers were already on scene.

A task force of approximately two dozen detectives had been tailing the two men suspected in the robberies.  When the suspects left in their get-away car, LAPD was right behind them. The gas station is located near two on-ramps to the westbound 134 freeway, and a block away from an eastbound on-ramp.   The suspects fled on the 134 freeway to the 170 freeway, exiting at Victory Blvd.  They then proceeded north on St. Clair St., before officers stopped them adjacent to Valley Plaza Park. 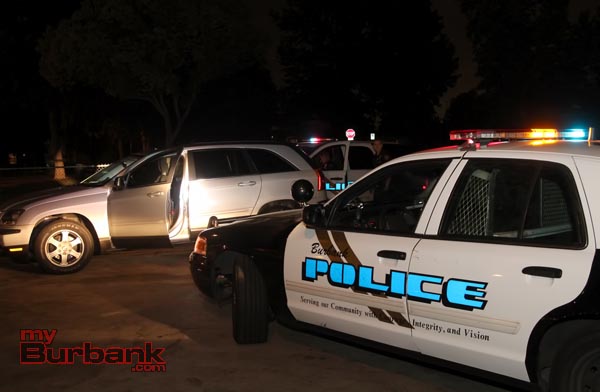 Burbank Police wait for a tow truck so they can impound the suspects car in North Hollywood. (Photo by Ross A. Benson)

The two suspects, both residents of North Hollywood, were  arrested for robbery and booked into the Burbank Jail. Connie Orlando Walker, Jr., 34, is being held on $100,000 bail.  His partner, Jerome R. Collins, 30, had his bail set at $104,145 due to outstanding warrants in addition to the robbery charges.

No one was injured in the robbery and subsequent arrest of the suspects.  An unknown amount of money was taken in this latest robbery.