The Bulldogs bolted out of the gate and beat Monrovia 23-8, but then lost to Canyon 14-6.

The Vikings were defeated by powerhouse Santa Margarita 56-0, but bounced back with a 42-35 triumph over Hart. 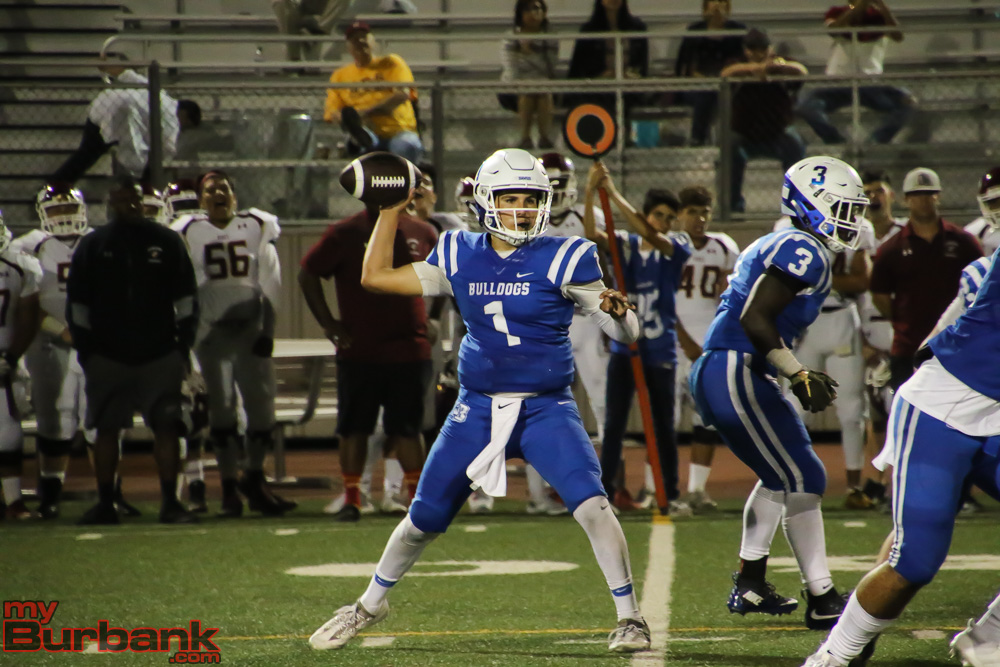 Quarterback Matthew Porras scored the only touchdown for the Bulldogs. (Photo by Ross. A. Benson)

It was apparent early that Downey’s schedule was much more demanding as the No. 7th-ranked team in the CIF Southern Section Division IV, handled the Bulldogs 35-7 at Memorial Field.

Burbank avoided the shutout when quarterback Matthew Porras scampered in from 12 yards out as 3:55 remained in the fourth quarter.

Porras, a junior, completed 15 of 26 passes for 124 yards, but was intercepted twice by senior free safety Nicholas Whitney in the opening half. 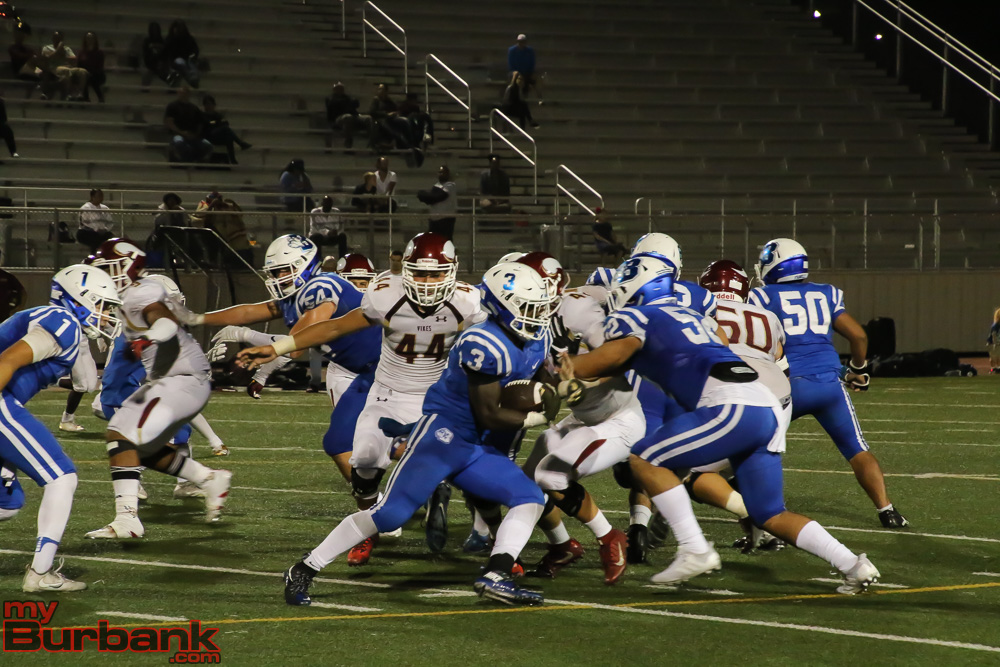 Senior running back Darnell Williams gained 34 yards on 20 carries against Downey. (Photo by Ross A. Benson)

The Bulldogs are coming off a season in which they went 10-4 overall before losing in the Division VIII title game.

Burbank has a bye next week, but will host Glendale on Sept. 21 to commence the Pacific League portion of its schedule which culminates Nov. 3 when it meets city rival Burroughs.

“This is the best team we’re going to play all season,” first-year Burbank coach Adam Colman said. “This is a young team and it’s still learning.”

Colman, who played quarterback for the Bulldogs a number of years ago, said that he was pleased with the effort.

“I’m proud of how they fought and that’s pride,” he said. “That touchdown at the end was important. We moved the ball well, but we didn’t convert in the red zone.” 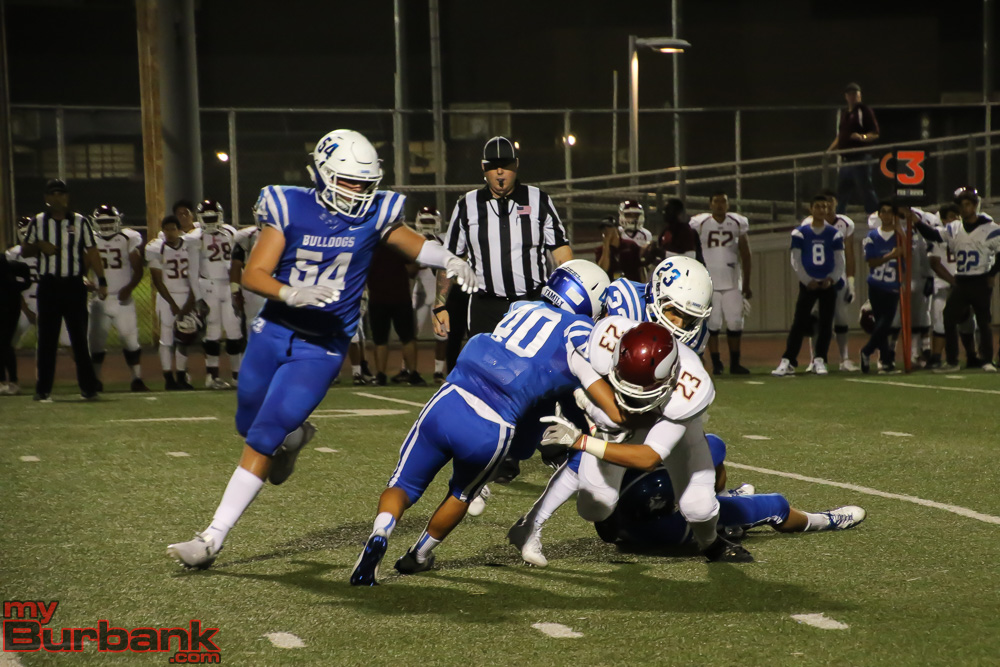 Burbank’s defense was on the run most of the night versus the Vikings, who won 35-7 in a nonleague game. (Photo by Ross A. Benson)

Downey senior running back Baraq Ross finished with a game-best 202 yards on 19 carries and tallied four rushing touchdowns, including three in the second half when the Vikings outscored the Bulldogs 21-7.

After Burbank (1-2) punted on its initial possession, Downey took over at the Burbank 33-yard line. 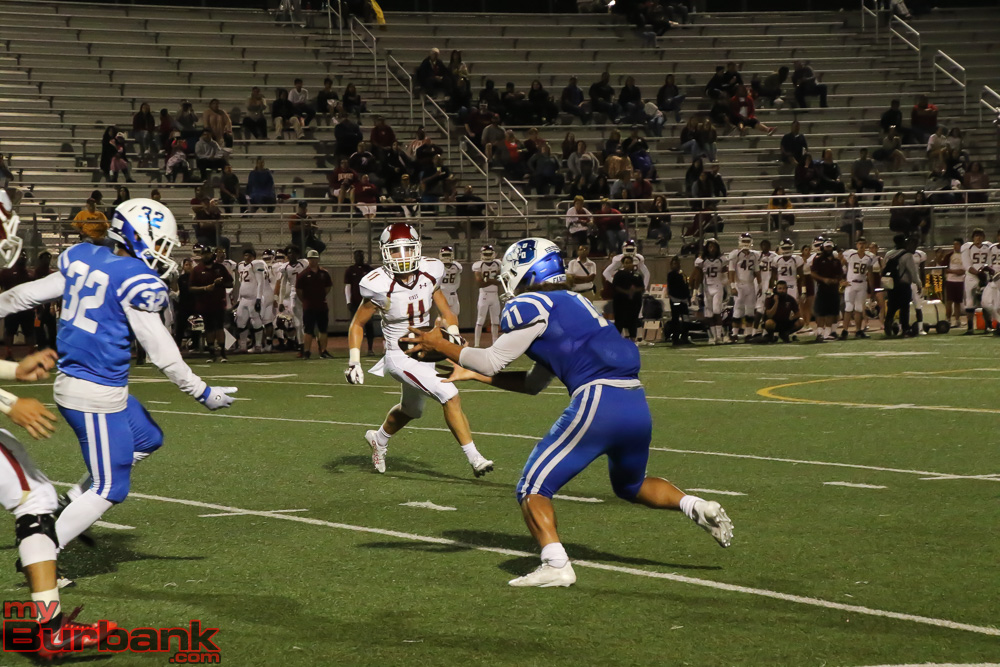 Downey’s advantage was extended to 21-0 on its first series of the second half when Ross broke off a 70-yard sprint down the left sideline for a touchdown with 10:55 remaining in the third quarter. 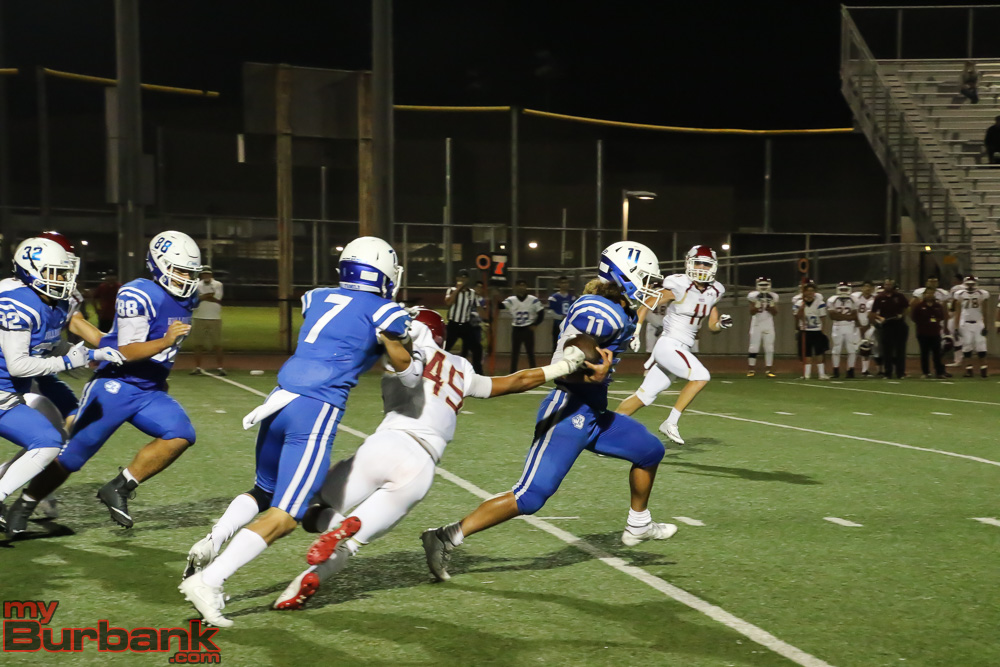 It’s off to the races for Pendleton against highly-ranked Downey. (Photo by Ross A. Benson).

Burbank (212 total net yards) followed that with a march from its own 40-yard line to the Vikings five when Porras (54 yards on 11 carries) failed to complete a pass on fourth down.

The Vikings (524 total yards) proceeded to make it 28-0 when Foots, a quick and agile quarterback who passed for 213 yards on 15 of 22, drove the team from their five-yard line and used 13 plays with a five-yard run by Ross the capper as 1:53 was left in the third quarter.

Downey powered ahead 35-0 with 8:10 on the ticker in the fourth frame when Foots directed the Vikings 62 yards as Ross located the end zone with a 17-yard dash.