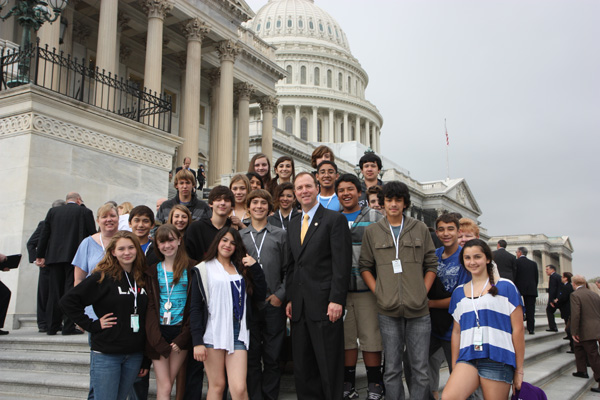 Middle school students from Burbank paid a visit to Representative Adam Schiff (D-Burbank) this past week, while they were touring the nation’s Capitol during their spring break from school.

On March 21, Schiff met with 20 eighth grade students from Luther Burbank Middle School.  During their half-hour meeting with the Congressman on the steps of the Capitol, the students had an opportunity to ask the Congressman about his positions on various issues that affect his district.  Questions were asked about the issues he works on daily, and about his travel to and from Burbank to Washington.

The following morning Schiff met with 40 student in the 7th and 8th grades from David Starr Jordan Middle School.  For over 20 years, students from the school have visited Washington, D.C. while on spring break.  During their meeting with the Congressman, they asked about the votes that were being taken that day in the House of Representatives.    The high gasoline prices, and the federal budget process were also discussed.

“It was great this week to meet with Burbank students from both Luther Burbank and Jordan Middle Schools in Washington, D.C.,” said Schiff, adding, “These young students asked such good questions, were curious about every aspect of government, and incredibly eager to learn.   It was a privilege to speak with them, and I hope they all had a memorable visit to our nation’s Capitol.”

Congressman Schiff Speaks on the Anniversary of the January 6 Insurrection