Burbank is preparing for another possible “flash mob” style gathering of automobile enthusiasts on Tuesday evening at the Empire Center.  While not sanctioned by Krispy Kreme Doughnuts, Inc., the event has been promoted via social media, including Facebook which has references to the event dating from July 2011. 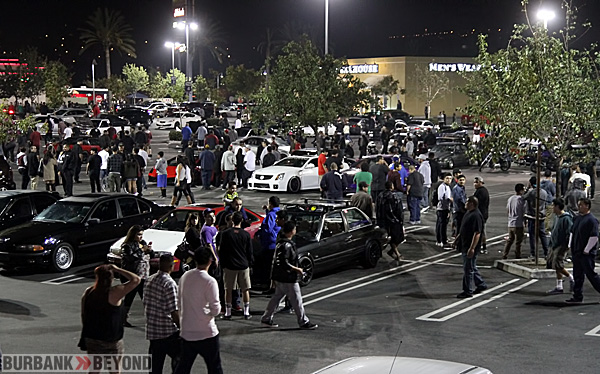 Back in 2012 during the evening every parking spot was filled with cars or people. (Photo by Ross A. Benson)

The Burbank Police also understand the potential of several thousand automobile enthusiasts converging in an informal rally event at the Empire Center could create serious traffic issues, and possible safety issues due to the potential of illegal activities such as street racing, drifting, and burnouts.

Sgt. Cornils continued that the Burbank Police Department will be fully deployed in the area to enforce all applicable laws, including those involving illegal engine/vehicle modifications. 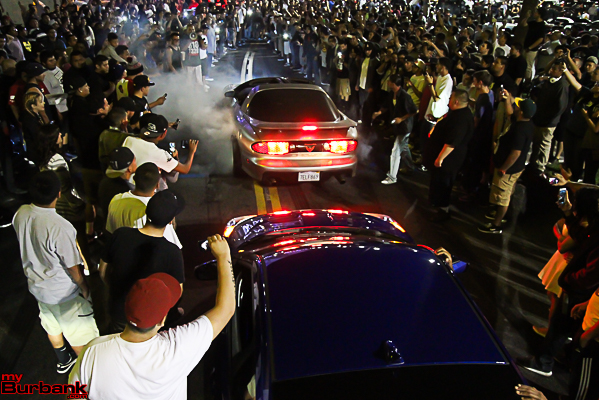 Burbank residents, visitors, and workers should be aware the event is planned, and avoid the area if possible.  If the car rally does occur, then it is possible the Burbank Police Department will set up access controls, possibly blocking roads or direct access to the area as needed to ensure public safety and crowd control.

In the past Burbank Police have been supported by other law enforcement agencies controlling Krispy Kreme Tuesdays, including Glendale PD and the California Highway Patrol.