Actor Gerald McRaney of TV’s “Deadwood”, “Simon and Simon” and “Gunsmoke” will lead the 34th annual Burbank On Parade set for 11 a.m. Saturday, April 25. The parade travels east along Olive Avenue from Keystone to Lomita streets.

In keeping with this year’s theme “Burbank — City of the Wild Wild West”, entries include the Wells Fargo Stage Coach, equestrian riders and TV stars including former Mouseketeer Johnny Crawford who also played Mark McCain in the Western TV series “The Rifleman” from 1958 to ’63. He’ll be doing rope trips on horseback.

Food trucks will be in the Izay Park parking lot at Griffith Park Drive and Clark Avenue, from 11 a.m. until 2 p.m. There will be an awards ceremony in the same location immediately after the parade ends at 1 p.m. Westernmusic and line dance instruction will follow the awards presentation.

“We will be celebrating the community as always,” said parade President Carey Briggs. “Burbank On Parade is the celebration of the community of Burbank and all the different things that make Burbank a special place to live.”

Local dignitaries appearing in the parade include Burbank Mayor David Gordon and the City Council members, Congressman Adam Schiff, school board members and airport and library commissioners. Local veterans will be waving from military vehicles. Members of the Burbank Historical Society will be riding in an antique bus that was built 1922 at the Moreland Motor Truck Co. in Burbank. High school bands and drill teams will perform down the parade route. Girl Scouts troops will be aboard a huge truck decorated in the Western theme.

“What makes it fun for me is to go through all the hard work and then go down the parade route and see what I call little Bobby,” Briggs said. “He is the little brother of the Girl Scout who had to be there with her troop by 9:30to be in the parade and he got dragged along. But by the end of the parade, he’s got the biggest smile and that’s what gives me joy volunteering on the parade.”

It will be fun to see how longtime parade participants Dave and Diana Hoch decorate their antique horse-drawn carriage for the parade, said Linda Barnes, equestrian co-chair of the parade. Councilwoman Emily Gabel-Luddy, the couple’s neighbor, will be riding in the carriage.

“As the parade carries a western theme this year, we can’t wait to see what wonderful goodies the Hochs dig out of the massive treasure chest to decorate themselves and their carriage,” Barnes said. “It’s always a wonderful entry in our parade.”

A huge hit with the children is the Burbank Bob Hope Airport Fire Department’s Aircraft Rescue Firefighting Vehicle, returning to the parade for the 10th year, said Lucy Burghdorf, the airport’s manager of public relations and government affairs. When it shoots water 50 to 75 feet into the air, the children love to run under the spray.

The Burbank Tournament of Roses Assn. has repurposed characters from the 2015 Rose Float and integrated them on a smaller float for this year’s Burbank On Parade. It is sure to be a surprise worth waiting for as it is the final entry of the parade.

Burbank On Parade is a nonprofit 501 (c)(4) organization run entirely by volunteers. This annual celebration of Burbank would not be possible without the generous support of the City of Burbank, businesses and residents. For more information, visit burbankonparade.com. 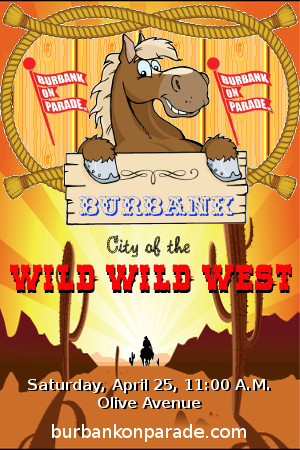