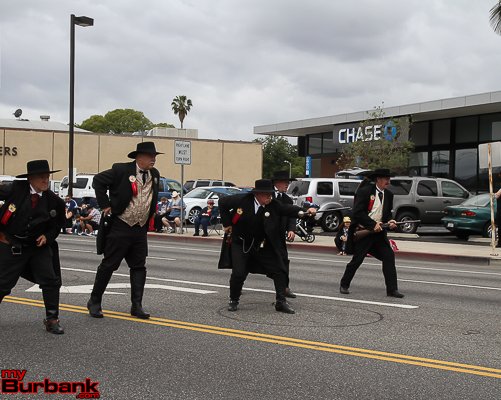 Mother Nature must have had a grandchild appearing in Burbank On Parade Saturday because about a hour after the last entry turned the final corner at Olive and Lomita, it started to rain.

In keeping with the western theme, “Burbank — City of the Wild Wild West” festivities began 15 minutes early with the Gunfighters for Hire — a shoot-’em-up group of bad dudes.

A few minutes after 11 a.m. the Burbank letters made their way down the route decorated appropriately and pushed by several volunteers.

Grand Marshal Gerald McRaney was decked out handsomely in a black hat and western-style suit and red shirt. He led a group of western celebrities including the Reel Cowboys, Geri Jewell and Jamie Nudie.

Nudie is the granddaughter of Nudie Cohen the rodeo tailor, whose famous shop on Lankershim Boulevard was a hangout for all of the cowboy stars. Nudie was the first tailor to set rhinestones on clothing, and his bedazzled suits have been worn by everyone from Johnny Bond and Johnny Cash, to John Lennon and Michael Jackson. Jamie Nudie keeps the legacy alive by renting her vintage suits and cars for events.

All the western celebrities were guests of the Reel Cowboys, a nonprofit organization of men and women who have spent their lives and careers working both in front of and behind the camera. The group’s president, Robert Lanthier, will be presenting his Silver Spur Awards as a part of the “Gunsmoke 60th Anniversary Show scheduled for Sept. 18 at the Sportsmen’s Lodge.

The City of Burbank was well represented by officials including Mayor David Gordon, Vice Mayor Bob Frutos and council members Emily Gabel-Luddy, Jess Talamantes and Gary Bric. Burbank Police Chief Scott LaChasse and Fire Chief Tom Lenahan were there. And Congressman Adam Schiff had the best seat in the house riding on the Wells Fargo Stage Coach, which won the Grand Marshal Award.

Brooks Gardner, who had portrayed the cowboy on the Black Angus commercials, waved to the crowd. He’s retiring this year as drama teacher at Burbank High School.

For the first time, Burbank and Burroughs high school marching bands marched together as the “Burbank Burroughs All City Band.”

Tim Conway Jr. of iHeartRadio made his second consecutive appearance in the parade.

The prettiest costumes were worn by Zahra’s Belly Dance classes.

Burbank Tournament of Roses Assn., as always, served as the finale and dressed up the monkeys from its Rose Parade float in cowboy hats and placed some of them in a make-believe jail.

The 34th annual parade was a culmination of some eight months of work by the volunteer committee led by President Carey Briggs and Parade Chairwoman Joanne Lento Miller.

“It was fabulous,” Miller said after the parade. “The most fun yet! We kicked it off with a bang — literally. The Gunfighters For Hire got the crowd ready. We were so excited to host Grand Marshal Gerald McRaney from “Gunsmoke’ and ‘Deadwood’, Roy Rogers’ granddaughter Julie Rogers, Jamie Nudie with Nudie’s original western car and community entries galore.”

The western theme was embraced wholeheartedly by participants and spectators alike, Miller said.

“This was a good theme for the crowd,” she said. “Everyone came decked out in their best western duds. The Burbank On Parade volunteers produced a truly memorable event.”

We caught up with McRaney at the disbanding area before he and all the western celebrities piled into Jamie Nudie’s grandfather’s 1975 Cadillac El Dorado convertible, which is embellished with saddles, silver dollars and cow horns.

“It was a pleasure, number one, for the Reel Cowboys to invite me to be a part of something again,” McRaney said. “Burbank is home to me really. I live in Studio City but all the business that we do our doctors and everything are right here in Burbank. My wife’s favorite place to go sit and have lunch is Paty’s.”

McRaney is married to actress Delta Burke from the TV show “Designing Women.” They both worked on the Warner Bros. lot when it was known as The Burbank Studios.

“So Burbank is a big part of our lives and it’s nice to have been a part of this parade,” McRaney said.