For the third time since April 1, Burbank police have arrested 20-year-old Lucas Lepejian of North Hollywood, the son of owner Baret Lepejian around 9:40 am on April 6 on a Burbank Municipal Code Violation for removing sandbags that were put in front of the doors of Tinhorn Flats by the City of Burbank earlier today.

According to Brimway, “Lepejian was arrested by officers in front of Tin Horn Flats for altering efforts the City has implemented to prevent entry into the establishment, due to the unsafe conditions and to be compliant with the City’s safety codes. He was booked for 9-1-1-114(e) BMC. He was cited and released on a citation to appear in court at a later date.”

According to the Burbank Municipal Code, section 9-1-1-114(e) states, “Violation Penalties: Any person who violates a provision of this Building Code or fails to comply with any of the requirements thereof or who erects, constructs, alters, or repairs a building or structure in violation of the approved construction documents or directive by the Building Official, or of a permit or certificate issued under the provisions of this Building Code, shall be subject to penalties or other remedies set forth in this code.” 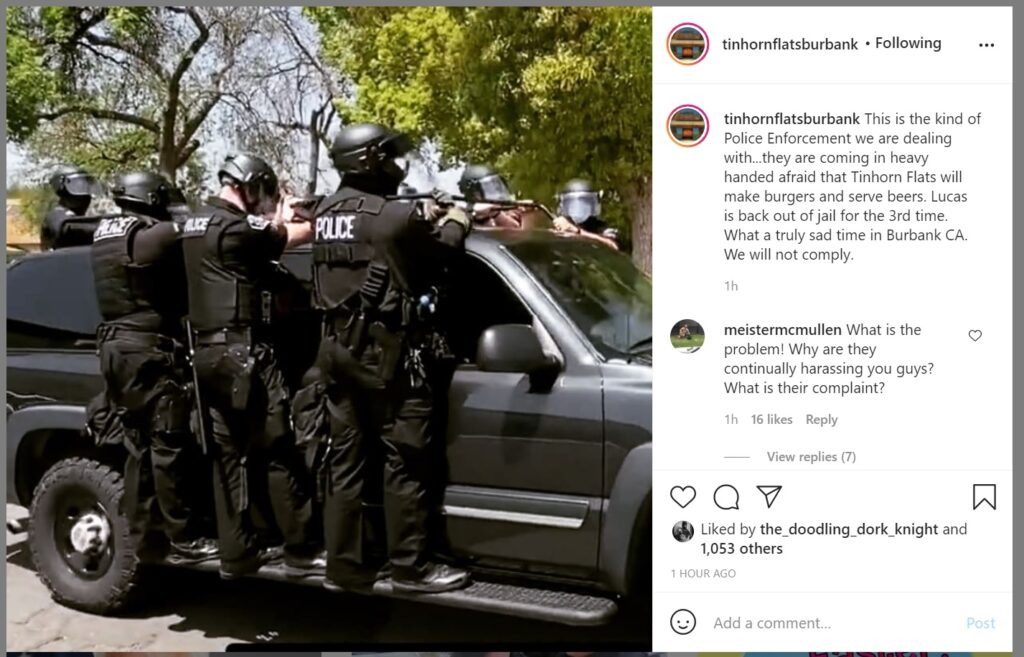 There is also a note on the bottom of the section that reads, “Any person violating the provisions of this Code shall reimburse the City for any and all costs, expenses and fees incurred by the City in responding to, investigating, assessing, monitoring, treating, cleaning, removing or remediating any violation of this code. Such costs, expenses, and fees to be paid to the City shall include all administrative expenses and all legal expenses, including costs and attorney fees in obtaining compliance and in litigation, including all costs and attorney fees on any appeal.”

This is now the third arrest for Lucas Lepejian, who was arrested on April 1 and arrested again on April 2.

While the first and third arrests were citations to appear in court, in the second arrest, he had to post $5,000 bail to be released. All three arrests were misdemeanors.

On Tuesday at 11 am, a protest was called in front of the restaurant on Magnolia Blvd. during the day. Some of the protesters used the occasion to promote their causes, such as recalling Governor Newsom. Some of the signs used profanity which was visible to anyone driving by.

Burbank police were in the area the entire time, monitoring the situation.

A little after 3 pm, a caravan of protestors drove and circled the Burbank Downtown area a couple of times and also went by the residence of Burbank Councilmember Konstantine Anthony. It is unknown if Anthony was home at the time.

Baret Lepejian posted to Facebook that he was stranded in another country that he was visiting when the pandemic struck and has been unable to travel home because of travel restrictions. Facebook has taken down the Tinhorn Flats page.