Since August 29, Burbank Police have made 24 DUI arrests, over the course of three three-day weekends, including seven arrests this past weekend, from Friday evening September 13 to Monday morning September 16. This increased focus is apparent in the numbers of DUI arrests and accidents between 2012 and 2013. 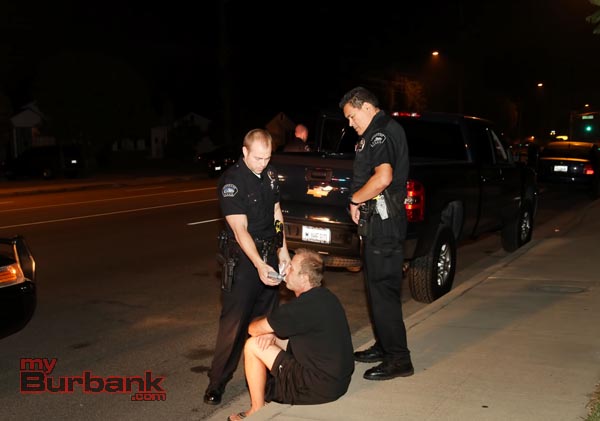 Burbank Police Officers administer a Field Portable Breath Test, prior to transporting the suspected DUI driver to St. Joseph for a blood test. (Photo by Ross A. Benson)

In 2012, total DUI arrests in Burbank numbered 390 for the year: 286 were observed (patrol officers pulled over suspected DUI drivers) and 104 were the result of accidents. From January 1 to September 18, 2013, there have been 334 total arrests: 282 were observed and 52 were accidents. The number of drivers arrested for DUI before getting into an accident in 2013 is almost equal to the yearly total for all DUI arrests in 2012. The tally of DUI-related accidents in 2013 is way down, at half of the yearly total for 2012.

“The Burbank Police Department is totally committed to traffic safety and is particularly sensitive to those violations that cause death, injuries and serious property damage. Toward that end, it is the objective of the Department to combat driving under the influence (DUI) violations by employing education and enforcement strategies,” comments Burbank Police Chief Scott LaChasse. “By being responsible and using good judgment, DUI offenses are avoidable.” 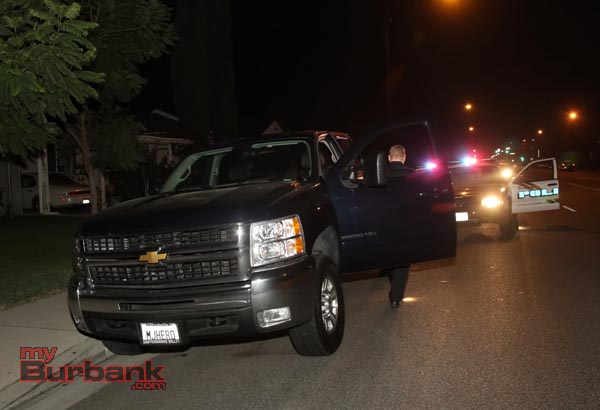 Damage to the front of the striking truck. (Photo by Ross A. Benson)

Early this morning, Wednesday, September 18, at 1:00 a.m., a DUI-related crash between a truck and a police car occurred on Magnolia Blvd. near Lincoln Street. A patrol officer had stopped in the number one lane of westbound Magnolia Blvd. to check on another officer’s traffic stop. The officer in the number one lane noticed lights bearing down from behind at a high rate of speed, so he sped up in an attempt to avoid collision. The oncoming vehicle stopped, then rolled forward hitting the patrol car and continued pushing the patrol car westward down Magnolia Blvd. 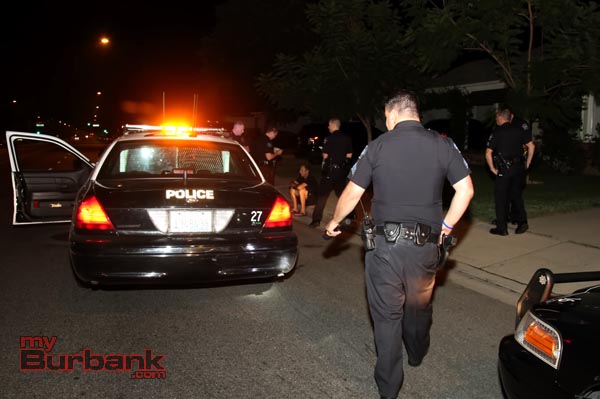 Burbank Police Sgt. Claudio Losacco looks at some of the damage after a patrol officer was struck by a DUI driver. (Photo by Ross A. Benson)

The officer turned his car away from the truck, and the suspect vehicle, a 2008 Chevy Silverado, continued westbound on Magnolia and then south on Buena Vista St. at about 15 miles per hour. The truck pulled over on the 600 block of Buena Vista St., near Clark Ave., after running up onto the curb and back down onto street. The driver, Michael Christopher Joanou, 51, of Burbank, admitted to using prescribed narcotics. Mr. Joanou failed a field sobriety test, his vehicle was impounded and he was arrested for a misdemeanor DUI for drugs, a hit and run misdemeanor and driving on a suspended license. Currently on probation for a past DUI, Mr. Joanou’s bail was set at $25,000.

Police and paramedics were also called to a DUI-related accident scene at Victory Pl. and Lake St. around 4:00 a.m. Sunday morning, September 15. The female driver of a 1998 Honda Accord hit the light pole at Lake St. and was trapped in her car. Firefighters were called to the scene and used the Jaws of Life to free her from the vehicle. The young woman, who had recently turned 27, exhibited signs of intoxication according to officers at the scene.

Due to the nature of her injuries, a possible two broken legs and internal bleeding, she was not arrested, but sent to County-USC hospital. Based on the outcome of the police investigation, if she is found to have been driving under the influence, she will be cited for a misdemeanor DUI, because she was the only person injured. If she had injured someone else, the charge would become a felony DUI.

The increase in DUI arrests and the decrease in the number of accidents for 2013 demonstrates that the Burbank Police’s commitment to stopping intoxicated drivers is working. Fewer accidents mean less injury, death and property loss and safer streets for all of Burbank’s residents.

Chief LaChasse adds, “The credit for the increased number of DUI arrests, and accompanying reduction in DUI-related collisions, is attributed to the dedication and perseverance of patrol and traffic officers as well as the proactivity and guidance of their supervisors.”