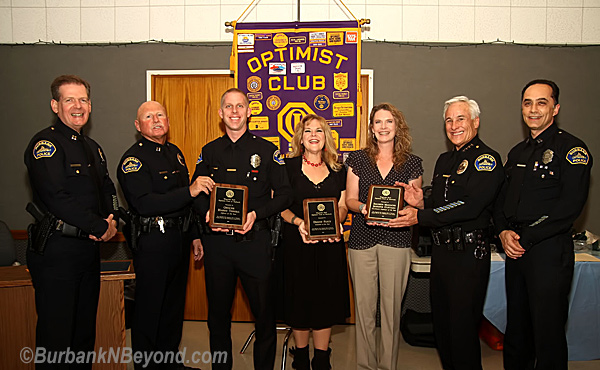 Burbank Police Chief Scott LaChasse and members of the police department community gathered at the Burbank Elks Lodge on Thursday evening as four of the department’s finest were honored by the Magnolia Park Optimist Club of Burbank.

“No one is receiving recognition for a single act” noted LaChasse. “Rather, each recipient is being honored for their sustained, distinguished service, leadership, teamwork, selflessness, and desire to continuously improve.  Each of our honorees is a credit to the Burbank Police Department.”

Terrill is also well-known for his knowledge and enthusiasm in DUI enforcement.  A two time recipient of the Mothers Against Drunk Driving (MADD) award for his efforts in eliminating drunk driving, Terrill has amassed more than 100 DUI arrests since 2010.

Terrill “is a supervisor’s dream” added LaChasse, “he is self-motivated, supportive, productive, ethical, and represents the true essence of professionalism.  He goes out and gets the job done, we are forever grateful.”

Crossman, who was unable to attend the ceremony, has been a member of the police reserves since 1986.  Amassing nearly 8500 hours of reserve duty, Crossman is the recipient of 21 commendations, and has the distinction of being Burbank’s first and only reserve motor (motorcycle) officer, making him “a valued member of the DUI task force,” according to LaChasse.

He has previously received the Reserve Officer of the Year award, in 1999 and 2008, and is noted for his continued development of the reserve recruiting program and leadership within the reserve group.

Fleck received the Volunteer of the Year award for her contributions as a volunteer at the Burbank Animal Shelter.  Joining in 2009, Fleck inspires both colleagues and friends of the shelter with her positive attitude and devotion to the job.  As an example, through her fund-raising efforts, Fleck was able to secure an X-Ray machine for the animal shelter, greatly improving the shelter’s ability to provide care for animals.

An evangelist for animal rights, Fleck believes a shelter volunteer should “be someone who is passionate about animals, and can also communicate and work well with humans.”  Fleck emphasizes that an animal adoption is a match of soul mates, a relationship for life, and she believes in the principle that “no adoption is better than a bad adoption.”

Jennifer has shown exceptional “grace under pressure” managing contractor access to the site, said LaChasse.  “She has been tested, and responded quite well.”

The Magnolia Park Optimist Club meets the first and third Thursday of the month at 6 p.m. at the Burbank Elks Club, 2232 Hollywood Way, Burbank. For more information, contact club president Terry Scott at (818) 842-7950.

Man Arrested for Copper Wire Theft After Confrontation on Roof