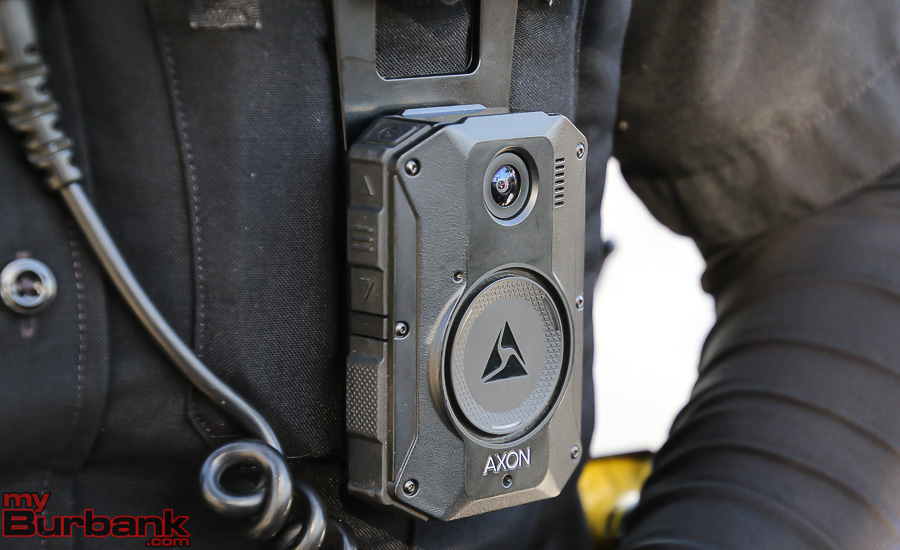 The Burbank Police Department has implemented a state-of-the-art camera system that integrates the various recording devices into one network and will allow the department to record events the officers encounter and access the video from a cloud server.

The camera system made by Axon, formerly Taser, the company that invented the Taser stun gun, is a multi-platform network that places cameras in a variety of locations and on the officers themselves. The camera network combined with a cloud server allows the department to record video, upload it to the cloud, and quickly access the video via a computer terminal or mobile device.

“The primary function [of the camera system] is so there is transparency. It’s also for prosecution, for accountability, personnel complaints, to protect officers from false complaints, and to make sure officers are abiding policy and treating people well,” said Meadows.

Officers for the first time will be wearing body cameras replacing the old audio-only Puma recorders. Lieutenant Mark Stohl described the entire Axon system during a presentation to the Burbank Police Commission in January.

“It’s very easy to use. So far, the reports have all been good, very favorable. We’re very happy with the vendor; they have been very attentive to our needs.”

In the video of the meeting, Stohl explained the small, box-shaped body camera is worn on the officer’s chest; the camera’s video is stored on the device itself. At the end of the day, the recorded video is uploaded, while the camera is recharging, to the system’s cloud server–Evidence.com. The color cameras are HD and record audio. Because the cameras are LTE [also known as 4G] capable, officers can be tracked on a map in real-time if their camera is recording. Because the camera is cellular, it can live stream when recording. A redaction feature is also available to blur the faces of individuals recorded.

The system’s cameras have the capability to pre-record 30 seconds of buffered video. It allows officers to review any incident that occurred up to 30 seconds before the camera started recording.

All the department’s 32 patrol cars have two of the new cameras installed. One camera is placed under the rear-view mirror; it’s activated when the light bar is turned on. The officer’s body camera is activated simultaneously. The second camera is facing the back seat to monitor prisoners. The cameras compliment the officer’s own body camera by providing an additional view of any encounters. Additional vehicles with new cameras are a jail transport van and two unmarked Ford Explorers. Videos are uploaded to the cloud using Wi-Fi installed in the department’s garages.

The department’s interview rooms and DUI room each have two cameras installed, additionally, two new aerial drones, purchased separately, with the cameras will allow video recording and live streaming from high above the ground. Video from the drones is uploaded to the cloud with an iPad.

One part of the system not yet deployed is the Taser. Officers are currently training in its operation. Axon calls its Taser a smart weapon. The stun gun is similar to the ones used by many police departments–Burbank officers will be using Axon’s most advanced model, the Taser 7. It communicates with the camera system via Bluetooth. When a Taser’s safety is disengaged and the laser pointer is activated, its signal unit can start the officer’s body camera recording.

Officer’s feedback on the new technology is overwhelmingly positive.

“It is wonderful, better than I had imagined.” Meadows said with enthusiasm.

An early objection to purchasing a new camera system was from the Burbank Police Officer’s Association. The association wanted the city to use the money for pay hikes and to recruit more officers. At the time the police were working without a contract.

“It was never about the technology, it was about fully funding the department,” said JJ Puglisi, President of the Burbank Police Officer’s Association. “The city should have focused on fully staffing [the department] before spending on technology.”

The association no longer opposes the new system.

The key element of the network is its cloud server at Evidence.com. The site stores all the department’s recorded videos and photos. Currently, the agency’s cloud is storing 65,000 pieces of unique evidence including videos, photos, police case files, and the number grows daily. Meadows oversees the department’s inspection unit.

“Not all videos are viewed–too much volume. They are reviewed on a case by case basis.”

The server’s evidence management system sorts the tens of thousands of files and allows sharing with the Burbank district attorney, with other police agencies and their district attorneys. Evidence.com is a multi-tasker. A citizen invite can be emailed or texted from the site asking Burbank residents to share videos or photos they have of an event. Officers can also send invites with their phones. When the data is received it is uploaded to the cloud. The cloud data is accessible 24 hours a day.

The system’s journey to the department took two years including the review of other companies’ camera systems. The Axon version was tested for nine months and deemed by far the best of the contenders.