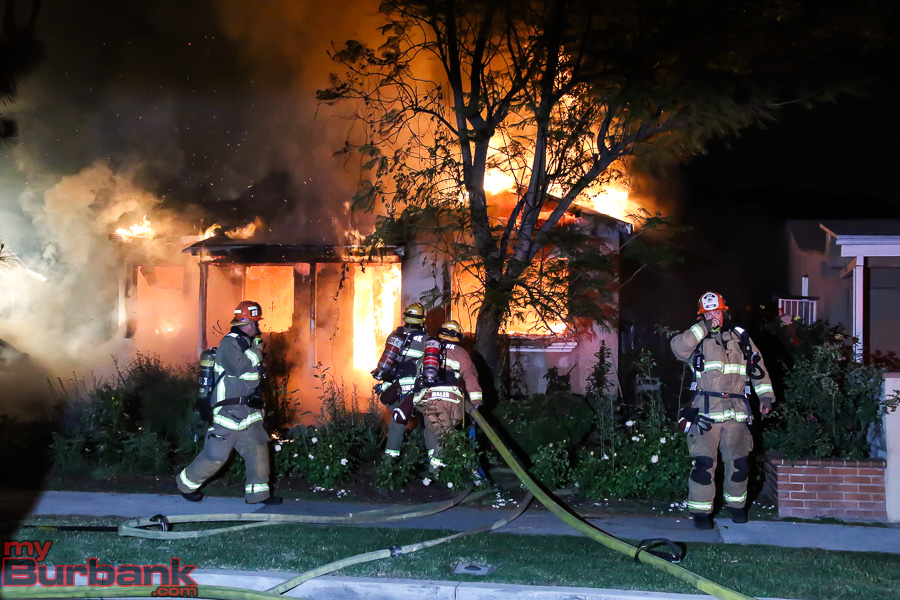 Burbank Police released the suspect’s name as Gilberto Siose, a 50-year-old man from Los Angeles. Siose was placed under arrest and booked for attempted murder, arson of an inhabited dwelling and an outstanding warrant for a traffic violation related to driving under the influence, according to Sergeant Derek Green in a press release. He is currently being held on a $6,045,000 bail.

The police reported that the suspect was involved in an incident earlier in the week in Glendale. during which he allegedly assaulted the same woman whom he targeted Friday night.

Siose allegedly used a handgun to force his way into the home, reported Green. Once inside the home, he “fired several gunshots and deliberately set fire to household combustibles.”

The fire burned for some time until the police could provide protection for the firefighters.

Burbank police rescued some animals from the house including rabbits and cats. They are being treated by the Burbank Animal Shelter but a few of those animals are deceased.

Burbank Police responded to a reported restraining order violation around 10:23 Friday night in the 1500 block of Niagara Street. When the first officers arrived they heard shots being fired from the rear yard.

They approached the house and found three individuals inside the home those same officers also saw a fire was started in the front living room. They assisted the individuals out of the house after breaking a window. The officers confirmed with the people they brought out that shots had been fired, and the suspect was still in the area.

Assisting the ground units was the Burbank Air Support helicopter and they observed a suspect fleeing the rear yard. A perimeter was set up and additional resources were requested. Burbank Police SWAT team along with K-9’s from Burbank and Glendale were deployed and  Pasadena and the City of San Fernando assisted with maintaining the perimeter where the suspect could have fled.

The Burbank Fire Department was called and with the protection of police officers with shotguns worked on extinguishing the house fire that was consuming the whole house.

Once Burbank Fire had a majority of the fire knocked down they retreated to a safe zone until officers could locate the suspect.

At approximately 3:15 a.m. the next morning officers with the aid of several K-9s located the suspect hiding in a rear yard in the 1400 block of Catalina Street. The suspect did not comply with directions from police and K9s were deployed. The suspect was taken into custody after being bit on his arm. He was transported to a local hospital to be treated prior to being arrested and booked.

During the incident, no shots were fired by any police officer, and Burbank Fire Department returned to the house to extinguish any remaining fire.

Burbank police detectives along with a fire investigator will remain on scene through the day continuing their investigations.

The streets of Burbank were protected by Burbank Airport Police along with officers from the City of Pasadena. They answered routine calls that continued to come into the police dispatch center including some alarm calls and a traffic accident involving a drunk driver.

Anyone with information is asked to contact the Burbank Police Detective Bureau at 818-238-3210. If you wish to remain anonymous, call “LA Crime Stoppers” by dialing 800-222-TIPS
(8477), use your smartphone by downloading the “P3 MOBILE APP” or by using the website
www.LACrimeStoppers.org.

Additional pictures have been included in this gallery. (Click any picture to enlarge it.)