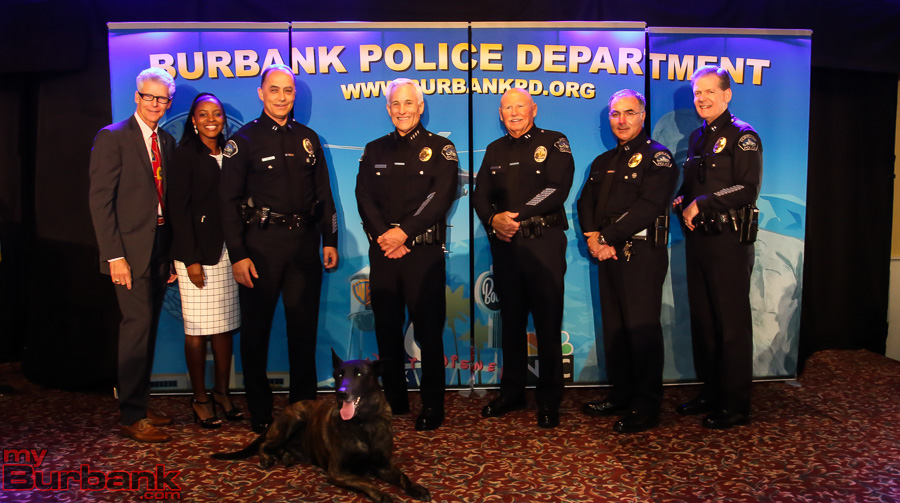 On Thursday, several of Burbank’s finest came out for The Third Annual Burbank Police Awards Luncheon to honor their bravest who went above and beyond the call of duty. The awards went to people who are both sworn in and those who are not, but they all serve the community we love so much.

The luncheon that was hosted by The Burbank Police Foundation happened in front of a packed audience at the Pickwick Gardens. Jim Roope from Westwood One delighted the crowd as he served as a the Master of Ceremonies of the Awards Ceremony.

The first honor went to Officer Cameron Brown, who received the Lifesaving Medal. On October 28, 2016, he was off duty at a Halloween Haunted House with his family and friends, when something scary happened that was unrelated to the holiday. His 56-year-old friend Jon Howard with special needs suddenly collapsed and he knew something was very wrong because his friend was not breathing and he could not find a pulse. He instructed someone to call 911 as he performed CPR on his friend until paramedics arrived. Due to his quick reaction, his friend is with us today. Had Officer Brown not done what he did in the dark, cramped area, his friend would not be alive today. That is why he awarded For the Actions in the Saving and Preserving of Human Life.

The next award not only went to more than one person, it also went to three different police departments. The Professional Esteem Award was given to 16 Burbank Police Officers, 5 members of Burbank-Glendale-Pasadena Airport Authority Police and 2 members of the Pasadena Police Department Air Operations Sections. On June 24, 2016, shortly after midnight, Burbank Police Department received a call that a man was acting erratically with a possible handgun at the Bob Hope Airport’s McDonald’s. When the police officers arrived on the scene, they realized the man did indeed have a gun. Then they instructed the employees and the civilians to leave the restaurant for their own safety. Once everyone was out, the officers started a conversation with the man who threatened to shoot them. The longer they engaged with him, the more erratic he became. He fired his gun at the ceiling and cops did not fire back at him. Instead, they continued to talk to him. After several more minutes, he pointed his gun at the cops outside the restaurant and fired a shot at them that broke a window. At this points cop fired back injuring the gunman. He left through a window, fell to the floor and shot himself with a fatal bullet. Ending the standoff with no one besides the gunman being injured or killed. That is why the 23 brave officers were honored for their Extraordinary Efforts Earning the Esteem of Your Colleagues and the Community.

Sergeant Brian Gordon was also awarded the Professional Esteem Award and his honor was 6 years in the making. On July 2, 2010, a man in the K-Mart parking lot was somehow able to disarm a cop and take that officer’s weapon. The suspect was high on heroin and meth, and was determined to escape. The gunman exchanged shots with the two officers injuring one critically and the other suffered a gunshot wound to the hand. The officers were able to subdue the man and take him in to be booked on two counts of the attempted murder of a police officer. At the time, Gordon was a Detective who was assigned to be the lead investigator of the case. He spent the next six years building up that case with the District Attorney’s Office and the suspect finally went to trial last year. On July 15, 2016, a jury found him guilty. In October, the suspect was sentenced for his crime and is currently serving out his 81-year sentence thanks to Gordon’s hard work on the case.

Jennifer Moran works at the Records Bureau for the Burbank Police Department. She has been with the Department since 1995 and has been the manager for seven years. She oversees operations processing and maintaining public records, data entry, distribution of public records and providing quality services to the public. Moran also serves as the administrator of the computer-aided dispatch report system used by the entire organization. For her hard work, she too received The Professional Esteem Award.

They also recognized a recent retiree Steevo. A Belgian Shepard who joined the K-9 Unit in 2010 when he was just 3 years old. He was trained in narcotic detection, sent out on SWAT incidents, searching and locating hidden suspects and he also spent time doing community outreach. Steevo is now living out the rest of his life with his former partner Officer John Embelton and his family.

Last March, Dianne Guerrero noticed a young lost boy crying and sitting on a bus bench and went over to see what was wrong with him. She calmed the boy down until police arrived, even missing her own bus so that he would not be alone. When the police arrived, they took the boy with him and reunited him with his family. It is her Selfless Service to the Community that earned her this reward.

They also award volunteers and this year’s recipient for the Volunteer of the Year is Soon Hee Newbold Rettig. When she is not donating her time with BPD, she is an accomplished musician, composer and conductor, proficient in martial arts, a firearms expert and a media producer. Since graduating from the Burbank Police Department’s Community Academy, she has spent countless hours producing and directing several PSAs and informational videos for them.

In 2009, Police Technician Sharise Barker joined their Records Bureau Data Entry Unit. Six years later, she transferred to the Investigations Division as their administration support to the Detective Bureau. She is always willing to lend a helping hand and that is why she is this year’s Non-Sworn Employee of the Year.

Then it was time for the final award and that was handed to the Officer of the Year. Sergeant Mark Stohl began his career there in 2000, and since then he has served as a Patrol Officer, a Field Training Officer, Gang Officer, Gang Detective and a Detective in the Eurasian Task Force. In 2012, he was promoted to Sergeant, went back to patrolling so he could supervise, and mentor young officers. Three years later, he returned to Investigations where oversees the property crime investigations. He was instrumental in getting Ford Explorers equipped with the latest technology added to the fleet. He continues to mentor officers of all statuses and age, and they continue to learn from him. That is why he was thanked for his Selfless Service to the Community.

After attending the Awards Gala, I learned how much hard work and dedication the Burbank Police Officers put into our community and I want to thank them all personally. From now on, whenever I see a Burbank Police Officer, I am going to shake their hand and/or give them a hug, and most importantly tell them thank you. We can honor the individuals for risking their lives for us personally by letting them know we appreciate them. Once a year, they get to tell themselves they are appreciated for everything they do and I am honored I was able to be a part of it.