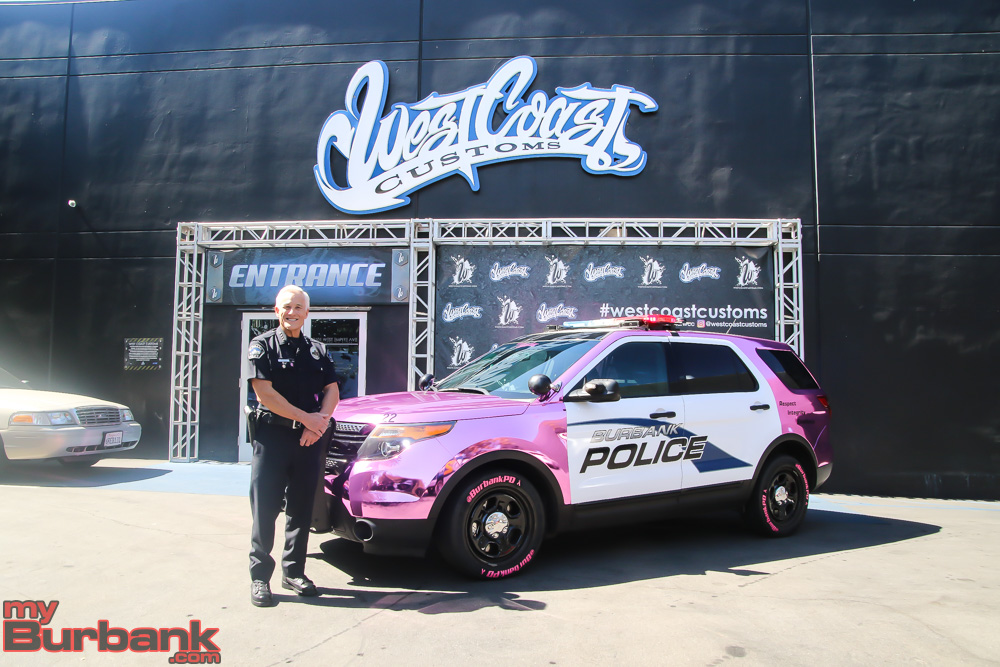 The new addition to the department’s line of cruisers will be used as a showcase vehicle to pay tribute to those who have fought breast cancer, and others who have been affected by it.

“One of our intentions is to take this vehicle to different venues throughout the month of October, and what we’re going to allow people to do is personalize messages on Post-Its that will attach to the car, and then display them in our station,” said BPD Chief Scott LaChasse.

Today, the pink cruiser is making an appearance at the Burbank Police Officers’ Association annual golf tournament at DeBell Golf Course. Tonight, it will be at the UMe Federal Credit Union on Magnolia during a free outdoor screening of Indiana Jones and the Raiders of the Lost Ark.

In November when the month of awareness is over, the Post-Its will be featured in a display case in the Burbank Police Station’s lobby, accessible for everyone to read.

“We need to get the message out there. Breast cancer is something that affects at least one in eight families,” said Chief LaChasse.

West Coast Customs, the multimillion-dollar business responsible for customizing the cruiser, has appeared on reality shows such as “Pimp My Ride” and “Street Customs.” In the past, the company has also collaborated with Microsoft, Nintendo, and Virgin to create originally designed vehicles.

“This is definitely going to be an identifiable vehicle driving down the streets,” said Ryan Friedlinghaus, chief executive of West Coast Customs, shortly before revealing the new cruiser.

Friedlinghaus and his team spent hours off the clock personalizing the car to achieve the look they wanted.

In addition to the chrome wrapping, the tires promote the BPD’s Twitter account, with @BurbankPD in pink lettering.

The BPD hasn’t decided on plans for the pink cruiser beyond October, but it will likely return to service as a patrol vehicle — except with black instead of pink.