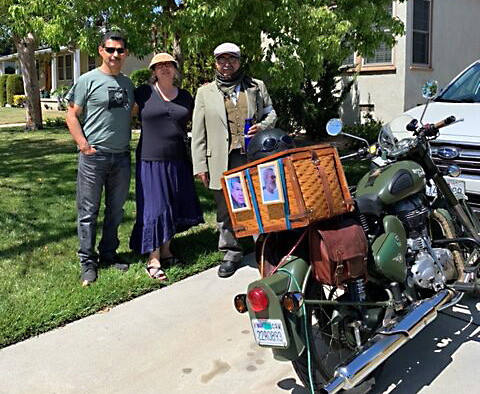 Burbank resident and business owner, Al Lira, showed his dedication to spreading the word on men’s health through his participation in the 2021 Distinguished Gentleman’s Ride this past Sunday, May 23.

DGR began in 2012 in Sydney Australia, and has become a worldwide annual event to speak up about the importance of men’s wellness issues, namely mental health and prostate cancer. Each year, groups can register their cities to participate, and anyone who wants to be a part of the ride may join. Riders drive their classic motorcycles around a set course in their town and gather sponsors to collect funds for the foundation. DGR then partners with the world’s largest men’s health organization, Movember, who allocates donations to continuing first-rate research on prostate cancer and mental health.

Lira, owner of Burbank’s A.L. Design Studio construction company, took a route on Sunday which consisted of a handful of stops and opportunities to see friends he’s been separated from since the pandemic began. He started his path at the Griffith Observatory, then traveled through Griffith Park to reach Forest Lawn Memorial. Next, Lira made his way around North Hollywood before riding along Magnolia Blvd. and passing through Downtown Burbank to end his travels at Urban Press Winery.

Taking this opportunity to get involved in a cause which addresses the subject of men’s health, and prostate cancer in particular, is personal and meaningful to Lira. He lost his father-in-law, William Donald Forbes, to prostate cancer following a recurrence of the disease. Furthermore, although he passed prematurely from a separate medical procedure, Lira’s father, Cecilio Lira, was diagnosed with stage 4 prostate cancer when he passed away. One of Lira’s stops along his ride was at Forest Lawn Memorial, where he visited his father’s gravesite and paid his respects as he carried on his legacy in this philanthropic effort.

“I wanted to do something [for men’s health] because I love my dad,” Lira said. “And [Forbes] was a great guy, too, and just a wonderful man.”

The DGR site states facts on men’s health, including that 3 out of 4 suicides are committed by men, and 510,000 men around the world die from suicide annually. Additionally, in regards to their physical well-being, the majority of times prostate cancer develops in men, there are no symptoms in its early stages. This makes it a worrisome and pervasive illness, especially seeing as it’s the second most diagnosed cancer amongst men.

“Because this is more personal to me, I just want to let people know that this is a problem,” Lira said. “Prostate cancer is a big killer of men and it happens more often than we care to think.”

Not only does The Distinguished Gentleman’s Ride gather funds for research and education on issues like prostate cancer and mental health, but it also gives people a chance to practice their love for classic motorcycles and vintage culture. Participants are required to wear upscale, retro attire and only a select few models of motor bikes are permitted for the event. As a result, Lira got to dress up for the ride and drove his Royal Enfield Classic 500, one of three motorcycles he owns.

Contributors to The Distinguished Gentleman’s Ride can join the event through registering under a participating city, or they can opt to independently register on behalf of a city that isn’t already involved. Lira chose the latter method, where he was able to stay near the Burbank area and determine his own route. He aims to inspire other Burbank residents to join him in supporting the cause now and in future years.

“As I was riding along, I thought that I could very well host next year and share [this] with others… because I’m just one story,” Lira said. “So, I will be working on a plan to include other riders in the Burbank community for next year, and several friends and family members expressed interest in participating and lending a helping hand to organize it.”

With his circle of dedicated sponsors, Lira was able to raise three times his original donation goal for DGR. The Burbank community exceeded his expectations in showing their encouragement, which made the event all the more memorable for Lira.

“The reception was better than I expected and I felt successful with my goals in terms of donations and community support,” Lira said.

Although The Distinguished Gentleman’s Ride of 2021 has commenced, Lira remains focused on sending the message that men need to prioritize their mental and physical health, and the well-being of those around them.

“The whole point is to just be aware that you need to take care of yourself,” Lira said. “I want to raise awareness to that because it just simply shouldn’t be happening. We should be able to be taking care of ourselves and others.”

To learn more about The Distinguished Gentleman’s Ride, visit their site here.