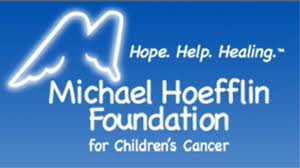 Santa Clarita, CA – In honor of Christopher Wilke, a 12-year-old boy who died of cancer of the bile ducts on March 20, 2014, Burbank resident and ultra marathon runner Roy Wiegand is planning to run from Angels Stadium in Anaheim to the Michael Hoefflin Foundation in Santa Clarita, on Friday, July 4. All proceeds from this run will go to the Michael Hoefflin Foundation for Children’s Cancer.

Wiegand’s son and Wilke were in the same Boy Scout Troop, and Wiegand was “blown away” by the amazing effect Wilke had upon so many people in his community. At the rosary for Wilke, Wiegand heard so many stories about the boy, who was an avid baseball player and loved the Angels.

“It really spoke to me,” said Wiegand, who for the past five years has done challenge runs to raise money for Lifewater International, an organization that builds water wells in developing countries. Last year he ran from San Luis Obispo to the Rose Bowl in Pasadena and raised $12,000 for this cause.

During the Run for Christopher on July 4, Wiegand will have a racing stroller with him, which can hold up to 100 pounds. He would love to give rides to kids along the way. 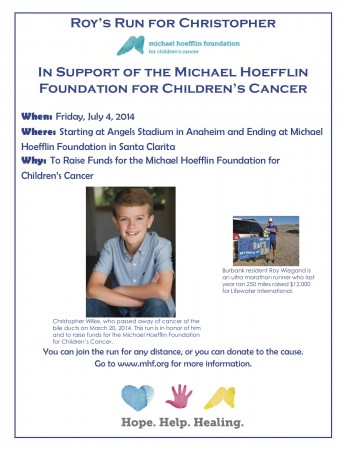 Donations for this run can be made directly to the Michael Hoefflin Foundation (www.mhf.org). People can join Wiegand along the way for any distance they would like.

Wilke’s baseball number was 48, so in an ideal world, Wiegand would love to raise $48,000 for the Foundation from this run. “I will raise as much as I can,” Wiegand said. “I feel like I am the lucky one. This is an amazing opportunity.”