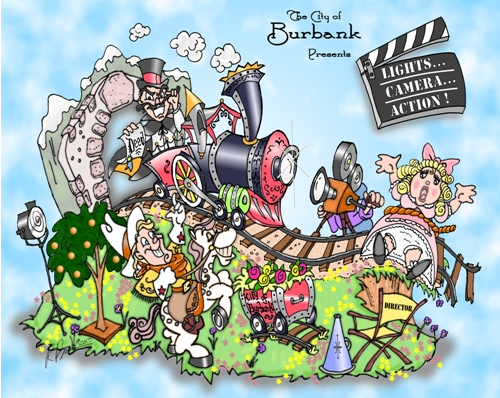 On Saturday, October 5, the Burbank Tournament of Roses Association holds its annual Open House and Craft Faire at the group’s construction and decorations site at the Burbank Water Power Yard on Olive Avenue. The event is open to the public from 11:00 a.m. to 4:00 p.m. People will have a chance to view the float’s progress in construction and shaping and shop for holiday gifts and crafts from a large selection of vendors.

Pasadena Tournament of Roses officials will also stop by at 6:30 a.m. for their first inspection of Burbank’s 2014 Tournament of Roses Parade entry. The float’s super structure is about half-way completed, as the Burbank Association volunteers have been working steadily on the float for the past several months.

“The first inspection is a mechanical inspection of the drive system. Then, the second inspection is a road test. This will be the first time we have taken the float outside and driven the float down the street to see how everything performs. It’s both exciting and a little scary, since we don’t know what surprises may come up,” comments Association Vice President Steven Edward. “This will also be Pasadena Tournament of Roses first look at the float under construction and their ability to provide feedback to us on any mechanical or safety issues they are concerned about.”

The Open House and Craft Faire is the major fundraiser for the Burbank Tournament of Roses Association. More than 25 vendors will be on hand, selling crafts, unique gifts and other handmade items. Handy Market will provide their famous BBQ and Tri-Tip sandwiches for lunch and fresh Kettle Korn will be made on site. The Association’s permanent Souvenir Shoppe will also be open, debuting the 2014 float merchandise of pins, patches, shirts, postcards and more. Additionally, 50 prizes will be raffled off.

“This is going to be a long day for all the volunteers, but also a very fun day,” adds Mr. Edward. “Overall, I’m very proud of all the hard work our volunteers have put into the float and this event. I hope everyone comes out to see the float and enjoy a fun-filled afternoon at the Craft Faire.”

“Lights… Camera… Action!”, the 2014 Parade entry, depicts a working movie set complete with props, sets and filming equipment. The float depicts a villain driving a train towards a damsel in distress who is awaiting rescue by a horse-riding hero. A camera man and director capture the action.Producer, director, writer and Falcon Theatre owner Garry Marshall has been chosen to occupy the director’s chair. The float was designed by contest winners Bill and Carol Cotter and Stacia Martin.

The Burbank Tournament of Roses Association is also celebrating the centennial anniversary of the City of Burbank’s first float entry in 1914 and the 82nd float entry overall. The nonprofit group relies on donations, fundraisers and volunteers to run the organization and build and decorate the City of Burbank’s annual entry in the Pasadena Tournament of Roses Parade, held every New Year’s Day. Burbank is one of just six “self-built” float builders who design, construct and decorate a float entry entirely by volunteers.

The Burbank Water Power Yard is located under the Olive Avenue overpass at 123 W. Olive Ave. in Burbank. Free parking is available at the nearby Metrolink parking lot. For more information and exact driving directions, visit the Burbank Tournament of Roses Association website.